US official refrains from denying past CIA apology to Turkey 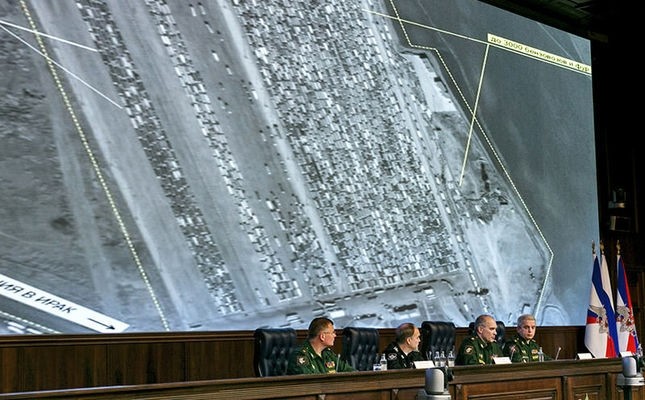 Russian top military officials speak to the media in front of an aerial image which they say is oil trucks near Turkeyu2019s border with Syria is displayed by the Russian Defense Ministry at a briefing in Moscow, Dec. 2, 2015. (AP Photo)
by Ragıp Soylu Dec 17, 2016 12:00 am

A U.S. official fell short of confirming the existence of what Turkish officials claimed an apology by the U.S. in 2015 over American officials' false accusation that Turkey had oil trade links with Daesh.

High-level Turkish diplomatic sources told Daily Sabah on Friday that the U.S. Intelligence Agency (CIA) and Secretary of State John Kerry had apologized to Turkey following a report by Turkish intelligence which proved them wrong in early 2015.

After careful examination of the CIA's documents, Turkish National Intelligence Agency (MIT) officials revealed that the geographic locations in the document that allegedly shows where Daesh's oil trade was conducted with Turkey in fact shows the asphalt plant of the Kilis municipality in southeastern Turkey.

A CIA spokesman declined to comment on the matter and referred Daily Sabah's inquiry to the State Department.

In response, a State Department official also refused to speak about the details of this specific diplomatic conversation but said that U.S. assessment on this issue had not changed.

"As we've said before, the United States flat out rejects the premise that the Turkish government is in league with ISIL to smuggle oil. We have seen no evidence to support such an accusation. Turkey plays a vital role in the counter-ISIL coalition. ISIL oil smuggling has, in fact, decreased over time thanks to efforts of the Turkish government and other counter-ISIL coalition members to target oil extraction and transportation infrastructure." the official said, using a different acronym for Daesh.

Even though Turkey is a member of the anti-Daesh global coalition, allegations claiming that Turkey has been smuggling oil with Daesh take place in the international press from time to time.

In 2014 and early 2015, several U.S. media outlets presented this allegation, however, when the Russian Federation started to use the same allegation against Turkey following the Russian jet crisis in Nov. 2015, U.S. officials categorically rejected the claims.