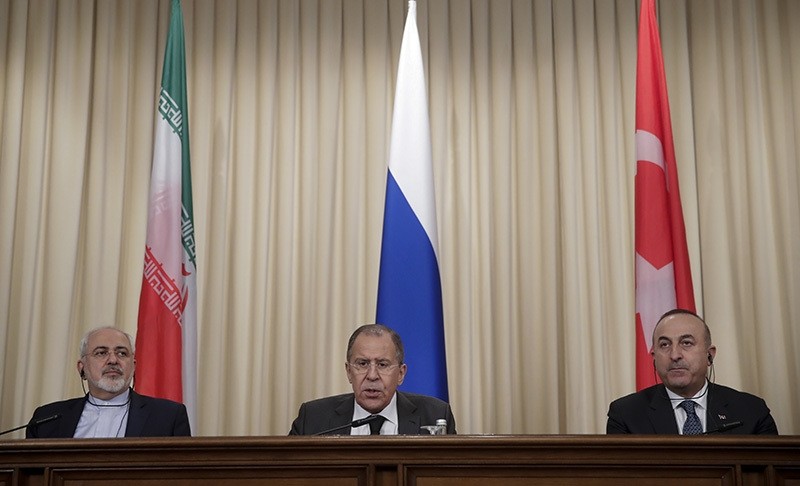 The crucial summit on Syria between Turkey, Russia and Iran has highlighted the importance of Syria's territorial integrity and ensuring nation-wide peace in the country, foreign ministers said at a joint press conference. The meeting took place as planned on Tuesday in Moscow, with the murder of Andrey Karlov, Russia's ambassador to Ankara, casting a shadow over the talks.

Foreign Minister Mevlüt Çavuşoğlu noted that it is important to impose a countrywide ceasefire in Syria and all three ministers pledged to 'act as guarantors' and provide assistance to prepare an agreement between the Syrian regime and the opposition.

"The ministers agree with the importance of widening the ceasefire, of free access for humanitarian aid and movement of civilians on Syrian territory," Russian Foreign Minister Lavrov said.

Lavrov noted that the cooperation between the three countries ensures the evacuation of civilians and opposition fighters from besieged Aleppo, and added that the evacuations are expected to end in a few days.

Çavuşoğlu added that almost 40,000 people have been evacuated from Aleppo until now.

Before the trilateral meeting, Turkey's Foreign Minister Mevlüt Çavuşoğlu and his Russian counterpart Sergey Lavrov held a bilateral meeting. Çavuşoğlu said that the attack on Russia's ambassador to Ankara was aimed at Turkish-Russian relations. He added that the Turkish people are just as upset about the death of the ambassador as the Russian people.

"Karlov was a good diplomat, a good person," he said, adding that the perpetrators of the attack must be identified. Çavuşoğlu also confirmed that a joint investigation team with Russian experts will be formed to reveal the motive behind the attack.

Lavrov said that Moscow is willing to seek agreements that will improve the humanitarian situation in Syria and help the political procession but "will not offer any concession to terrorists."

The street of the Russian embassy in Ankara will be renamed Karlov Street, after the murdered ambassador's last name.