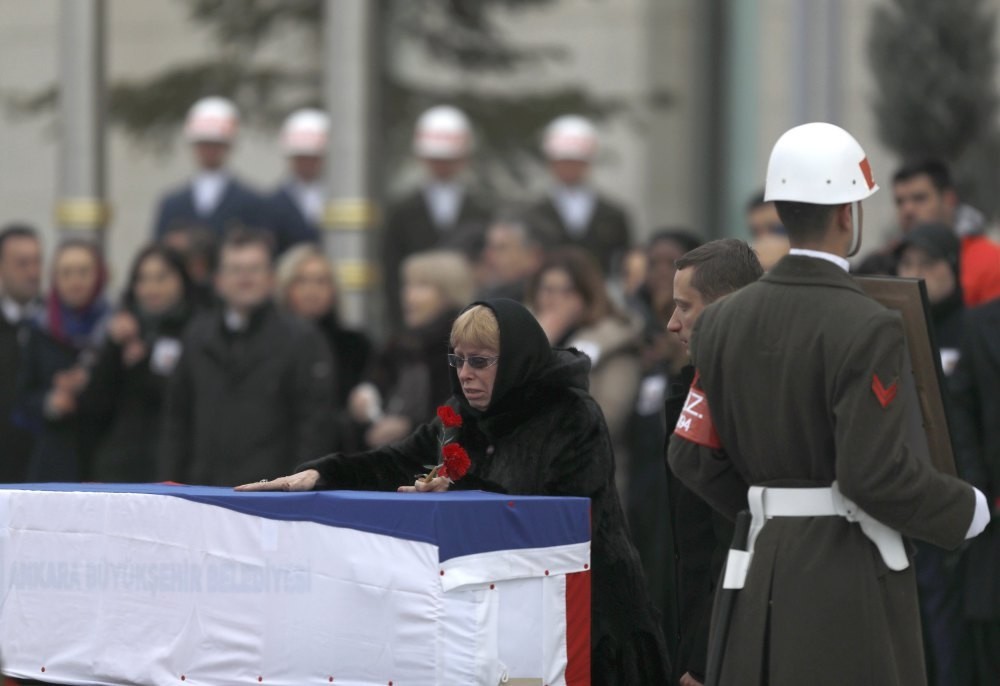 Late Russian Ambassador to Turkey Andrei Karlov's wife Marina reacts next to the flag-wrapped coffin during a ceremony at Esenboga airport in Ankara, Turkey, Dec. 2016.
by Merve Aydoğan Dec 21, 2016 12:00 am

Experts say the assassination of Andrey Karlov just before the crucial summit on Syria between Turkey, Russia and Iran is not expected to deteriorate Ankara-Moscow relations, on the contrary, the two countries can seek closer cooperation on political and security levels

In the wake of the tragic assassination of Russia's Ambassador to Ankara Andrey Karlov late Monday evening during the opening reception of an art exhibition in the Turkish capital, both President Recep Tayyip Erdoğan and Russian President Vladimir Putin both gave mutual statements immediately after the incident, describing the attack as a "provocation" aimed at harming Turkish-Russian relations. Russian experts have also underlined that relations between the Kremlin and Turkey will continue, expressing that ties on the political and social level are expected to be strengthened. On the evening of Dec. 19, just prior to the crucial summit between Turkey, Russia and Iran on Syria commencing on Tuesday in Moscow, the Russian envoy to Ankara was killed in a heinous assassination during the inauguration of the Contemporary Art Gallery in Ankara's central Çankaya district. Karlov was taken to the hospital immediately after being shot at least eight times before being pronounced dead shortly thereafter. Several bystanders were also wounded in the attack, which is thought to be a provocation and an act of terror, according to a spokesperson from the Russian Foreign Ministry who considers the assassination of Karlov to be a "terrorist act."

Speaking during the inauguration ceremony of the Eurasia Tunnel in Istanbul Tuesday, President Erdoğan said that those behind the attack have committed a treacherous act. The president once again offered his condolences to Russian President Vladim ir Putin and the family of the slain ambassador. Meanwhile, Prime Minister Binali Yıldırım said during the same ceremony that Russian Ambassador Karlov's murder is a vile provocation aiming to disrupt Turkish-Russian relations.

On Monday, President Erdoğan spoke in a video broadcast on several Turkish TV channels saying the slaying was "a provocation to damage the normalization process of Turkish-Russian relations. However, both the Russian and Turkish administrations are determined not to fall for this provocation." Analogous to Erdoğan, President Putin also stated that killing of Russia's ambassador to Ankara was "a provocation aimed at derailing Russian-Turkish ties and the peace process in Syria." Additionally, Kremlin spokesman Dmitry Peskov said on Tuesday that "murdering Karlov aims to prevent both the normalization process between the two countries and the reinforcement of Russia and Turkey's efforts to reach a political solution in Syria." Peskov confirmed that a Russian investigative team arrived in the capital Ankara, adding that such action is "reasonable" and that Russia and Turkey must work "effectively" against the perpetrators of the attack. 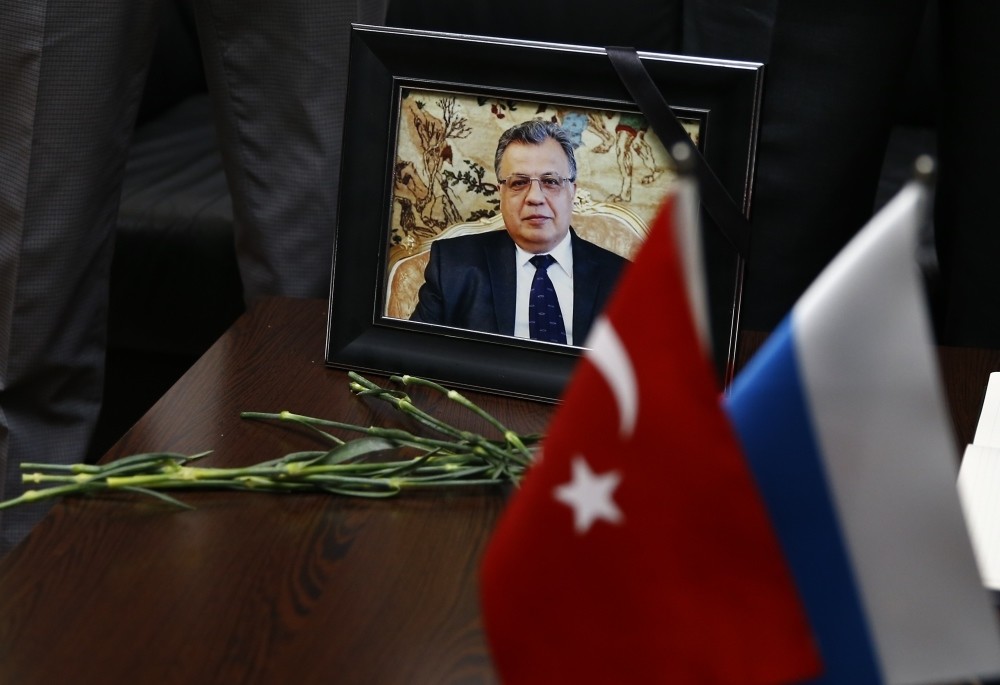 Photo of late Russian Ambassador to Ankara Andrey Karlov displayed with Russian and Turkish flag in Antalya on Dec. 20.

Dmitri Trenin, the director of the Moscow Center of the Carnegie Endowment for International Peace, told Daily Sabah that bilateral relations between the two countries are highly unlikely to be unhinged: "I do not expect the Russia-Turkey relationship to be derailed. On the contrary, I believe there will be closer political and security collaboration between Moscow and Ankara as a result of this attack," Trenin added. He also indicated that it is too soon to comment on the assailant's possible ties to the Gülenist Terror Cult (FETÖ). Similarly, the Chief Researcher at the Dialogue of Civilizations Research Institute (DOC Research Institute) Alexey Malashenko also stated that Turkish-Russian relations will not be negatively affected as he expected "closer cooperation" between the two allies.

Malashenko said, "I think that it will affect relations between the Kremlin and Turkey in a positive way because it proves that we have a common enemy. There were similar threats of terrorism in both countries so obviously this is a problem of terrorism and we have to fight against it." He further noted that both countries must be "even closer to one another." As senior Senator Frantz Klintsevich, deputy chairman of the Russian Upper Chamber's Defense and Security Committee, has stated recently that the attack "may be and it is highly likely that representatives of foreign NATO secret services are behind it," the Russian expert from DOC Research Institute dismissed the Russian senator's remarks and said it would be "anybody but NATO." Corresponding with Malashenko's remarks, the Director General of the Russian International Affairs Council Andrey Kortunov also told Daily Sabah that the allegation made by Klintsevich is not likely, adding: "I would abstain from actually commenting on such accusations until we have the full picture."

In regards to the possible derailment of Turkish-Russian relations in the wake of the assassination, Kortunov said: "I hope not, I think both sides understand that it is important to avoid another crisis in the relationship." He further noted that as the two countries share many common interests. The prominent expert from Russian International Affairs Council stated that "The fact that the Turkish foreign minister did not cancel his trip to Moscow is indicative of our intention to downplay the tragic event and ensure that it does not interfere with bilateral relations." While Kortunov underlined that "it is still too early to judge" the events and the possible outcomes, Emre Erşen, an academic at Marmara University, described the attack as "interesting" due to it happening shortly after normalization of Turkish – Russian relations and the trilateral meeting in Moscow.

"I believe that the attack will in fact cause the absolute opposite of what it intended to do toward Turkish–Russian relations. It seems that the two countries are likely to further enhance its dialogue and cooperation not only in security but also in intelligence and politics," Erşen added. He noted that such a positive outcome is evident especially due to the remarks made by the officials of the two countries and said "I believe that it will have a constructive effect on new dialogues between Turkey and Russia, especially regarding the matter of Syria."

Meanwhile, speaking at the funeral ceromony for Andrey Karlov, Deputy Prime Minister Tuğrul Türkeş defined the attack as a "provocation" and underlined that the attack came at a time when relations between Turkey and Russia were repaired. "The ambassador has become a symbol of the eternal friendship between Turkey and Russia. We will not let these terrorists reach their aim. The Turkey-Russia friendship is as strong as always. Putting forward our bileteral relations is our obligation to the ambassador. Rest in peace, Mr. Ambassador and my condolences to the Russian people," he said.
Last Update: Dec 21, 2016 12:32 pm
RELATED TOPICS