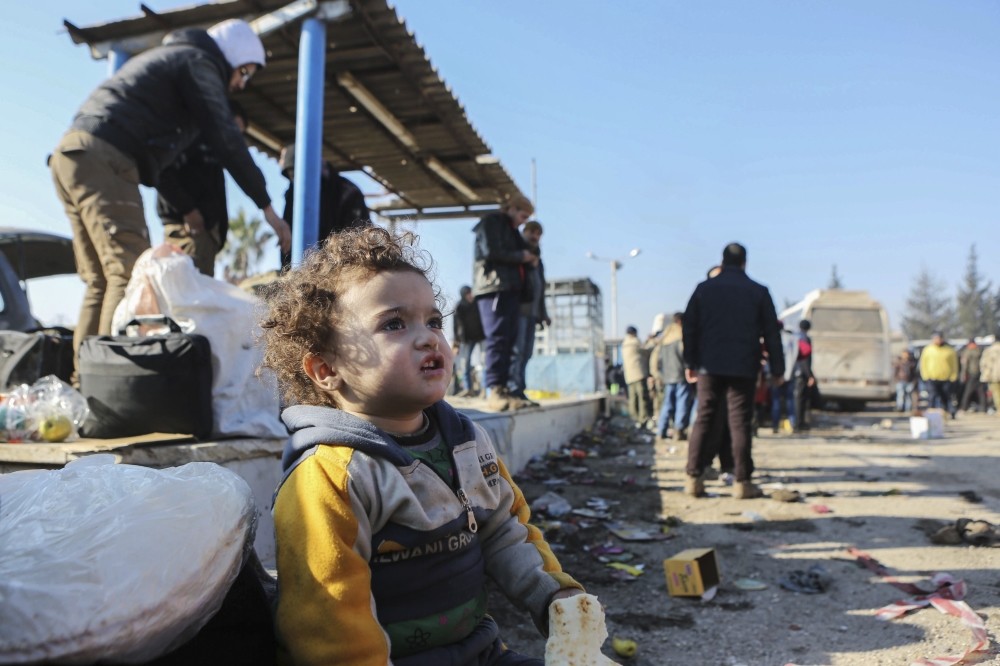 A Syrian child evacuated from the embattled Syrian city of Aleppo during the ceasefire arrives at a refugee camp in Rashidin, near Idlib, Syria, Tuesday, Dec. 20, 2016.
by Merve Aydoğan Dec 22, 2016 12:00 am

Turkey, Russia and Iran have reached an eight-step agreement on Syria, which aims at bringing an end to the ongoing humanitarian tragedy, as well as enhancing the fight against terror in Syria

With Turkey, Russia and Iran reaching an agreement on an eight-step "joint declaration" toward finding a solution to the ongoing humanitarian tragedy in Syria at a meeting in Moscow, a reproachful statement came from the United States, which was left on the sidelines. On Tuesday, State Department spokesman John Kirby said, "...we recognize that we weren't invited, that this was between Russia, Turkey, and Iran." Commenting on the Moscow meeting and the effectiveness of the Western states, especially the U.S., experts have stressed that the West has "failed" to retain its influence over the Syria crisis particularly throughout the escalating tragedy in Aleppo.

Following the meeting with Foreign Minister Mevlüt Çavuşoğlu and Iran's Javad Zarif, Russian Foreign Minister Sergey Lavrov announced late on Tuesday that a joint declaration was agreed on to find a solution in Syria. As Lavrov said, "The most efficient and effective format for solving the Syrian crisis is our current trilateral format," Çavuşoğlu stressed, "The best solution [for Syria] is a political solution and we believe in this. We have to focus on this." In that respect, eight steps are to be taken by Turkey, Russia and Iran in efforts to revive the political process and end the Syrian conflict.

The joint declaration foremost emphasizes the territorial integrity of Syria, saying, "Iran, Russia and Turkey reiterate their full respect for the sovereignty, independence, unity and territorial integrity of the Syrian Arab Republic as a multi-ethnic, multi-religious, non-sectarian, democratic and secular state." It further continues, "there could be no military solution to the Syrian crisis" while urging "the international community to cooperate in good faith to remove the obstacles on the way to implement the Moscow agreements."

Furthermore, other steps touched upon the evacuation of civilians from Aleppo: "Iran, Russia and Turkey welcome joint efforts in eastern Aleppo allowing for the voluntary evacuation of civilians and organized departure of armed opposition," while expressing commitment "to ensure the completion of the process without interruption and in a safe and secure manner." The fourth step includes "expanding cease-fire, unhindered humanitarian assistance and free movement of civilians throughout the country." The next step urged other countries on the ground to influence the situation: "Iran, Russia and Turkey have expressed their readiness to facilitate and become the guarantors of the prospective agreement."

"The Moscow Agreement will be instrumental to creating the necessary momentum for the resumption of the political process in Syria in accordance with the UNSC resolution 2254," the declaration said. "Ministers noted and welcomed Kazakhstan's offer to host relevant Syria meetings in Astana in the future." Finally, the declaration concluded by underlining the "determination" of all three countries to jointly fight against Daesh and al-Nusra while separating them from moderate opposition in Syria.

Commenting on the declaration, a prominent expert and the director of the Istanbul-based Al Sharq Forum, Galip Dalay, has said that though it is to reduce the human sufferings in Syria, it "cannot be a basis for a solution because reducing human suffering and a solution to the Syrian crisis are two different things. The fact that this meeting has not addressed any major demands of the opposition basically makes it unlikely to form the basics of a political solution in Syria." Dalay added that the Moscow meeting is not likely to lead to "a permanent solution in Syria." He further stated, "We must not forget that Russia, Turkey and Iran are not the only international players in Syria; therefore other players can still disturb the process achieved in Moscow."

Additionally, Oytun Orhan, an expert on the Middle East at Ankara-based think tank Center for Middle Eastern Strategic Studies (ORSAM), told Daily Sabah that the agreement "promises hope" for a solution in Syria. "Turkey, Russia and Iran are the most important actors in Syria. The agreement between these countries might give hope in reconciling the moderate opposition and the Syrian regime in central and northern Syria on the basis of anti-terror operations, if not for the whole Syrian crisis," he said, adding, "Seemingly Iran is the only troublemaker among these actors… As we have seen in Aleppo, Iran-backed militia groups and Iran-affiliated factions within the regime can violate agreements, despite Russia's influence." 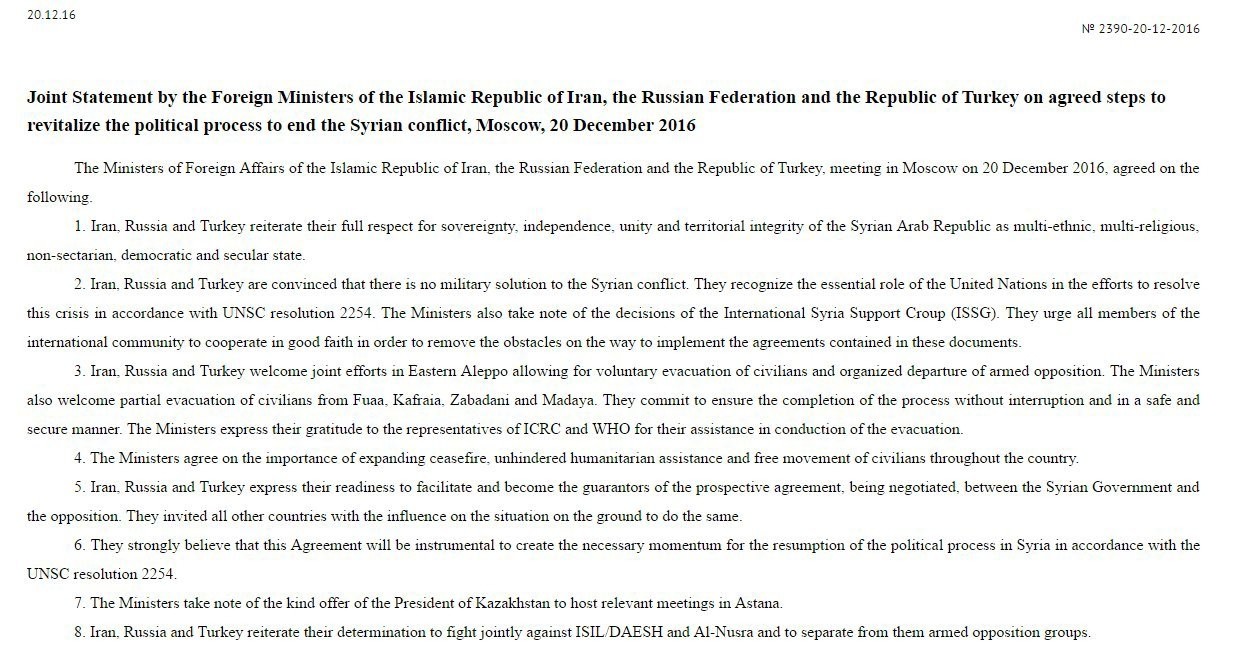 Shortly after the declaration, U.S. State Department spokesman Kirby also said it was too soon to judge if the talks were a success while stating that he held out little hope that the Moscow declaration would be different from the previous Syria talks. While Kirby confirmed that the U.S. was not invited to the meeting, Dalay said, "The U.S. and Western allies have procrastinated enough; basically they have failed to fulfill their promises." However, Dalay stressed, "Turkey should include some of the Western countries [in the talks] because as of now Russia and Iran are working with the Syrian regime and Turkey is the only one that is there acting on behalf of the opposition. This creates some imbalances and so Turkey [needs support] either from another regional country that is backing Syrian opposition, which could be Saudi Arabia or Qatar, or, a Western country."

Analogous to Dalay, Orhan said, "As it was seen during the Aleppo crisis, the U.S. and the West do not have an effective role in Syria." He further noted, "It is possible to say that the U.S. and the West have lost most of their influence in Syria; however, with the new administration in the U.S., this may change. We can evaluate their exclusion from the negotiations as a result of 'preserving the territorial integrity of Syria', which is expressed in the joint declaration."
Last Update: Jan 02, 2017 3:56 pm
RELATED TOPICS