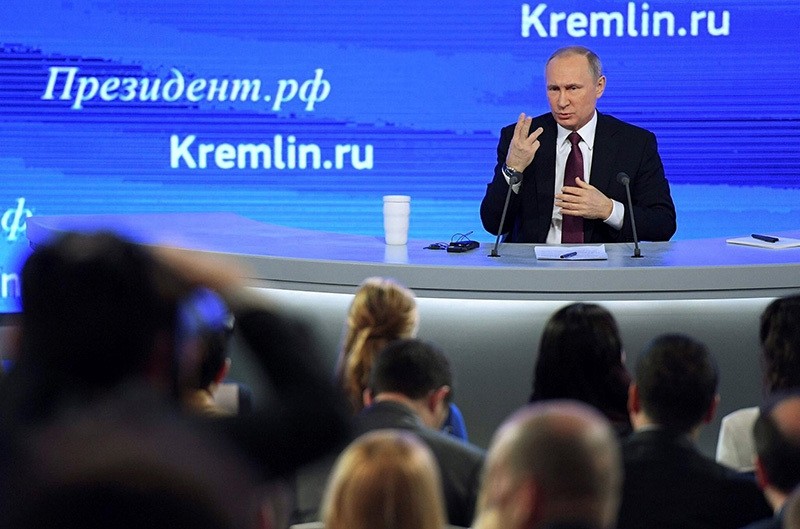 Russian President Vladimir Putin highlighted on Friday Turkey's "critical role" in establishing the cease-fire and the evacuation of civilians from eastern Aleppo, calling it the biggest humanitarian operation in the world.

Putin's remarks came during his 12th annual news conference which hosted more than 1,400 journalists. Speaking in a broadcast carried on Russian state-owned channel RT, Putin said: "This is the biggest operation in the world." The Russian leader also described trilateral cooperation between Turkey, Iran and Russia as a factor that played a "critical role" in ending the Aleppo crisis.

Putin claimed about 100,000 people had been evacuated from Aleppo.

A meeting was held Tuesday in Moscow between Russian, Iranian and Turkish foreign ministers who reached an agreement over the issuance of a joint declaration to ensure the evacuation of civilians and armed groups from eastern Aleppo. Putin said this could not have been achieved without the "active" cooperation of Turkey and Iran.

Russia's president said there was a need to sign a cease-fire deal in Syria. He recalled that Turkey and Iran had agreed on an earlier suggestion to bring together representatives of the Syrian regime and opposition in Kazakhstan.

Meanwhile, Foreign Minister Mevlüt Çavuşoğlu said that the talks will by no means function as an agreement regarding Syria's Assad staying in power.

Commenting on the purpose of the trilateral meeting in an interview with Anadolu Agency (AA) in Syria's Jeddah, Çavuşoğlu said that about 400,500 civilians have been evacuated from Aleppo and added: "In all sincerity, what we are trying to do has three aims: to achieve an immediate cease-fire, rescue people who are living under harsh conditions and provide them with humanitarian aid while helping them transition towards a political solution. We do not want cosmetic negotiations, we want negotiations that will achieve real results."

Commenting on the assassination of the Russian ambassador to Turkey, President Putin indicated that the tragedy will not damage Russian relations with Ankara in a statement made during an annual news conference Friday.

Speaking at an annual news conference, Putin said the murder of Andrey Karlov was an attempt to spoil relations between Moscow and Ankara.
Karlov was shot in the back and killed as he gave a speech at an Ankara art gallery on Dec. 20.Two countries took steps to de-escalate tension right after the incident.

Speaking about the killing of Andrey Karlov, Putin said: "I think it was an attempt on Russia and Russian-Turkish relations."

"We are fully aware of the importance of Russian-Turkish relations and we will certainly do anything to develop them," Putin added.

Karlov died after being shot multiple times at an art exhibition in the Turkish capital. He was delivering a speech when 22-year-old Turkish policeman Mevlüt Mert Altintas opened fire. Altintaş was later gunned down in an exchange of fire with security personnel. The evidence collected by intelligence sources has so far indicated that the assailant was linked to Gülenist Terror Group (FETÖ).

After a heated diplomatic spat started with the downing of a Russian bomber jet on Nov. 24, 2015, Turkey and Russia began the normalization process in June 2016. Relations between two countries became more cordial with the July 15 coup attempt of FETÖ, whose leader Fethullah Gülen resides in U.S. state of Pennsylvania.