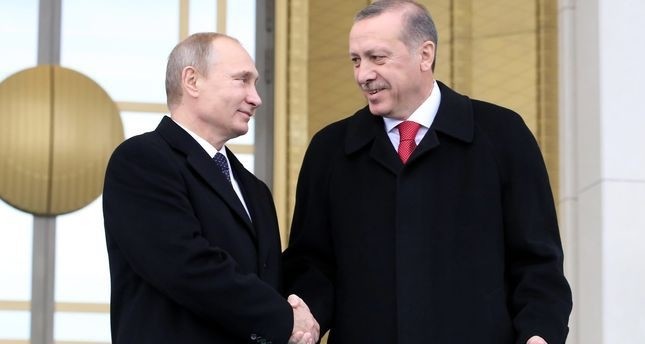 by Mustafa Kırıkçıoğlu Jan 02, 2017 12:00 am
Relations between Turkey and Russia had greatly improved in the last 15 years, especially in terms of economy, until calendars showed the date Nov. 24, 2015. A Russian Su-24 bomber was downed by the Turkish air force near the Syrian border, dealing a major blow to ties between the two countries.

Following the incident, Turkey provided radar data that the Russian planes had indeed violated Turkish air space, while Moscow insisted that the warplane had not crossed the border. The Kremlin accused Ankara for the incident and imposed sanctions to various Turkish sectors and prohibited Russian citizens from vacationing in Turkey.

Both leaders, Turkish President Recep Tayyip Erdoğan and his Russian counterpart Vladimir Putin exchanged harsh criticisms and ultimatums in the wake of the incident. Moscow said relations could only be repaired if Turkey meets three conditions: Apologizing for incident, paying compensation for the deceased pilot and punishing those responsible for the incident. Meanwhile, Erdoğan said that Russia should not sacrifice its relations with Turkey for the sake of "an error committed by a [Russian] pilot."Russia's intervention in Syria and its annexation of Crimea had already led tensions between the two countries to be on a rise for months before the jet incident. Turkey was, and still is, one of the countries that steadily declared the annexation is unlawful and has been expressing its concern for the rights of Crimean Tatars in the region. Also, after Russia began to carry out airstrikes on the predominantly Turkmen areas of northern Syria, Turkey underscored that people in the region have no ties with terrorist organizations, and called on Russia to fight solely against organizations such as Daesh, which they highlighted as the justification of their intervention in Syria.

Months later after the incident, rumors had started to spread that the Kremlin and Ankara began to discuss a detente to overcome the crisis. Eventually, eight months later, strained relations and tension between the two countries settled when President Erdoğan expressed regret for the downing of the Russian military jet in June, after which both countries took mutual steps. Russia started to lift the bans on importing Turkish products; Turkey started talking of a "$100-billion trade volume goal with Russia in 2023."

The failed July 15 coup attempt, which was perpetrated by the Gülenist Terror Group (FETÖ), somehow became a turning point for the Kremlin and Ankara, significantly expediting the heal in relations. Putin was one of the first leaders to declared support for Turkey's democratically-elected government during the attempt, and his gesture was met with gratefulness by Turkish officials. The two fighter jet pilots who downed the Russian jet in 2015 were also involved the coup attempt and were arrested following questioning. Many analysts voiced the strong likelihood that FETÖ, led by the U.S.-based Fetullah Gülen, intentionally targeted Turkish-Russian relations in the jet incident.

Relations entered a new phase following the Aug. 9 meeting between Erdoğan and Putin in St. Petersburg. Also, on Sept. 15, Turkish Chief of General Staff Gen. Hulusi Akar met with his Russian counterpart Gen. Valery Gerasimov, which was marked as the highest-level military contact between the countries since jet crisis. Gen. Akar then made a return visit to Gerasimov in Moscow in order to increase cooperation. In addition, a landmark deal was reached in economy in early October. The two countries signed an inter-governmental agreement on carrying out the construction of the planned TurkStream gas pipeline that would pump Russian gas to Europe under Turkish waters in the Black Sea.

Recently, amid the two countries' efforts to maintain a nationwide cease-fire in Syria, Russian Ambassador to Turkey Andrey Karlov was shot in the back and killed as he gave a speech at an Ankara art gallery on Dec. 20. As the ambassador's assailant Mevlüt Mert Altıntaş's ties with FETÖ began to surface, both leaders expressed that the incident is clear provocation to spoil relations between Turkey and Russia again and pointed the terrorist organization as the perpetrator.

Now, in the span of a year, as the two countries have largely overcome their crisis and having survived two major incidents, it seems their relations will be even better in 2017. Russia and Turkey not only agreed on the evacuation of Aleppo in the last days of 2016, which was described by Putin as "the biggest humanitarian operation in the world," they also played a key role in establishing a nationwide cease-fire in war-torn Syria.

"Turkey and Russia seem to be getting over the jet crisis and the murder of the Russian ambassador. Moreover, the possibility of peace in the Syrian crisis revealed that two countries can act together on regional issues," Eşref Yalınkılıçlı, Eurasian analyst and journalist for TRT World, told Daily Sabah.

"If the cease-fire brokered by Ankara and the Kremlin can be turned into durable agreement, a prominent obstacle against better relations will be eliminated, and we should hence expect relations to further improve in 2017."

Yalınkılıçlı underscored that both countries are still evaluating their economic ties and act in accordance with "commercial pragmatism," adding that since they see each other as big markets for their products, neither Russia nor Turkey can risk losing each other. "It's too early to start talking about strategic partnership. They need to make a lot of progress toward it. However, we should expect 'controlled optimism,' for relations in the next year," he said.

New economic projects and the course of the Syrian crisis will likely give direction to the future of relations between the two countries in 2017. However, taking into consideration how they overcame two serious incidents, bilateral ties in 2017 will most likely become even stronger than before the jet crisis in November 2015.
Last Update: Jan 02, 2017 9:08 am
RELATED TOPICS