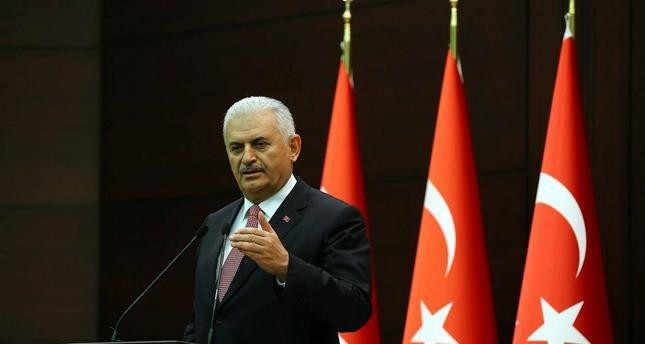 Prime Minister Binali Yıldırım is planning to visit Iraq sometime later this week, sources at the prime ministry told Anadolu Agency on Monday. The visit will be another indication for the end of the diplomatic crisis between the two countries that surfaced after the Iraqi government demanded that Turkey withdraw its troops from Bashiqa camp near Mosul, which is a base for the Turkish military to train the Peshmerga in their fight against Daesh terrorists.

According to the same sources, Yıldırım will visit the cities of Baghdad and Irbil on Jan. 5 and 6 respectively.

Last Friday, President Recep Tayyip Erdoğan held talks by phone with Iraqi Prime Minister Haidar al-Abadi. During their conversation, Erdoğan reportedly told al-Abadi that Yıldırım planned to visit Iraq sometime in January. He did not, however, provide an exact date for the prime minister's upcoming visit.

Sources from both sides have said that the visit would provide an opportunity to share their respective positions on recent regional developments and promote enhanced bilateral ties.

Turkey has a longstanding military training mission at Camp Bashiqa, where Turkish soldiers have trained both Peshmerga fighters and local tribal volunteers in combat techniques. The fighters are trained by Turkish military to fight against Daesh terrorist group, especially for their bid to take Mosul back.

In recent months, the mission's presence in Mosul in northern Iraq has led to tension between Baghdad and Ankara amid calls by some Iraqi lawmakers for Turkish troops to withdraw. The relations have recently seen a thaw as the Iraqi premier stated that bilateral relations are "back on track" with Turkey.

Abadi also announced that about more three months were needed to remove Daesh from Iraq.

Abadi announced the new plan after responding to comments by the commander of the U.S.-led coalition supporting Iraqi forces that it would take as long as two years to eliminate Daesh and its cells in Iraq and neighbouring Syria.

The PKK's presence in Sinjar near Mosul is also another issue that is likely to be discussed during Yıldırım's visit in Iraq.

Speaking to Rudaw, KRG PM Nechirvan Barzani on Monday said that the PKK must leave Iraq's Sinjar for the sake of the stability of the region.

"Our policy is clear. We have thanked all parties helping us to liberate Sinjar people from Daesh. Now, the PKK's presence in Sinjar is an obstacle for regional stability and development. For that we hope that the PKK will leave the region, for the region's and the PKK's sake," he said.