Turkey not sidelining US from Astana talks despite ‘confidence crisis’ 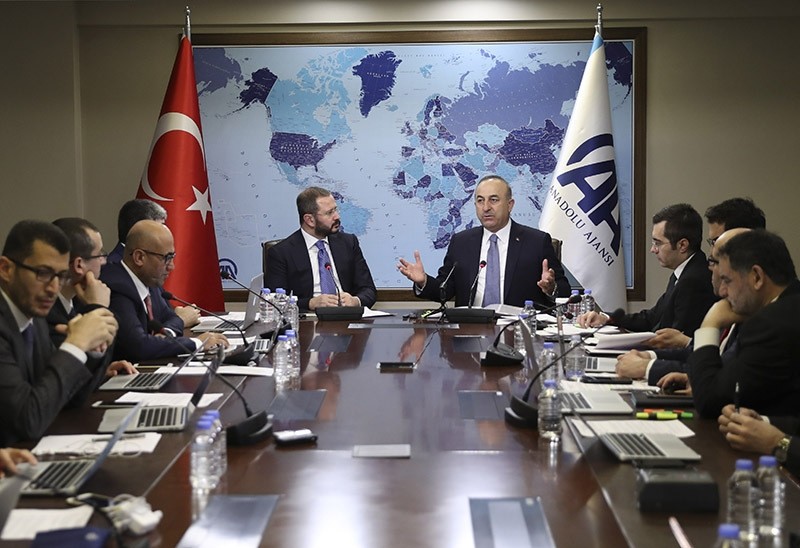 Even though Turkey has constantly expressed frustration with the outgoing U.S. Barack Obama administration for failing to keep its promises regarding Syria, Turkey doesn't have any intention of sidelining the U.S. from Syrian peace talks.

"The U.S. is definitely not excluded from this [Astana] process; there is a mutual understanding with Russia on this issue," said Foreign Minister Mevlüt Çavuşoğlu on Wednesday during an interview at the AA Editors' Desk. "We did not start this process to exclude others. We need to get support from everybody to establish permanent peace [in Syria]. This resolution needs to be concluded under the umbrella of the United Nations," Çavuşoğlu added in the interview, which took place hours before his departure to New York to meet the UN secretary general.

In the last week, Turkey and Russia agreed on a plan for a nationwide cease-fire deal in Syria after the UN officially adopted a resolution that supports efforts by Russia and Turkey to end violence in Syria and jump-start peace negotiations. Foreign Minister Çavuşoğlu said that talks to end the Syrian conflict begin Jan. 23 in Astana, Kazakhstan; he also announced that Russian officials would visit Turkey Jan. 9-10 to discuss the framework of these peace talks. Even though the Syrian opposition has largely respected the Turkey, Russia and Iran-brokered nationwide cease-fire deal, there have been numerous reports of violations by Bashar Assad's regime forces. Consequently, about 10 Syrian opposition groups announced on Jan. 3 that they were suspending talks in Astana due to cease-fire "violations" by the Assad regime. Commenting on this matter Çavuşoğlu emphasized: "The Astana process could be frustrated if increased cease-fire violations are not halted. Now that the cease-fire has been implemented, we see that it is being violated. The opposition is keeping its word, but there are violations on the other side. The main parties violating the cease-fire are the regime, Shiite militias and Hezbollah."

An adviser to Iranian Supreme Leader Ali Khamenei said on Jan. 3 that fighters from Lebanon's Shiite Hezbollah group would not leave Syria despite the cease-fire deal. Touching on this matter, Foreign Minister Çavuşoğlu said the cease-fire is very fragile and Iran must keep its promises: "Iran must exert pressure on Shiite militias and the Syrian government [to adhere to the cease-fire deal]."

Meanwhile, President Recep Tayyip Erdoğan said yesterday that Turkey's cross-border operation in Syria would continue on to Manbij, after liberating al-Bab from terror groups. Speaking to local administrators at the Beştepe Presidential Complex in Ankara, he said: "New measures have been taken to ensure completion of the al-Bab operation in the shortest period. After that, we will move to clear other areas of terrorists as well, beginning with Manbij." Commenting on the recently established cease-fire, President Erdoğan said that there are diplomatic efforts by Turkey and Russia to achieve a political solution in Syria. "Our biggest aim is to ensure the successful conclusion of this process to end the pains our Syrian brothers and sisters have been living," he added.

Turkey is having a 'confidence crisis' with the U.S.

Regarding U.S.-Turkish relations, Foreign Minister Çavuşoğlu acknowledged that the U.S. is a very important ally for Turkey with their ongoing cooperation in various fields, while underlining that Turkey is having a "crisis of confidence" with the U.S. "This are several reasons for this confidence crisis. Obama and Erdoğan agreed that the Democratic Union Party/People's Protection Units (PYD/YPG) in Manbij would move east of the Euphrates in northern Syria; however, the U.S. did not keep its promises in Manbij and provided weapons to the PKK-offshoot YPG," said Çavuşoğlu. Criticizing the U.S.-led anti-Daesh coalition's support to Turkey in the ongoing al-Bab operation, Çavuşoğlu said that the Turkish public is also reacting to this indifference. "We could not get air support in the al-Bab operation. Hence our people ask us why we keep these [coalition forces] in Incirlik. We allowed not only the U.S., but also other countries' planes at Incirlik to fight together. If you don't provide air support to the most critical operation, then what are you here for?" he said. "More than words, we want to see tangible support from the West. Obama called our president last night. We expect concrete support in the face of terrorism," Çavuşoğlu added.

In addition to his remarks on foreign policy, Çavuşoğlu said that Turkish authorities have identified the Istanbul nightclub attacker, who ruthlessly killed 39 people on New Year's Eve, however, he did not provide any details on the terrorist's identity.