Turkey will not tolerate presence of PKK terrorists in Sinjar, PM Yıldırım reiterates during Iraq visit 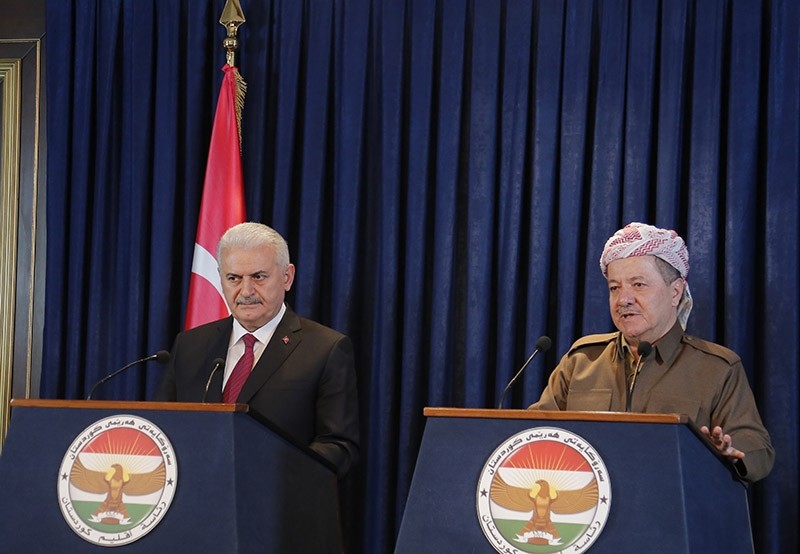 After jointly agreeing with Iraq to fight against the PKK and Daesh during his Baghdad visit, Prime Minister Binali Yıldırım restated at his second destination in Iraq, the Kurdistan Regional Government capital Irbil, that Turkey will not allow PKK presence in Iraq's Sinjar region

Prime Minister Binali Yıldırım said Sunday the PKK's presence in the Sinjar region in northern Iraq is unacceptable by Turkey and added that terrorist organizations such as Daesh, the Gülenist Terror Group (FETÖ) and the PKK, are common enemies of Turkey, Iraq and Syria.

On the second stop of his Iraq visit after Baghdad, Yıldırım was welcomed by Kurdistan Regional Government (KRG) Prime Minister Nechirvan Barzani on Saturday night in Irbil. Speaking at a joint press conference with KRG President Masoud Barzani in Irbil, Yıldırım underscored that the PKK has been carrying out attacks against Turkey from Iraqi soil, and that they will do whatever is necessary to end this situation.

"The PKK's nest in the Sinjar region and their spread toward to the West cannot be accepted by Turkey. This is not just Turkey's security issue but also yours [the KRG] and the Iraqi government's. For that reason, joint efforts are necessary to solve it," Yıldırım said. Turkey and KRG officials previously warned the PKK many times to depart from the Sinjar Mountains. Also, Iraq's Haider al-Abadi said last week that Iraq will not allow the PKK to use the country's sovereign territory as a base to damage Turkey. During the conference, Yıldırım also touched upon the fight against terrorism, saying Turkey's operation against Daesh is continuing on its southern border.

"Our common aim is to curb this lunatic organization. The international community should give more support to Turkey regarding this issue," he said.

While the KRG and Iraq's central government along with international coalition forces began an operation in Mosul in order to drive Daesh terrorists out of the city last year in October, Turkey launched Operation Euphrates Shield in Aug. 24, 2016, with the Free Syrian Army (FSA) in northern Syria to clear its borders from Daesh. Both operations are still continuing.

Meanwhile, KRG leader Barzani said at the conference that the fight against terrorism is everyone's duty and called for more support in the struggle.

He added that they want to improve cooperation with Turkey in all fields. Yıldırım also expressed his gratitude to Barzani for his support in Turkey's fight against FETÖ.

Upon Turkey's request after the failed July 15 coup attempt, the KRG seized 38 schools in northern Iraq, including a university run by FETÖ, last October that had a total of about 14,000 students.

After meeting with Masoud Barzani, Prime Minister Yıldırım also met with KRG Prime Minister Nechirvan Barzani in Irbil yesterday. The two leaders are expected to focus on the fight against Daesh as well as economic relations.

Following his official meeting in Irbil, Prime Minister Yıldırım and Barzani visited peshmerga forces fighting against Daesh and stationed on the front in Zerdek Mountain.

Yıldırım was accompanied by Turkey's Defense Minister Fikri Işık and the KRG officials during his visit.

Yıldırım arrived in the Iraqi capital of Baghdad on Saturday in a visit that will officially mark the end of the diplomatic spat between the two countries and start a new dialogue for cooperation in key areas, such as the fight against Daesh and the PKK, in addition to trade, energy, and water.

A meeting closed to the press was held between Yıldırım and his Iraqi counterpart al-Abadi.

In a joint press conference with al-Abadi after the meeting, Yıldırım said the issue of Turkish troops at the Bashiqa camp near Mosul will be solved with Iraq in a friendly way and in line with clearing Daesh terrorists from the region. Explaining that the troops were stationed in Bashiqa out of a necessity, Yıldırım said great efforts have been taken to clear Daesh from the region.

Yıldırım added that the two parties have agreed to make the necessary efforts in coordination with peshmerga and Iraqi troops to clear Sinjar from terrorist elements, referring to the PKK presence in the area. "For us, terror is the same no matter where it comes from. Therefore, Sinjar poses a primary threat for Turkey and we thank the Dear Prime Minister's sensitivity to ignoring this threat. We are ready to do the necessary cooperation in this issue too," Yıldırım said.
Last Update: Jan 08, 2017 10:37 pm
RELATED TOPICS