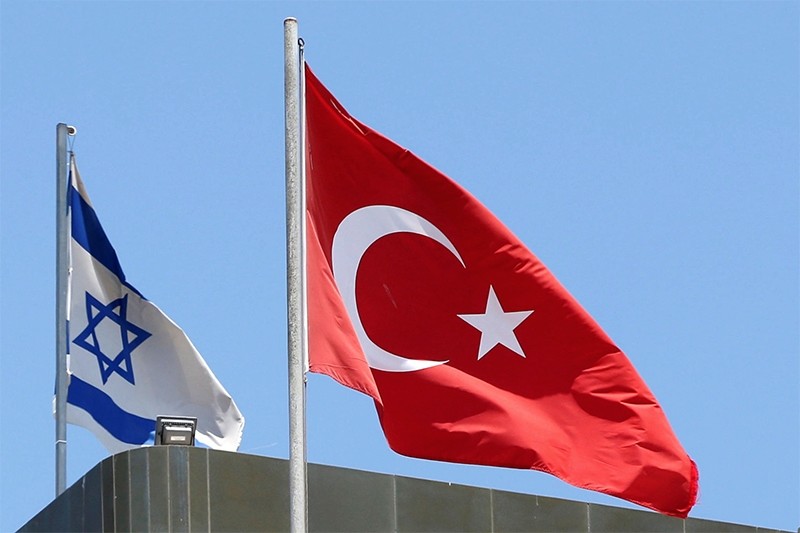 After nearly six-and-a-half-years, a reconciliation deal was reached between Turkey and Israel and ratified in Parliament on Aug. 20 last year before being signed into law by President Recep Tayyip Erdoğan on Aug. 31. Diplomatic sources speaking to Daily Sabah affirmed that relations between the two countries are set to continue unabated with "collective efficacy" being a priority. In addition, diplomatic sources added that high-level official visits would be held in the upcoming period between Turkey and Israel and that relations are expected to be enhanced in three fundamental areas, including updating the free trade agreement, Turkey's participation in the tourism expo and accessibility to visas.

Turkish-Israeli relations sank to a new low after the 2010 Mavi Marmara flotilla incident in which Israeli soldiers attacked a Turkish humanitarian aid vessel bound for Gaza in international waters, worsening already tense relations over the blockade of the Gaza Strip, virtually freezing ties between the two countries. After both sides withdrew their ambassadors in the wake of the incident, Turkey and Israel began to seek ways for reconciliation years after the incident. On that note, Turkey and Israel synchronously appointed new ambassadors as part of the normalization process. He said that there are two kinds of matters in relations: "naturally developing matters" and "matters in need of an additional boost."

"The naturally developing matters include rather easy topics such as matters of tourism, culture and sports. Those have never been frozen; regardless of instances where political or defense relations were deteriorating. However, other matters that require further dialogue and discussion include defense and military relations and economy and trade," according to the source. Underlining that "collective efficacy" is the key to relations between Turkey and Israel, the diplomatic source said that political consultations are slated to begin in a month, followed shortly by high-level official visits between the two countries.

As part of the normalization process, Israeli Energy and Water Resources Minister Yuval Steinitz attended the 23rd World Energy Congress in Istanbul in October 2016, marking the first ministerial-level visit since the raid on the flotilla in 2010. During the visit, Turkey and Israel agreed to establish a mutual energy dialogue, further strengthening ties between the countries following a six-year pause in relations.

Though an official visit by Foreign Minister Mevlüt Çavuşoğlu to Israel is yet to be determined, the possible visit of a Turkish foreign minister to Israel is already being described as a "landmark" in bilateral relations by diplomatic sources. Stressing that Turkey's position on the the matter of Palestine has not changed since the normalization process, with sources emphasizing, "Palestinians are the primary beneficiaries of the normalization between Turkey and Israel."

"Turkey's approach to Palestine matters is not limited to the topic of Hamas or other groups of individuals; contrarily, we are speaking about democratic principles... The matter is not related with Hamas or al-Fatah groups. In fact, the separation [between the Palestinians] must end, and Palestinian politics must unite under one for its national interests and for peace… The consensus we have reached with Israel is not about Hamas, but rather about showing support to the Palestinians," said the sources.

Meanwhile, diplomatic sources drew attention to three major areas to enhance bilateral relations in the upcoming period: Turkey and Israel will update the scope of the Free Trade Agreement, with sources noting that the economy of the two countries are "complementary" with each other. The other area includes tourism, which has continued between the two countries regardless of formerly frozen relations. Diplomatic sources added that Turkey is expected to participate in the International Mediterranean Tourism Market (IMTM) in Tel Aviv from Feb. 7 to March 5 for the first time, while sources affirmed that a high-level official visit is expected from Turkey's Culture and Tourism Minister Nabi Avcı who is likely to attend the expo.

Responding to Daily Sabah's question about the possibility of visa-free travel between the two countries, diplomatic sources confirmed that this is on the agenda in upcoming political meetings between Turkey and Israel. Though sources have affirmed that Turkey strongly desires easing the visa matter, speedy and efficient visa accessibility, especially for businessmen and technicians, is on the agenda.