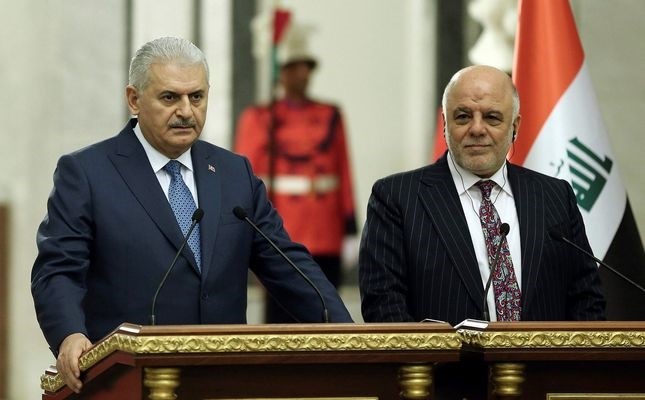 Prime Minister Yu0131ldu0131ru0131m over the weekend met with his Iraq counterpart, Haider al-Abadi, during his visit to Baghdad to discuss security issues, especially the continued PKK presence in the country.
by Ali Ünal
Jan 12, 2017 12:00 am

Although Iraqi-Turkish relations were strained due to the debate on the presence of Turkish security forces at the Bashiqa camp near Mosul last year, relations are back on track with the recent two-day visit of Turkish Prime Minister Binali Yıldırım to Baghdad and Irbil.

Turkish Defense Minister Fikri Işık and Iraqi Ambassador to Ankara Dr. Hisham al-Alawi both confirmed on Wednesday that Turkey and Iraq are now on the same page in solving the Bashiqa matter.

Defense Minister Işık stated that the status of Turkish troops providing training to local forces at the Bashiqa camp will be reassessed with Iraqi officials once the area has been cleared of Daesh terrorists, asserting that the issue will be resolved in a friendly manner.

"Turkey respects Iraq's territorial integrity and unity," the defense minister said, while adding that the presence of Turkish troops in Iraq is a decision made out of necessity, not merely a choice, according to Prime Minister Yıldırım.

"Turkish soldiers in the Bashiqa camps have been providing tremendous service in the fight against Daesh. More than 700 militants have already been killed and more than 6,000 local forces have been trained by our soldiers in Bashiqa," Minister Işık said on Jan. 11.

''Thus, the main purpose of the Bashiqa camp is to clear Daesh from the region completely. The Turkish and Iraqi sides will reassess the Bashiqa issue after that point," Işık said during a press briefing in Kırıkkale.

Ambassador Alawi also shared the same thoughts during his press conference on Wednesday, saying, "Both the Iraqi and Turkish prime ministers have agreed that to solve Bashiqa issue as soon as possible in a manner which respects Iraq's sovereignty."

Alawi also said on Jan. 11 that, ''In terms of 'when to do it,' the information currently available indicates that the two sides have agreed to implement the process of withdrawing military forces from the Bashiqa camp when the military operation to liberate Mosul has ended."

The ambassador went on to say, "We expect to complete the Mosul liberation operation within three months and I think this is a realistic expectation. Over the last 10 days, there has been significant progress in the operation. For the first time since the operation began our security forces have reached the Tigris River and this is a major development.''

"We can discuss further cooperation in bilateral relations after solving this matter. I wish we had resolved this issue a long time ago,'' he said.

Turkey has recently expressed its opposition to the presence of the PKK terrorist organization in northern Iraq's Sinjar region. Commenting on this issue, Ambassador Alawi said that there is an agreement between the Iraqi central government and the Kurdistan Regional Government (KRG) to liberate Sinjar jointly, running a military operation to maintain peace and stability in the region.