Ankara's rapprochement with Moscow not to the detriment of relations with US, Europe 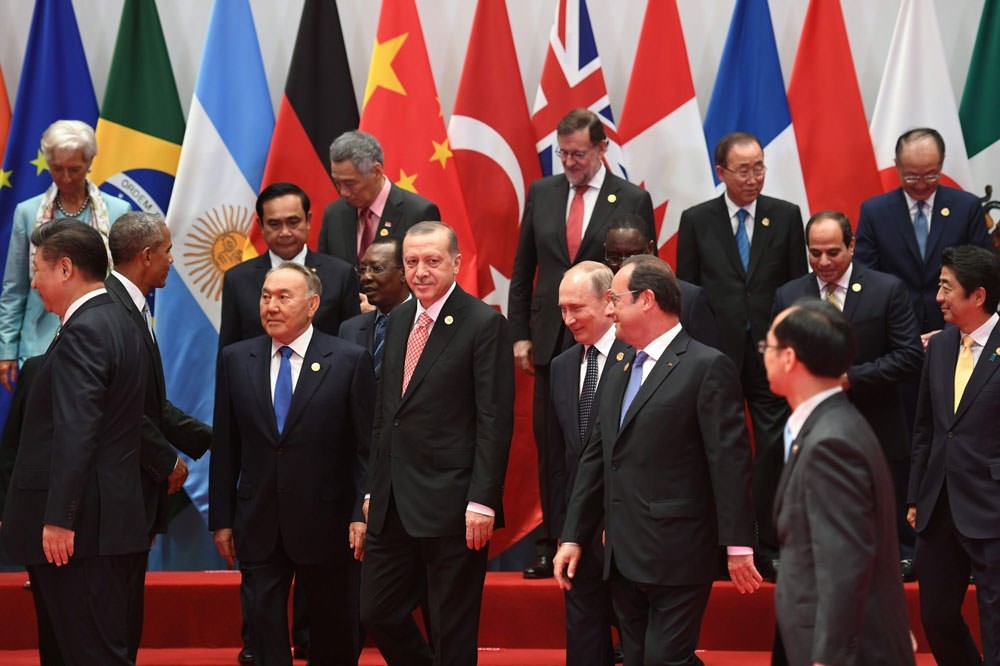 Presidential Spokesman İbrahim Kalın has reiterated Turkey's position regarding its relations with the U.S. and the EU, saying Ankara's close ties with other countries should not be interpreted as moving away from its Western allies

Turkey does not consider foreign policy a "zero sum game" and the country's rapport with Russia would not come at the expense of relations with the U.S. and Europe, presidential spokesman İbrahim Kalın said. As rapprochement between Turkey and Russia continues to strengthen diplomatic ties between the two countries it has also begun to yield positive results in terms of regional politics as recently seen with the Syrian cease-fire agreement brokered between Ankara and Moscow and the upcoming Astana peace talks. Meanwhile, a number of Western officials have begun to express their concerns regarding these diplomatic shifts, citing an increasingly "eastern drift" in Turkish foreign policy.

Commenting on the issue during a meeting with foreign correspondents in Ankara on Jan. 13, the presidential spokesman said Turkey maintains a comprehensive perspective on the issue of foreign policy, asserting, "Turkey is a member of NATO and part of the Western alliance, however, this does not mean that we need to cut all relations with Russia, China, African countries or even Latin America. To the contrary, we have a 360-degree perspective on foreign policy issues and our strategic geopolitical location compels us to maintain that perspective." Spokesman Kalın went on to say, "In fact, not only our multidimensional regional interests but also our geopolitical position in the region requires and nearly compels us to maintain strong relations with all neighboring countries and regional powers."

Since Ankara and the Kremlin began to mend relations that deteriorated after the downing of a Russian jet by Turkish forces on Nov. 24, 2015, the implications of a Turkish-Russian rapprochement have raised concerns that Turkey might be turning its back on the West.

Despite Western concerns, presidential spokesman Kalın underscored that Turkey's rapprochement with Russia would not come at the expense of relations with the U.S. and Europe.

"There are times when we agree more with Russia on certain issues than the U.S. but, at the same time, we find common ground with the U.S. and the EU regarding other issues and have successfully implemented more agreements with the latter than the former or any other country," he said.

Describing Turkey's foreign policy as a balanced policy towards the east and the West, Kalın said that in today's circumstances it is nearly impossible to reduce foreign policy to merely one block.

"Foreign Policy is a very dynamic process and I believe this balanced policy towards east and west, Europe and the Arab world is in our best interest and we will continue to fervently try to maintain this. In a world where there is an increasing need for interdependence, one cannot entirely reduce foreign policy to a single block. To the contrary, one must maintain a broader perspective."

"Challenges regarding security and the economy also force us to have a broader outlook. We are trying our best to maintain strong relations with our Western allies as well as with our eastern neighbors and allies. It's not a mutually exclusive process but can be a mutually empowering process if carefully managed and navigated thoroughly," he continued.

Kalın also emphasized that Turkey's cooperation with Russia and Iran to solve the Syrian crisis is not a matter of strategic choice.

"It's not a matter of huge strategic choices when you look at crisis situations such as Syria. You just want to yield results on the ground. If can do it with Russia, you do it with Russians. How can you find a solution in Syria without engaging with Russia and Iran?'' he said.

Underlining that Turkey does not consider foreign policy a "zero sum game," Kalın said that no one in the Turkish administration questions Turkey's NATO membership. Adding that they still consider Turkey's EU membership as a strategic goal despite all the problems and obstacles Kalın said, "We spent 11 years to open and close a chapter, partly due to the spreading Euro-skepticism and the hostile notions towards Turkey and the minorities. If the EU has enlargement fatigue, the Turkish side is frustrated and in fatigue of not being able to progress in its EU bid."

"Nevertheless, I still believe we can overcome these issues. If the European Commission can come up with a proposition to finalize the Schengen zone visa liberalization process, to which we are ready to contribute, then this can become a success story. Moreover, regarding the refugee issue, nothing is barring Europe from providing more aid; I believe their actions fell short of what was promised. We still have 3 million refugees in the country, this has not changed. Therefore, we are expecting more support from the EU,'' he concluded.
RELATED TOPICS