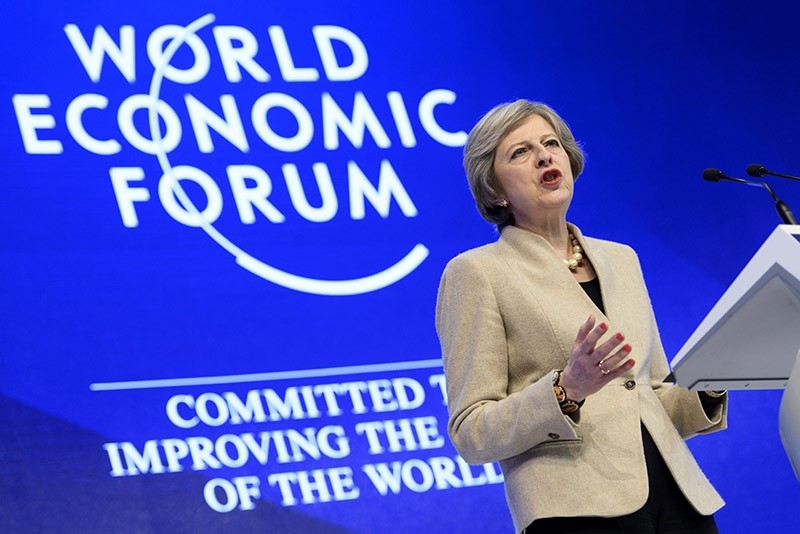 Britain's Prime Minister Theresa May speaks during a plenary session in the Congress Hall at the 47th Annual Meeting of the World Economic Forum (WEF) in Davos (EPA Photo)
by Daily Sabah with AFP
Jan 24, 2017 12:00 am

British Prime Minister Theresa May will visit Turkey on Saturday and meet President Recep Tayyip Erdoğan, a spokesman said on Tuesday, as the British leader seeks to prepare for post-Brexit trade deals.

The visit will be May's first to Turkey as prime minister and she is expected to fly directly to Ankara from the United States, the Downing Street spokesman said.

May is planning talks with senior Republicans in Philadelphia on Thursday and then U.S. President Donald Trump in Washington on Friday in what will be his first meeting as president with a foreign leader.

May is making preparations for Britain to leave the European Union but has said she wants her country to be "truly global" and has started talks on possible trade deals with several countries including Turkey.

Britain and Turkey are also both part of the US-led coalition that has carried out air strikes against Daesh and other terrorist groups in Syria since 2014, as well as being involved in peace negotiations between the Syrian regime and the armed opposition.

British foreign minister Boris Johnson visited Ankara in September, when he brushed off as "trivia" an offensive poem he wrote about Erdoğan before joining the government last year.

Johnson, who is partly of Turkish ancestry, instead called for a "jumbo free trade deal" with Ankara.

He also condemned the attempted coup in Turkey in July last year as a "violent... deeply anti-democratic (and) deeply sinister" attack on democracy.

He said the Gülenist Terror Group (FETÖ) of U.S.-based preacher Fethullah Gülen - which Ankara blames for the failed coup - "seems to me to have many aspects of a cult" and vowed to take action if necessary against affiliated groups in Britain.

On July 15, a small military junta linked to FETÖ attempted to topple the democratically elected government in Turkey and bring martial law into effect. The attempt was prevented by the military loyal to the government along with police units and millions of people in favor of democracy. A total of 246 people, mostly civilians, were killed and nearly 2,200 people were injured. The government and opposition parties have united in condemnation of the coup attempt, denouncing it in the harshest terms and underscoring their determination to preserve democracy and rule of law in Turkey.

The group led by Fetullah Gülen is said to be behind a long-running campaign to overthrow the state through the infiltration of Turkish institutions, particularly the military, police and judiciary.

Ankara has stepped up demands for Gülen's extradition from the U.S. state of Pennsylvania since July 15.