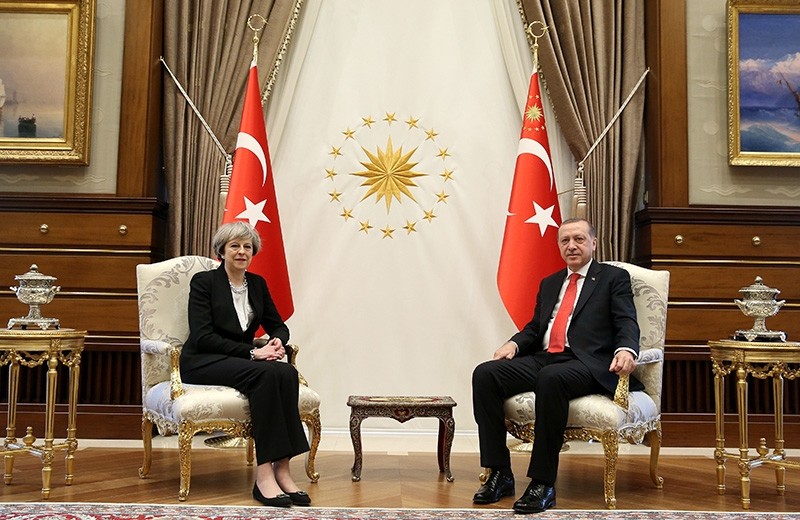 British Prime Minister Theresa May made her first visit to Turkey as prime minister on Saturday after flying directly to Ankara from the United States, where she became the first foreign leader to meet new U.S. President Donald Trump.

Before meeting with President Recep Tayyip Erdoğan at the Presidential Complex, May paid a visit to Atatürk's mausoleum Anıtkabir in the capital, where she attended a wreath laying ceremony with British Ambassador to Turkey Richard Moore. 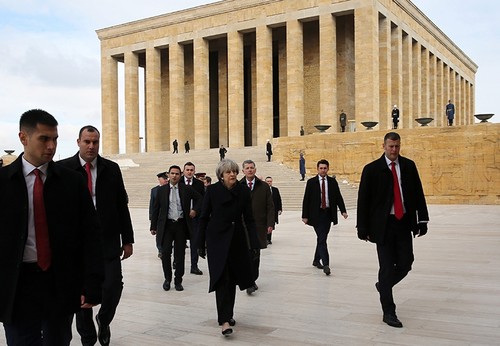 British Prime Minister Theresa May, center, walks during a visit to the mausoleum of Atatürk, in Ankara, Saturday, Jan. 28, 2017 (AP Photo)

She then headed to the Presidential Complex in Beştepe, Ankara, where President Erdoğan welcomed her, and the two leaders held a meeting that focused on the joint fight against Daesh terrorists, strengthening political ties and the crisis in Syria.

In a joint press conference after the three-hour meeting, President Erdoğan stated that the two leaders had the chance to discuss political, military, economic and cultural issues while also addressing regional problems and the war on terrorism.

Erdoğan said that Turkey and the UK would continue to be in solidarity as NATO two members, and added that future cooperation in the defense industry between the two countries was also discussed. Erdoğan also said Turkey and Britain would take an important step on Turkey's TF-X fighter jet project.

Speaking on Turkey-UK economic relations, President Erdoğan expressed his aim to increase Turkey's $15.6 billion of trade volume with UK to $20 billion. Erdoğan reminded that the first step for a strategic partnership between the two countries was taken in 2010, and underlined that cooperation in the energy sector was also possible in addition to defense industry.

The two leaders agreed on the importance of a collaboration regarding the Syrian crisis and the upcoming Geneva talks on the Cyprus issue.

After the press conference, May headed to a meeting meeting with Prime Minister Binali Yıldırım at the Prime Ministry Office in Çankaya.

Her visit aims to enhance cooperation between Turkey and the U.K. in the fields of defense, security and trade.

Britain and Turkey are part of the U.S.-led coalition against Daesh and other terrorist groups in Syria since 2014, and have beein involved in peace negotiations between the Assad regime and the moderate opposition forces.