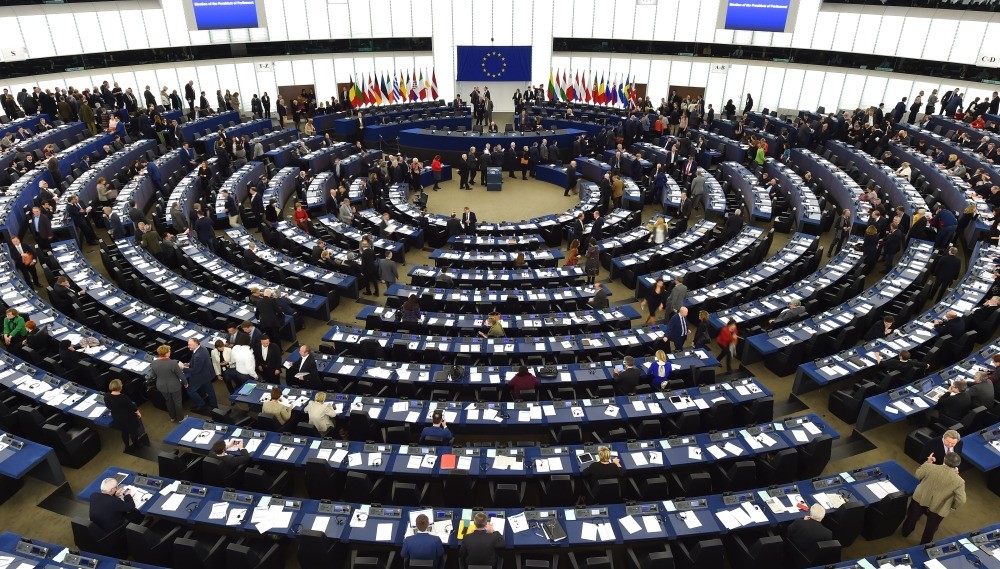 EU member states have become a safe haven for fugitive terrorists fleeing Turkey and it is considered the primary reason for the diminishing public support for EU accession in Turkey.
by Mehmet Solmaz Feb 07, 2017 12:00 am

Despite the European Parliament holding a vote calling for an end to accession negotiations with Turkey, some MEPs told Daily Sabah that more constructive approaches to strengthen ties with their ‘key ally' Turkey is needed

Nearly two months after President of the European Council Donald Tusk told reporters in Brussels that members of the bloc had agreed to hold a summit with Turkey to discuss the migrant deal and various other issues, there has still been no date set for the summit which is expected to take place in March, marking the anniversary of the deal.

Amid rumors that the EU is waiting for the results of the accelerated Cyprus reunification talks and the upcoming referendum in Turkey regarding the constitutional amendment package in the country's bid to switch to a presidential system, EU leaders have praised Turkey for fulfilling its responsibilities regarding the migrant deal while Ankara argues that the bloc has only kept a tiny portion of its promises.

The EU's reluctance to shoulder its share of the burden of the refugee influx from war-torn Syria, coupled with the EU's stingy handling of funds allocated to deal with the Syrian refugee crisis in Turkey as well as its insistence that Turkey alter its counterterrorism laws for visa-free travel to EU member states have heightened tensions in Ankara and angered the Turkish public.

Nearly one year after the migrant deal, which saved the EU from its largest refugee crisis since World War II, it seems that the deal has done little to contribute to strengthening ties with Ankara. Brussels' calls for cooperation have not extended beyond mere weak rhetoric and President of the European Council Donald Tusk objectively admitted that the EU's demands regarding counterterrorism laws would be difficult for Ankara to meet, citing the recent increase in terrorist activity across the country and the numerous terrorist groups threatening the Republic of Turkey which is still reeling from the July 15 coup attempt. Tusk admitted that "I know that this is not a sign of a bad intention but objectively, they [Turkey] are in a very difficult situation." On the other hand, EU Foreign Policy Chief Federica Mogherini also stressed the importance of keeping all channels of communication open to allow both sides to listen to each other's concerns, adding that Turkey is of strategic importance for the bloc's policies on Syria, the Caucasus, Cyprus and the region's energy sector.

Despite the positive rhetoric, no steps have been taken since these statements were made, compelling leaders in Ankara to announce publicly that the possible eradication of the migrant deal altogether - as well as a referendum to ask the nation if it wants to continue accession negotiations with the EU - are now on the table.

Since the deal was signed in March last year, dozens of terrorist attacks and a coup attempt have left Turkey reeling and raised questions regarding the EU's role in recent events. The EU is accused of providing shelter to terrorists and propagating terrorists' rights to blow themselves up in major cities across Turkey and bombard the Turkish Parliament in Ankara. EU member states have become a safe haven for fugitives fleeing persecution in Turkey and are considered the primary reason for the diminishing public support for EU accession in Turkey.

While the European Parliament (EP) held a vote calling for an end of accession negotiations with Turkey, some MEPs have voiced more constructive approaches to strengthen ties with Turkey. Amid rising xenophobia and anti-Turkish circles among EU institutions, some European politicians and an expert on foreign policy told Daily Sabah that the EU must exert mutual understanding and deeper cooperation with "key ally, "Turkey."

Responding to questions regarding the significance of the timing of the summit expected in spring which correlates with the timing of the possible outcome of the Cyprus reunification talks, Slovenian Member of Parliament Franc Bogovic of the European People's Party (EPP) said he assumes the timing is "no coincidence." Looking on the bright side, Bogovic said in case of reunification "There would then be a Turkish speaking, Muslim minority inside the EU and this could be a huge opportunity to mend the soured relationship between these two important partners: Turkey and the EU." Bogovic said he also believes that President Tusk wants to wait for the outcome of the referendum in Turkey, as suggested by the Turkish Parliament. "The vote in parliament was widely criticized in Europe. I find it interesting, by the way, that the fact that the change will solely be effective after a majority of the Turkish population has endorsed it, goes so unnoticed in Europe. It is proof of the functioning democratic mechanism of the Turkish state, which so many are fast to make a de facto dictatorship: I want to see the dictator, who allows a referendum," said Borgovic, while criticizing those who refrain from showing respect for the democratic electoral system in Turkey for not only its leaders but also its parliamentary deputies from around the country. When asked if he thinks Ankara would end the migrant deal and provide safe passage to refugees if the deal collapses, Bogovic said "The negative effects on Europe would be immense - especially along the Balkan route and for my country of Slovenia." The Slovenian member of parliament argued that both sides would suffer and such development would only help "Russia and Iran and also the populist forces in Europe." Stressing that the deal with Turkey is right and pleasant at first sight, "but the EU needs to have a plan B and maybe even a plan C. Unfortunately we cannot rely solely on Turkey's good will on this important issue."

İlhan Kyuchyuk, a Bulgarian-Turkish member of parliament for the Group of the Alliance of Liberal and Democrats for Europe (ALDE), said the main talks to be held during the Turkey-EU summit will focus on the implementation of the migrant deal, adding that it is not healthy to integrate the Cyprus talks with the summit issue. He said the migrant deal should play a constructive role between the two "strategic partners" and warned that both sides should refrain from causing it to collapse. Kyuchyuk went on to say he believes in recent years, mutual relations have been built on an emotional basis rather than a pragmatic one, noting: "It is time for both sides to begin to have a new, open dialogue which will set the tone for our future relations. Ties have to be built on clearly defined priorities both in the short and long term so that the EU and Turkey stay committed to such priorities rather than being diverted from them. I would like to see Turkey become as close as possible to the EU because I continue to believe that the things that unite us are far greater than those that divide us," he said. The Bulgarian member of parliament also emphasized that he has recently hosted an event dedicated to energy perspectives in Cyprus. "I believe that despite hydrocarbon discoveries not being part of official negotiations, the relationship between Cyprus and energy cannot be understated and deserve to be properly analyzed to understand their potential in terms of diplomatic relations in the region, economic gains, and – of course – unification and stability. In this regard, the general opinion that was expressed during the event was that the reunification of the island will, on the one hand, contribute to regional development and strengthen cooperation in the energy sector on the other," said Kyuchyuk.

MEP Zdechovsky: EU must do all it can to preserve deal with Turkey

Czech Member of the European Parliament Tomas Zdechovsky stressed that in the case of a negative outcome at the planned EU-Turkey summit, the agreement known as the "Migrant Deal" may collapse. Defining the possible incident as a "threat," Zdechovsky said he is convinced that no one in Europe wants a repeat of the massive waves of migrants seen prior to the deal. Zdechovsky said, "For the EU, Turkey is an indispensable partner in solving the migrant crisis. Thus, the EU must do everything [it can] to come to an agreement with Turkey and keep the deal." Zdechovsky also added that he does not think the ongoing Cyprus negotiations have anything to do with the EU's failure to announce a date for the anticipated summit. On the other hand, responding to questions regarding the flow of gas through the eastern Mediterranean into Europe via the TANAP Pipeline - a likely scenario if peace is achieved in the Cyprus talks -Zdechovsky said, "There is no doubt that decreasing [Europe's] oil dependency on Russia and Iran would be beneficial for both Turkey and the EU. The details are, however, a matter of further negotiations among all concerned states."