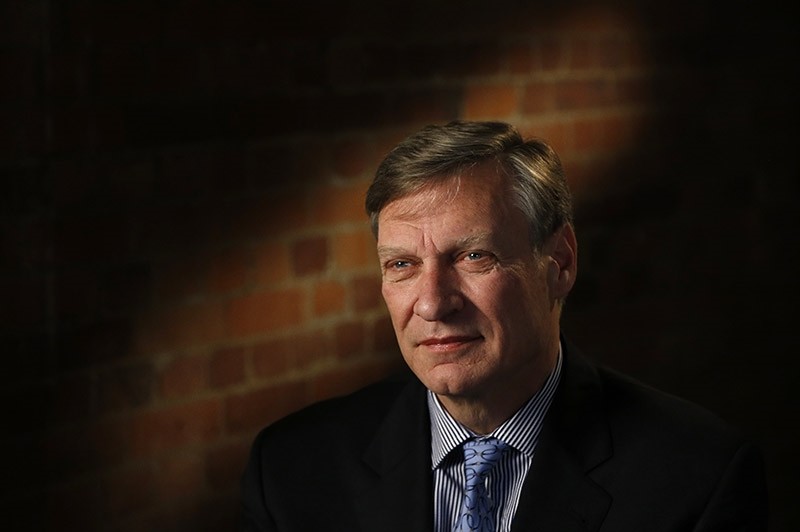 U.S. businessman Ted Malloch, Donald Trump's potential choice as envoy to the EU, speaks to The Associated Press during an interview in London, Thursday, Feb. 9, 2017 (AP Photo)
by Daily Sabah Feb 20, 2017 12:00 am

Speaking in a live, televised interview on Turkish broadcaster NTV on Monday, Malloch said that he believes, "[Trump] will get along really well with President [Recep Tayyip] Erdoğan."

Malloch went on to say that "Turkey is a member of NATO and our strategic partner," while emphasizing the importance of Gülen's extradition and acknowledging that he was behind the July 15 failed coup attempt.

He continued by saying that President Trump and his Turkish counterpart have held very constructive meetings over the phone and may meet in person in the coming months.

"I think Trump is aware of Turkey's significance in not just commercial ties but also on political and military issues," Malloch said, adding that he expects the two leaders to meet face-to-face at the upcoming G20 Summit in Hamburg, Germany.

Although Malloch said that he cannot comment on the official policies of the Trump administration, he acknowledged that he would not be surprised if Washington were to adopt a significantly different military strategy regarding the PKK terrorist organization's Syrian offshoot the Democratic Union Party (PYD).

"We must take into consideration that there are terrorists who fight against Turkey," Malloch said, adding that the Trump administration is expected to announce its military plan within the next 60 days.

Even though Turkish-American ties had previously taken a nosedive under former President Barack Obama's administration, which openly supported the PYD's armed wing the People's Protection Units (YPG) and were reluctant to process Turkey's multiple extradition requests for FETÖ leader Fetullah Gülen, bilateral relations seem to have entered a much more productive and collaborative phase since Trump took office.

The extradition of FETÖ leader Gülen, who resides in Pennsylvania, was also discussed between President Recep Tayyip Erdoğan and U.S President Donald Trump in their most recent phone conversation.

Meanwhile, Justice Minister Bekir Bozdağ, who will soon speak with his U.S. counterpart Jeff Sessions on the issue, recently said that Ankara is optimistic that under the Trump administration, the U.S. will agree to extradite Gülen. Rebuffing claims that there has been a lack of evidence submitted to U.S. officials, Bozdağ said, "There is more than enough evidence," referring to Turkey's requests that Gülen be temporarily detained and formally extradited.

Under a 1979 treaty between the U.S. and Turkey, the former is obliged to temporarily detain the coup plotter and meet extradition requests upon Turkey's fulfillment of legal submittal requirements. Turkey submitted official evidence to the U.S. in October of last year regarding the Gülen network, which formed a quasi-state within the Turkish state and attempted to topple the government via a vicious coup attempt on July 15.