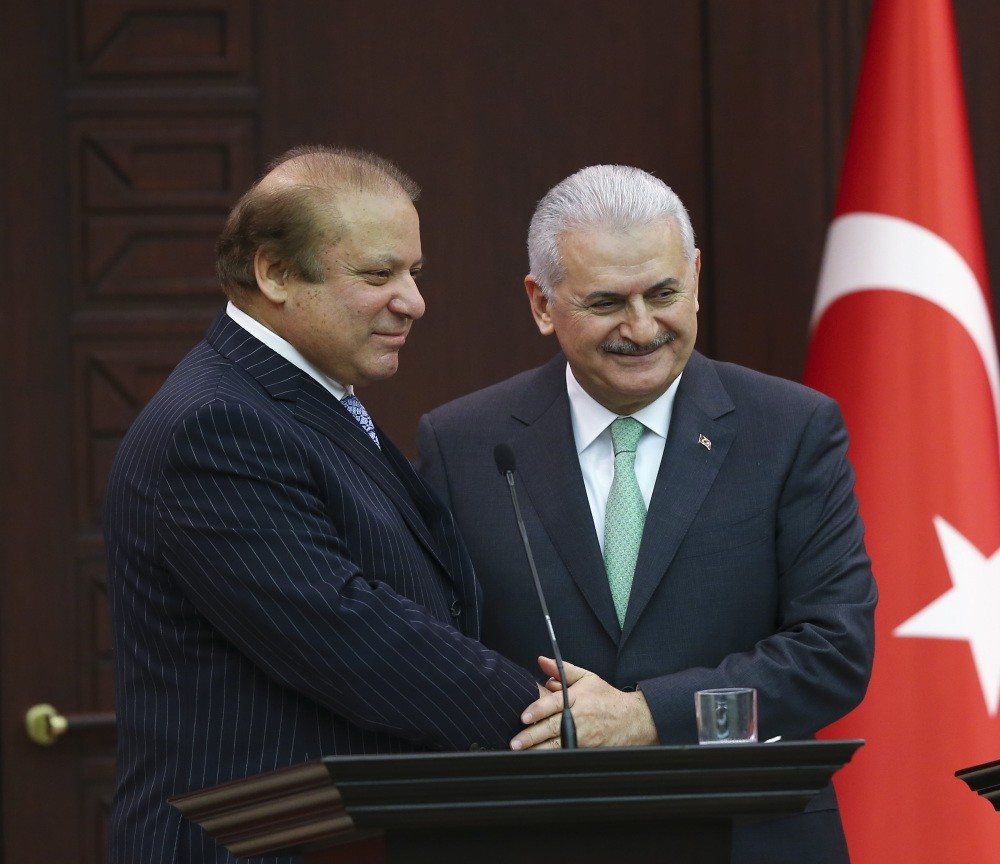 Pakistani Prime Minister Nawaz Sharif arrived in Turkey to co-chair the fifth session of the Pakistan-Turkey High-Level Strategic Cooperation Council meeting alongside Prime Minister Binali Yıldırım in the capital Ankara yesterday. As Yıldırım and his Pakistani counterpart praised Turkey and Pakistan's long-lasting exemplary relations during the joint press conference, Sharif affirmed his determination to combat the Gülenist Terror Group (FETÖ) network in Pakistan, stressing that "Turkey's enemies are also Pakistan's enemies." Prime Minister Sharif also met with President Recep Tayyip Erdoğan and paid a visit to the Turkish Parliament "to reaffirm Pakistan's unequivocal support and solidarity with the government and people of Turkey against the failed coup attempt in Turkey on July 15."

Speaking at Çankaya Palace Thursday during the joint press conference, Sharif reiterated Pakistan's solidarity with Turkey against the coup attempt. "The Turkish people made a great sacrifice by going out onto the streets and standing in front of tanks. Pakistan supports the struggle against FETÖ." The Pakistani Prime Minister described Turkey as his "second home" and stressed that "Turkey's enemies are Pakistan's enemies as well. We support Turkey's fight against terror."

Prime Minister Yıldırım praised Pakistan for displaying "a spirit of brotherhood and historical solidarity" immediately after the coup attempt. Beginning his remarks by welcoming his Pakistani counterpart to his "second home," Yıldırım said, "Pakistan is strategically an important country, due to its geographical position, young population and natural resources. It is also a key country in all developments in Asia. Despite the difficulties Pakistan is facing, we are honored by its progress in all areas." Yıldırım further stressed that FETÖ is a threat to Pakistan's security and public order. "Through the additional steps our brother-country Pakistan will take, FETÖ will not survive in Pakistan and will completely leave the country," he said.

Informing media members at the press conference that Erdoğan is set to travel Pakistan soon for a regional summit, Yıldırım stated that economic and trade relations, in addition to possible steps in energy, infrastructure and transportation, were addressed during the meeting with Sharif. He also announced that the free trade agreement between the two countries is close to being signed while Yıldırım stressed that enhancing trade relations is a necessity.

Turkey and Pakistan marked the 70th year of exemplary diplomatic relations, with both countries aiming to advance relations to strategic cooperation. The Pakistan-Turkey High Level Cooperation Council (HLSCC) was established during Erdoğan's visit to Pakistan in 2009 to act as a base for consultations at the highest political level between the two sides. The mechanism provides strategic focus and direction to the bilateral relationship and helps chart a vision for the future. Relations between Pakistan and Turkey have also witnessed notable growth and dynamism in recent years, ranging from enhanced economic ties to deepening defense collaboration, and growing educational and cultural links. The council meetings also resulted in six joint working groups in energy, finance, banking, transport and communications, culture and tourism and education fields, respectively.