Erdoğan calls for solidarity with TRNC, Azerbaijan during Pakistan trip 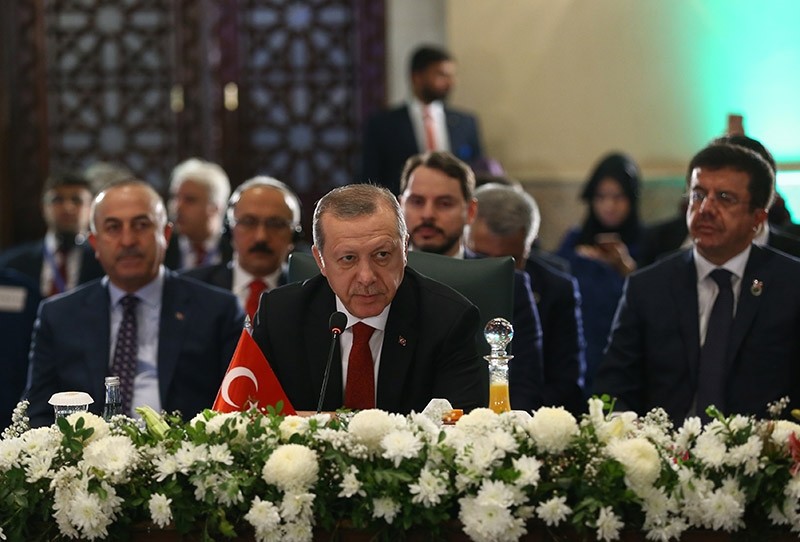 Turkish President Recep Tayyip Erdoğan has called for more cooperation, and asked to stand in solidarity with the Turkish Republic of Northern Cyprus (TRNC) and Azerbaijan on Wednesday in Pakistan's capital Islamabad during the speech he delivered at the 13th Economic Cooperation Organization (ECO) Summit.

The ECO is a Eurasian political and economic intergovernmental organization whose members include Turkey, Pakistan, Iran and a number of Central Asian countries.

Erdoğan said that strong cooperation is necessary to stop the ongoing bloodshed in Iraq, Syria, and Yemen, while also calling on the nations in the region not to fall into the trap of external powers and to sustain the regional stability by avoiding conflicts that have been instigated on the grounds of ethnic and sectarian differences.

Referring to the bilateral economic ties between ECO member states, the Turkish president said that the current trade volume is far behind the potential these nations have.

''In order to raise the trade volume between our nations, we need to improve the quality of air, land, sea transportation. As for Turkey, we are ready for a trade boost, which is also part of our 2023 vision,'' Erdoğan added.

Erdoğan noted that despite the ECO being an economical organization, politics continue to constitute the main framework of the organization.

In regards to the TRNC, which is officially recognized only by the Republic of Turkey, Erdoğan called on ECO member states to stand in solidarity against the international isolation imposed on the Turkish Cypriot entity.

''The Azerbaijani territory of Karabakh has been occupied for 20 years. The negotiations in order to settle the issue peacefully seem to have failed. The ECO, as well as the Organization of Islamic Cooperation (OIC) need to intervene and make necessary arrangements so that the Armenian invasion is condemned on a world stage,'' Erdoğan noted.

Erdoğan also said that the international mediation group -- the Minsk Group -- had failed to find a peaceful solution to the Karabakh conflict. The Minsk Group, created in 1992, leads the Organization for Security and Co-operation in Europe (OSCE)'s efforts to find a solution to the dispute between Azerbaijan and Armenia.

An Azerbaijani soldier was killed on Monday in a border clash, the country's Defense Ministry said. On Feb. 24, five soldiers were similarly killed.

Last week's incident nearly coincided with the 20th anniversary of the Khojaly Massacre of Feb. 25-26, 1992, in which Armenian forces killed 613 Azerbaijanis in Karabakh.

Clashes in the occupied Karabakh region, which pro-Armenian militia took over in 1993, are nothing new.

In April 2016, more than 270 military personnel lost their lives in the worst-ever breach of a 1994 treaty between the sides, according to the Azerbaijani Defense Ministry.

Armenia and Azerbaijan fought a six-year war over occupied Karabakh in the early 1980s until the 1994 cease-fire.

Three UN Security Council Resolutions (853, 874 and 884), and United Nations General Assembly Resolutions 19/13 and 57/298 refer to Karabakh as part of Azerbaijan. The Parliamentary Assembly of the Council of Europe refers to the region as being occupied by Armenian forces.

Turkey's president on Wednesday also urged the need for resolutions of political disputes between the members of ECO and called for joint efforts to tackle terrorism.

"We need to take matters into our own hands," he said.