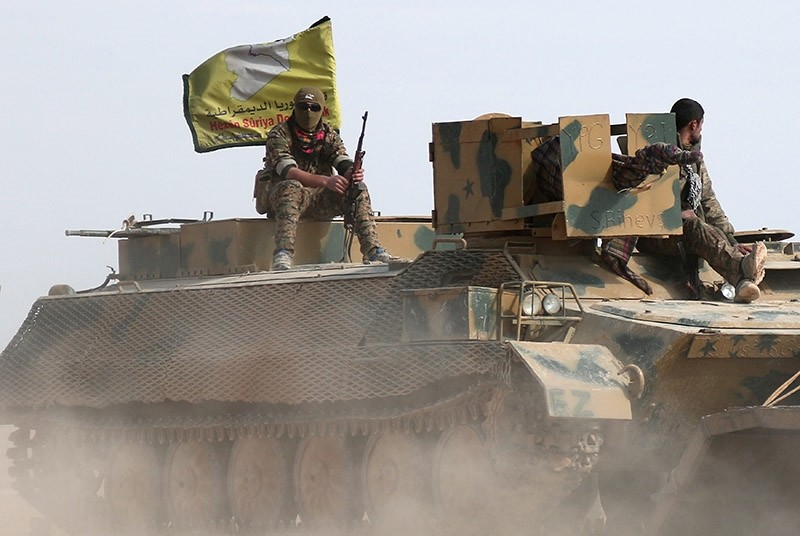 Syrian Democratic Forces (SDF) fighters sit on an armored vehicle in the north of Raqqa city, Syria, Feb. 05, 2017. The initials YPG are marked in on top of the shooting position in front of the vehicle. (Reuters Photo)
by Ragıp Soylu Mar 03, 2017 12:00 am

Council Co-Chair Ilham Ahmed, following her visit to the U.S. capital, told various news outlets last January that they were planning to open an office in Washington as soon as possible. The move is likely to infuriate Turkey because the SDF is largely led by the Turkey-based PKK terror group's armed Syrian wing the People's Protection Units (YPG), and tensions are running high between Ankara and Washington due to military developments near the city of Manbij and the upcoming Raqqa offensive against Daesh. The YPG is also commonly known for its political wing, the Democratic Union Party (PYD).

A State Department spokesperson told Daily Sabah that a Syrian Democratic Council (SDC) representative would be best to contact on their intention to open an office. Asked about whether the council needed permission from the U.S. administration, a State Department official said, "A number of groups and political parties from all over the world have opened offices in Washington without any particular status and without State Department involvement." The official spoke on condition of anonymity due to diplomatic protocols. The official said the department had nothing to do with the SDC's plans in Washington.

The person speculated that the idea to open an office came from Brett McGurk's office, the Special Presidential Envoy for the Global Coalition to Counter Daesh. Ankara has had combative relations with McGurk due to his sympathies toward the YPG. McGurk was an Obama administration appointee, but the Trump administration decided to keep him in his post, a signal sent to Ankara that the U.S.'s Syria policy was not likely to change. "This office idea has not been presented to the Trump White House yet," the person said.

Many previous reports indicated that the YPG had no motivation to go to Raqqa due to the city's ethnic composition and the likely high casualties during clashes. One Syrian source said Americans were trying to motivate the YPG by giving a green light to an SDC office because they want recognition.

SDC Co-Chair Ahmed refused to comment on this story. Various sources said it was not clear when exactly the office would open, especially considering the fluid situation on the ground.

"Right now, we're in the approach to isolation. Our Syrian Democratic Forces partners have not yet closed a siege around Raqqa as of yet. They're still moving in that direction, so we've got some time yet to fully examine all the options. Nothing's off the table," Lieutenant General Stephen Townsend, the commander of the anti-Daesh coalition said, responding to a question on whether Turkey will participate in the Raqqa operation on Wednesday.

Turkey has severely opposed the U.S. partnership with the YPG in Syria and is now pressing Washington to work with Turkish-backed forces to take Raqqa, instead of the SDF.