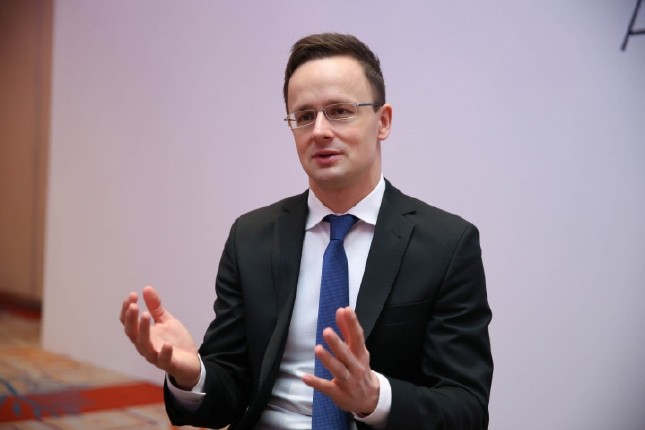 by Merve Aydoğan Mar 07, 2017 12:00 am
Hungarian Minister of Foreign Affairs and Trade Péter Szijjártó, speaking exclusively to Daily Sabah, described Germany's recent decision to ban Turkish ministers from speaking in public as a "double-standard." German authorities recently and controversially banned meetings organized by two Turkish ministers last week causing tension between the two countries and leading to strong criticism from politicians in government and the opposition in Turkey.

Minister Szijjártó criticized the European Union for its "hypocritical" approach toward Turkey as he further stressed that "a country [Germany] that values liberty of speech and liberty of thoughts, banning democratically elected leaders of other countries from speaking to their own citizens is to me a double standard."

German authorities in the southern town of Gaggenau controversially withdrew permission last week for an event where Justice Minister Bekir Bozdağ was to speak to Turkish citizens and deliver a speech about the upcoming referendum on April 16 regarding proposed constitutional amendments in Turkey, in an event organized by the Union of European Turkish Democrats (UETD). Although the statement released by the city of Gaggenau indicated that the event was canceled due to security-related concerns and the "limited capacity of the hall" where the event would have been held, Turkish politicians including opposition parties described the incident as an "anti-democratic practice." Commenting on the matter, Szijjártó said, "We have Hungarian citizens abroad as well and we visit them regularly and during elections also, thus I don't understand why it would be a problem since we [politicians] all do it..."

Continuing with his remarks by stressing that Hungary "absolutely rejects the European position" against Turkey, Minister Szijjártó reaffirmed the strong ties between Turkey and Hungary and described Turkey as a "close ally, not only in the framework of NATO but in general." He further criticized the controversial position the EU took following the vicious failed coup attempt on the night of July 15 last year as he said: "We absolutely reject the European approach, which usually puts criticism on Turkey. We don't like the approach, which cares more about the rights of those people who committed the coup than the coup itself. Therefore, our position is that a coup d'état is a serious thing and on such a serious thing you have to give a serious answer." While noting that the EU has been "hypocritical" on Turkey, Minister Szijjártó reminded people that the Gülenists that "the EU tries to embrace nearly killed a democratically elected president in this country [Turkey]." He further touched upon the Turkey-EU deal, which includes the acceleration of Turkey's membership bid and visa-free travel for Turks within the Schengen area, as well as the migration deal, and emphasized the necessity of the EU tightening its ties with Turkey.

"Due to global developments, regional challenges and Turkey becoming more competitive in the region while the EU becomes competitive, these three matters make it very evident that the EU's interests should be to work as closely with Turkey as possible. Unfortunately this is not happening and we [Hungary] are absolutely against criticizing Turkey on a regular basis for hypocritical elements," he added. The Hungarian minister also urged the EU to be more understanding with Turkey, especially on the matter of counterterrorism laws as he said, "Our position to Turkey is whatever we promised to give, we deliver." He also stressed that the "European Commission must not overplay its role."

Addressing bilateral relations, he said Turkey and Hungary agreed to upgrade their trade volume to $5 billion annually within a few years. "For that we have to put together an action plan regarding agriculture, water management, and nuclear energy," he added. "We [Turkey and Hungary] agreed to launch joint projects worth half a million euros for the first step in the field of research and development for the ICT sector, agriculture sector and industry 4.0. We also have good cooperation in the energy field, you put a lot of emphasis on nuclear energy and building a nuclear power plant… thus we have made an agreement that Turkish nuclear engineers can be partly trained and educated in Hungary at a given university as well as at the nuclear power plant itself," Minister Szijjártó noted.
Last Update: Mar 07, 2017 11:22 am
RELATED TOPICS