Ankara-Moscow look for common ground in Syria, despite differences on YPG 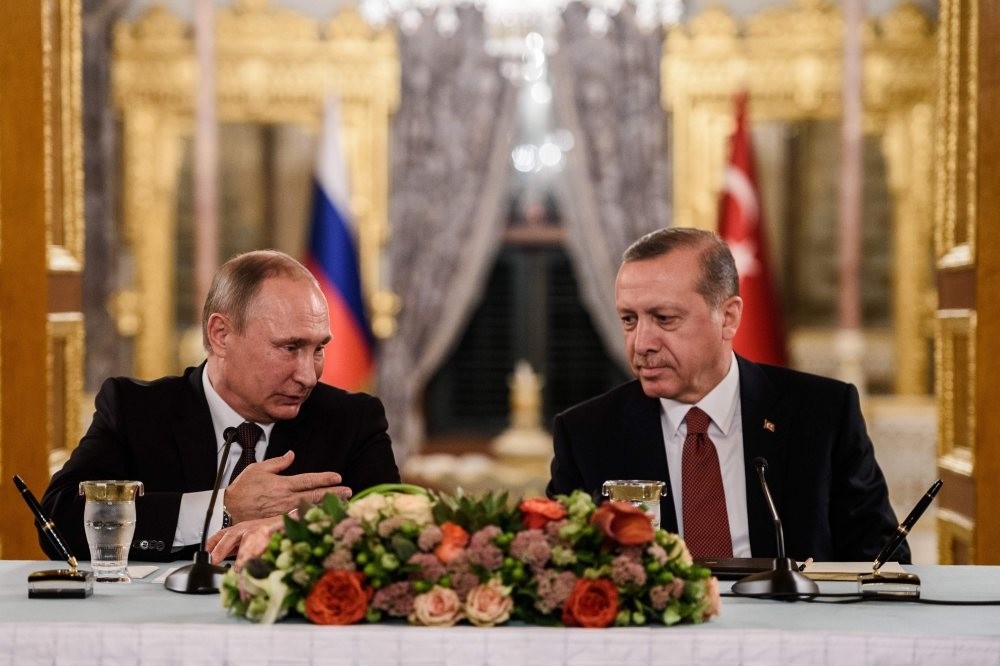 President Recep Tayyip Erdou011fan speaking to his Russian counterpart Vladimir Putin as they attend a press conference in Istanbul on Oct. 10, 2016.
by Mustafa Kırıkçıoğlu Mar 10, 2017 12:00 am

Turkey and Russia greatly enhanced their cooperation last year regarding Syria leading to a nation-wide cease-fire in the war-torn country and to the Astana talks. Now, they are seeking for a common ground in northern Syria regarding the PKK-linked YPG's presence in today's meeting

President Recep Tayyip Erdoğan is paying an official visit to Russia today and is expected to meet his Russian counterpart Vladimir Putin, as the two leaders have an intense regional agenda, including anti-terror operations in Syria and Iraq, as well as economic issues. Experts think that despite differing views, such as their stances on the presence of the PKK terrorist organization's offshoots in northern Syria, Ankara and Moscow have a strong collaboration and should be able to find a common ground on these issues.

During his visit in Moscow, Erdoğan will attend the sixth summit of the Turkish-Russian High-Level Cooperation Council (ÜDİK), which was initiated between the two countries for the first time in 2010. The visit was originally scheduled to be held in December 2015, but was later canceled by Putin after the jet-crisis between the two countries. Kremlin spokesperson Dmirty Peskov said yesterday that Syrian crisis is the main agenda of the meeting.

Military collaboration in the region to be on agenda

Speaking about the issue yesterday, presidential spokesperson İbrahim Kalın said along with the economic agenda, regional issues including Syria and Iraq are to be addressed in the meeting. "The political solution process in Syria is continuing under the auspices of the U.N. The trilateral mechanism between Turkey-Russia-Iran has been established to monitor any violations against the cease-fire. The fifth round of the Geneva talks will be held on March 25 as it is vital for the process to continue. I would like to emphasize that Astana and Geneva are two processes that complete each other," he said.

Meanwhile, earlier this week, Russian Foreign Minister Sergey Lavrov said the Syrian crisis will be discussed in detail during meeting on the eve of the third Astana talks, which will be organized in the Kazakh capital on March 14-15, adding that "Russia is ready to increase cooperation in Syria through bilateral and multilateral channels."

Fuad Safarov, a journalist for Sputnik, told Daily Sabah that Turkish cooperation with Russia in the Syrian crisis as a NATO member sends a positive signal to other countries. "NATO focuses on the tension with Russia instead of waging war against terror in Syria and other regions. However, unlike other NATO countries, Turkey continues its cooperation with Moscow. Russia recognizes these efforts and values to it," he said.

He also said the Astana talks are likely to be discussed during the meeting, as Russian experts have previously drawn attention to the benefits of the talks in terms of bringing together the conflicting sides.

The Erdoğan-Putin meeting coincides with the military preparations for the new U.S. government's plans for Syria, particularly for the Raqqa operation.

Turkish military Chief of Staff General Hulusi Akar met with his American and Russian counterparts Gen. Joseph Dunford and Gen. Valery Gerasimov in the southern Turkish city of Antalya on March 7. After the meeting, a statement released by the Turkish Armed Forces (TSK) said the generals discussed security issues mainly related to the developments in Syria and Iraq in the meeting.

Cooperation on Syria continue despite divergence on YPG

Safarov added that despite the divergences in their opinions concerning the presence of the PKK's Syrian offshoot the Democratic Union Party's (PYD), and its armed wing the People's Protection Units (YPG), in northern Syria, the two countries will continue their cooperation without focusing on this issue. "Both countries are making efforts to not focus on the issue as it could harm their productive progress in Syria," he said.

While Turkey sees the YPG presence in the western part of Operation Euphrates Shield as "breaching the red line," Russia avoids the issue and continues to cooperate with Turkey against Daesh without sidelining the YPG. The Turkish Foreign minister said yesterday that if Russia supports the YPG near the northern town of Manbij or other in places in Syria, it would be a problem for Turkey. "On the other hand, if they show efforts of steering clear of the YPG, we will support them," he said. "The most important criteria is the YPG. It is comparable to Daesh for us."

"We should not expect a complete change in the Russian policy concerning the Kurds. However, Moscow could make some compromises in its policy toward the PKK-linked groups, such as the YPG and the PYD in northern Syria," Maria Beat, a Russian freelance journalist in Istanbul, told Daily Sabah. Beat stressed that despite the two countries only having economic cooperation in the past, now it has become a multidimensional collaboration since they provide mutual military support against the Daesh terrorist organization. "The situation is unique for Russia as it militarily cooperates with a NATO member country while maintaining strained relations with the organization," she said.

The Turkish-Russian High-Level Cooperation Council (ÜDİK), where the relations between the two countries have been discussed to a great extent, is held once a year with the attendance of the two countries' presidents and their related ministers, and is hosted by Ankara and Moscow in sequence. There are three different structures within the body of the ÜDİK: The Joint Strategic Planning Group, the Joint Economic Commission and the Social Forum. The decisions are derived from these three structures throughout the year are added to the agenda for the ÜDİK meetings for evaluation and approval.

The organization was established during former Russian President Dmitry Medvedev's Ankara visit in 2010, and the first meeting was held the same day. After that, it was respectively held in Moscow, Istanbul, St. Petersburg and Ankara until 2015. So far, about 40 projects have been approved during these meetings, including strategic projects, such as the Akkuyu Nuclear Plant, Turkey's first nuclear plant planned to be built in the southern province of Mersin.

Despite the relations between the two countries suffered a major blow in Nov. 24, 2015, when a Russian Su-24 bomber breached Turkey's airspace and was downed by the Turkish Air Force near the Syrian border, the two countries have largely overcome the crisis and aim "to reach a better level than the pre-2015 period," as voiced by Turkish officials. Besides the recovery in bileteral relations, Moscow and Ankara have played a key role in stopping the bloodshed in the Syrian war by agreeing on the evacuation of Aleppo in late December of last year, which was described by Putin as "the biggest humanitarian operation in the world," and subsequently established a nationwide cease-fire in war-torn Syria.