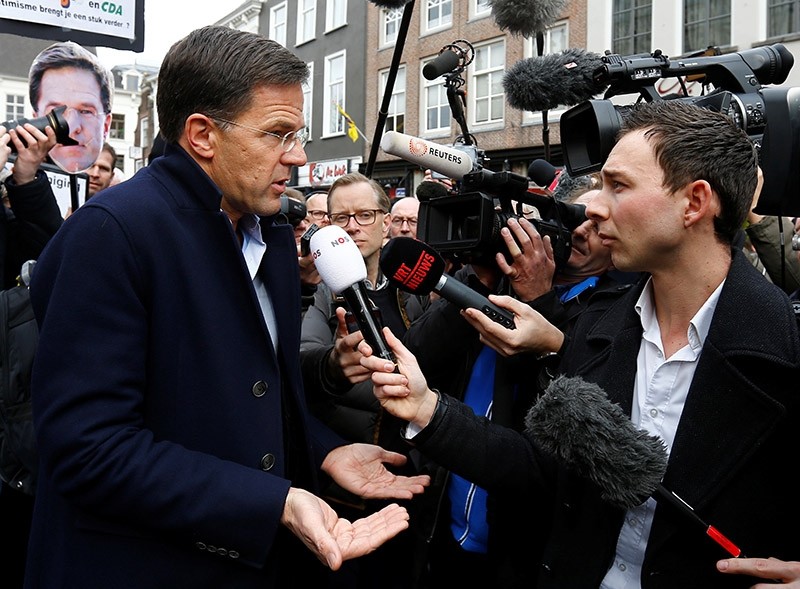 Dutch Prime Minister Mark Rutte of the VVD Liberal party speaks to the media as he campaigns for the 2017 Dutch election in Breda, Netherlands March 11, 2017. (Reuters Photo)
by Compiled from Wire Services Mar 12, 2017 12:00 am

The Dutch government weighed in on the row over a Turkish minister's planned visit to campaign for an upcoming referendum at home, calling her stop in Rotterdam Saturday "irresponsible."

In a statement released early Sunday, the government of Prime Minister Mark Rutte pointed out that Turkish Family Affairs Minister Fatma Betül Sayan Kaya had been warned ahead of time that her planned campaign stop at the Turkish consulate was "unwanted."

Nevertheless, the minister had gone ahead and travelled to the Netherlands, said the statement published by Dutch broadcaster NOS. She had been asked to leave the country after hours of negotiations outside the Turkish mission.

Rotterdam mayor Ahmed Aboutaleb told an early morning press conference that the Turkish minister had been declared an "unwanted foreigner."

Previously on Saturday, Rutte on Saturday denounced remarks by Turkish President Recep Tayyip Erdoğan likening the Dutch to Nazis as "crazy," adding it was "way out of line."

They were "crazy remarks," Rutte told reporters as he campaigned for re-election in Wednesday's polls in The Netherlands.

"I understand that they are angry but this is way out of line", he said in the town of Breda.

The Hague said Saturday it would refuse Turkish Foreign Minister Mevlüt Çavuşoğlu's plane permission to land ahead of a planned rally in Rotterdam.

Erdoğan reacted angrily by likening the ban to Nazism, saying "they are the vestiges of the Nazis, they are fascists". He added that the Dutch "do not know politics or international diplomacy."

Rutte said it had been a tough decision given Turkey was "a NATO ally", but he insisted: "I really think we made the right decision here."

Despite the angry words, Rutte said it was important to keep good relations with Turkey.

"We will do everything to keep the relations with Turkey as good as possible, as strong as possible," Rutte said.

He added it was not right "for Turkish ministers to campaign in the Netherlands among Dutch people —with potentially a Turkish passport, yes — but first of all Dutch people."

The Dutch move comes after Germany and other European nations saw efforts to block other such campaign events, which are aimed at gathering support for a Turkish referendum on a switch to presidential.

It was unclear whether the Turkish rally in Rotterdam would still take place.

It would come just four days ahead of high-stakes elections in the Netherlands which have been dominated by a polarizing debate over immigration and the role of Muslim citizens.

Dutch political leaders hit the campaign trail Saturday, criss-crossing the country to woo voters ahead of next week's elections now overshadowed by the bitter row with Turkey.