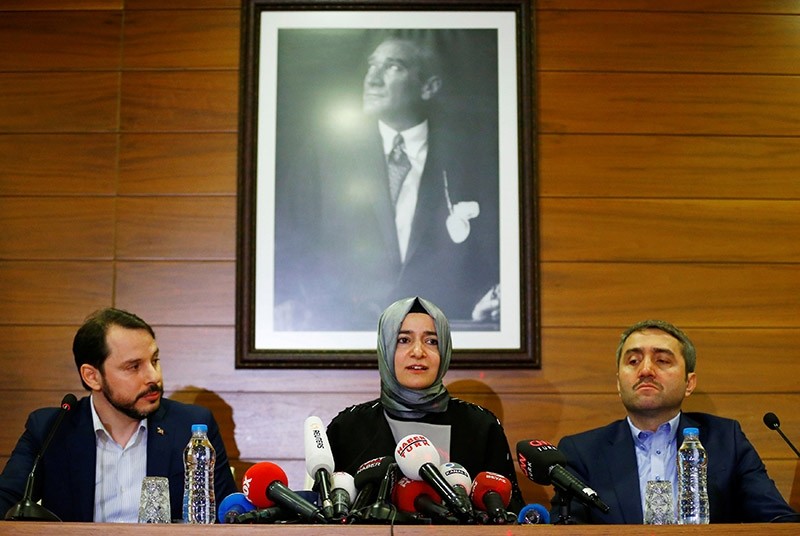 Turkey's minister of family and social policies has said she suffered "harsh and rude treatment" at the hands of Dutch authorities when she was blocked from entering the Turkish consulate in the Netherlands' Rotterdam city late Saturday night.

Speaking to reporters after her plane landed at Istanbul Atatürk Airport from Germany's Cologne-Bonn airport, Fatma Betül Sayan Kaya described how she was escorted to Germany by Dutch police after she tried to reach the Turkish consulate and meet Turks gathered there in Rotterdam.

Kaya said even the Turkish consul was not allowed to meet her outside the consulate.

"I went there to meet our electorates. I went to meet them at our consulate which is part of our homeland, and we do not need to get permission for that," she said.

She said she was taken to Germany via the Nijmegen border as "democratic and humanitarian values were trampled upon.

"We received an inhumane and unethical treatment," the minister said.

"We were treated harshly and rudely. The European attitude towards a female minister three days after the International Women's Day is a tragicomedy," she said.

All this happened as Europe repeatedly spoke about human rights and freedoms, Kaya added.

"We were not allowed to meet our basic needs. Freedoms of movement, expression, meeting were all held in abeyance," she said.

Accompanying Kaya at the airport was Energy Minister Berat Albayrak who said it was "a night of shame for the Netherlands".

He said it was "quite alarming" that most of his European colleagues avoided making a public statement to condemn the incident.

The family minister strongly condemned the treatment meted out to her by Dutch authorities and urged the international community to also condemn it.

At least seven people were wounded and 12 others were arrested during Saturday night's police action to disperse the crowd in the Dutch city, Rotterdam police official told Anadolu Agency on Sunday.

Meanwhile, civilians continue to gather outside the Dutch consulate in Istanbul in protest against the Dutch blockade of Turkish ministers.