Shadow of Srebrenica still hovers over the Netherlands, Erdoğan says 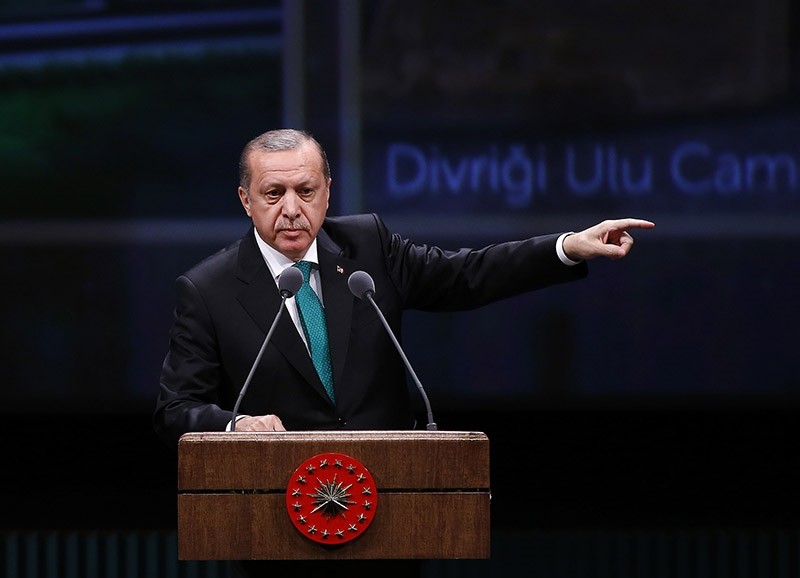 President Recep Tayyip Erdoğan yesterday slammed the Netherlands' undemocratic treatment of the Turkish ministerial convoy in the Dutch city of Rotterdam by reminding the country of its role in the Srebrenica genocide of Bosniaks, Muslim Bosnians, in 1995.

''The Netherlands did not surprise us, we were already aware of their low morality and level of civilization and the manners of the Dutch. We know it from the role they played in the Srebrenica genocide,'' the Turkish president said, referring to Dutch peacekeeper forces who allowed Serbian death squads to enter the so-called ''safe enclave,'' and round up the Bosniaks before proceeding to perform mass killings.

''Nobody should try to give us lessons on morality, especially not those who have blood on their hands,'' Erdoğan added.

The ongoing row between Turkey and the Netherlands escalated into a diplomatic crisis after Dutch authorities blocked the family minister's convoy from entering the Turkish Consulate in Rotterdam on Saturday, following the Dutch government's decision to deny landing permission to the plane carrying Turkish Foreign Minister Mevlüt Çavuşoğlu earlier that day.

Turkey will go to the European Court of Human Rights (ECtHR) over the Netherlands' treatment toward Fatma Betül Sayan Kaya, the minister of family and social policies, President Erdoğan also said on Monday evening during a televised interview.

"Two of our ministers will apply to the [ECtHR] over their treatment in the Netherlands," he said in an interview with A Haber TV news broadcaster.

Rotterdam local authorities on Saturday declared a state of emergency to disperse a peaceful crowd protesting the undemocratic treatment of Minister Kaya by the Dutch police. Many people, including journalists, were left injured after Rotterdam's mounted police used force on protesters and released K9 police dogs on the crowd to clear the street.

The president also harshly criticized German Chancellor Angela Merkel over Germany's "support of terror"saying, "We have sent her over 4,500 files regarding terrorists and not a single step has been taken [to extradite them] so far. Germany and Chancellor Merkel side with terror," Erdoğan said.

Ankara has long criticized Germany for being a safe haven for the recruitment, propaganda and funding activities of the PKK terrorist organization. According to the 2015 annual report of German domestic intelligence agency BfV, the far-left terrorist organization had more than 14,000 members and adherents in Germany.Although the PKK is banned in Germany, which is home to a large Kurdish community, the terrorist group has been carrying out major activities through various cultural associations. According to the BfV's annual report released in June last year, the PKK raised more than 13 million euros ($14.3 million) in Germany 2016. The group, which is listed as a terrorist organization by Turkey, the EU and U.S., is responsible for the deaths of more than 44,000 people in a decades-long campaign against the Turkish state and has recently intensified its terrorist attacks. Furthermore, Ankara also asked German authorities to take steps against members of the Gülenist Terror Group (FETÖ) residing in Germany.

During his speech yesterday, Erdoğan called on Turkish citizens in Germany and the Netherlands to refrain from voting for German Chancellor Merkel and Dutch Prime Minister Mark Rutte.

He added that an apology by the Dutch authorities would not suffice and that further sanctions will be applied by Turkey on the Dutch government, which he said has inflicted irreparable damage to Europe and the EU by committing "state terror."

"The EU is no longer the symbol of law, freedom or human rights. I am warning the entire world of the developments taking place in Europe," the president said, adding that the issue is not solely Turkey's matter but it is rather "the rise of fascism, which is a threat to all foreigners in Europe."

What happened in Srebrenica?

The role of the Dutch peacekeepers in Srebrenica has cast a long shadow over the Netherlands, with a cabinet resigning in 2002 after a report laid some of the blame for the atrocity on the government. In 2015, Dutch authorities recognized the role of their ''peacekeepers'' in the genocide of Bosniaks and agreed to pay compensation to the family members of the victims.

At least 100,000 were killed all over Bosnia and Herzegovina, more than 80 percent of whom were Bosniaks. The massacre, during which mass rape and killings took place, is the only genocide incident recognized by an international court. During the Srebrenica massacre in the country, infrastructure and buildings bearing cultural and religious symbols, such as mosques, libraries and monuments were also destroyed by Serb forces. The bodies of many killed during the mass murders are still missing as the Serb forces buried them in mass graves, arbitrarily.

A 400-strong, lightly armed Dutch U.N. force known as Dutchbat, which was in Srebrenica at the time, was no match for the more than 5,000 heavily armed and experienced Serbian troops surrounding the town. Despite the imbalance between the two, Dutch soldiers did not call for NATO airstrikes when the threat was apparent, believing the words of Serb commanders who promised safety for Bosniak refugees, refraining from re-arming Bosniak refugees who gave up their arms and laid down their own arms when Serbs took over the town. Thirty Dutch soldiers, also unarmed, were also taken captive to prevent NATO airstrikes.