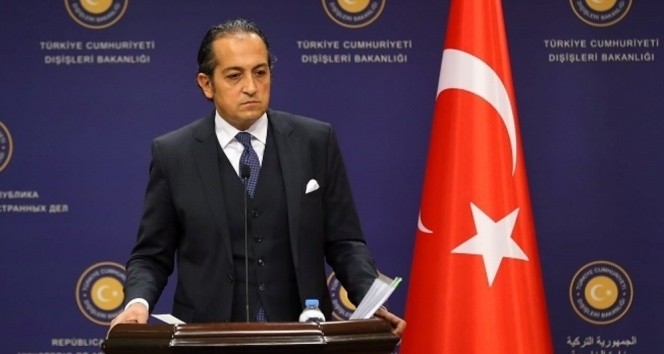 "We strongly condemn today's edition of the Swiss Blick newspaper, which includes insults against President [Recep Tayyip] Erdoğan and misleading remarks about the referendum on a constitutional amendment package in our country. We cannot accept these accusations and allegations," Müftüoğlu said Monday in response to a question over the Blick news report.

The daily, in an editorial published both in Turkish and German, urged Turks living in Switzerland to vote for 'No' in the April 16 referendum.

"Taking a biased and prejudicial attitude towards the referendum and the call for Turkish citizens in their country to vote clearly in a certain way and the derogatory remarks directed against Turkey's president who has the support of his country's people can have nothing to do with the freedom of press or journalism," he said.

The spokesman also underscored that Turkey expects Blick staff to respect the principles of unbiased publishing and comply with journalism ethics.

Switzerland has been criticized for turning a blind eye to PKK terrorism. Hundreds of PKK supporters organized a rally in January in front of the Palace of Nations, the United Nations headquarters, in the Swiss city of Geneva.

The PKK is officially listed as a terrorist organization by Turkey, the U.S., and the EU. The terrorist group resumed a 30-year armed campaign against the Turkish state in July 2015. Many supporters of the terrorist group who claim persecution in Turkey find asylum in European countries.