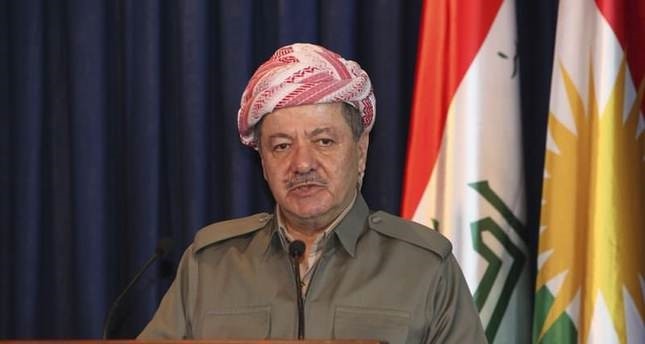 Iraqi Kurds have called on PKK terrorists to leave northern Iraq, particularly the Sinjar province, and expressed that the PKK has been causing instability in the region, including the invasion of more than 500 villages and restricting the government to provide services to the locals

Kurdistan Democratic Party (KDP) deputies, led by Kurdistan Regional Government (KRG) President Masoud Barzani urged the terrorist PKK on Wednesday to leave the KRG's territory, where they have invaded some 515 villages. In a statement, the KDP revealed that the PKK has invaded 304 villages in the city of Duhok, 177 in Irbil, and 34 in Suleimani, obstructing their residents from returning home. "The villages have turned into ruins as the government has not been able to provide basic services. The invasion of villages and restricting the government from providing services is clear interference into the KRG's sovereignty and a crime against the people of the region. The best solution for the PKK was to leave the KRG," the statement said.

It added that the PKK were in conflict with the people in the region and did not accept any other ideas or opinions, even from the Kurds, other than its own ideology.

The KRG authorities have been voicing their concern over the PKK's oppression of its people, and have urged the terrorist group to leave its territory.

In another statement from its political bureau, the KDP also said that the conflict, emerging due to the PKK and its affiliates were of a great concern. It also said that the PKK's Syrian offshoot, the Democratic Union Party (PYD), and its armed wing, the People's Protection Units (YPG), were denying people their democratic rights.

The KRG's Interior Ministry said in a statement on Tuesday that the PKK is planning to destabilize the Sinjar area: "The PKK is planning on systematically creating tension and chaos in the region [Sinjar area]. They continue to provoke the KRG forces deployed in the area to trigger clashes."

Meanwhile, KRG Prime Minister Nechirvan Barzani on Monday reiterated the KRG's call on the PKK to withdraw from Sinjar.

Speaking at an event, Barzani said, "The PKK must withdraw from Sinjar just like how the peshmerga returned from Kobani."

Stressing on the KRG's position regarding the issue, Barzani said the terrorist group's presence in Sinjar leads to instability in the region.

Even though the PKK maintains its presence in Sinjar, on the pretext of "protecting the Yazidi population," Yazidis themselves have also opposed the terrorist organization's presence.

Xalid Eli, an official from the Syrian-based political organization Kurdish National Council, on Sunday said the PKK's tyranny has surpassed that of Bashar Assad, adding that Kurdish politicians have been terrorized by the militant group.

"Our friends, put in jail by the PKK, were people who have been involved in politics for a long time. They are the people working for the freedom of the Kurdish people," Eli said.

"Assad sent the PKK to fight us, in order to crush Kurdish political parties. The regime has put pressure on Kurds in Rojava by cooperating with the PKK and the pressure still persists," he added.

Saying that the PKK is a "baton in the regime's hands," Xalid Eli added, "The PKK is not on the side of the Kurds. Even Bashar Assad or his father did not harm us as much as the PKK. The Assad regime could not have changed the demographics of Rojava as much as the PKK did."

Democratic Union Party (PYD) militants last week set fire to a Kurdistan KNC office in the town of Amuda in the province of Hasakah, northern Syria, Anadolu Agency (AA) reported on March 11. According to Syria Kurdistan Democratic Party (SKDP) Council Member Nuri Brimo, armed PYD militants raided the SKDP office in Amuda in the early hours of the morning before setting it on fire. In addition, nearly 60 SKDP members have recently been kidnapped by armed PYD militants in northern Syria.

Turkey, the U.S., EU and many other countries officially recognize the PKK as a terrorist organization.

The PYD, the PKK's affiliate in Syria, has been receiving arms support from the U.S., under the umbrella group Syrian Democratic Forces (SDF), which is predominantly led by the PYD's armed wing, the People's Protection Units (YPG).

The issue continues to remain an unsolved matter between Ankara and Washington.

While Turkey sees the PYD/YPG as a terror group, the U.S. sees them as the most effective partner in the fight against Daesh in Syria. Ankara has long argued that the arms support to the PYD is ultimately transferred to the PKK, and then used against Turkey.
RELATED TOPICS