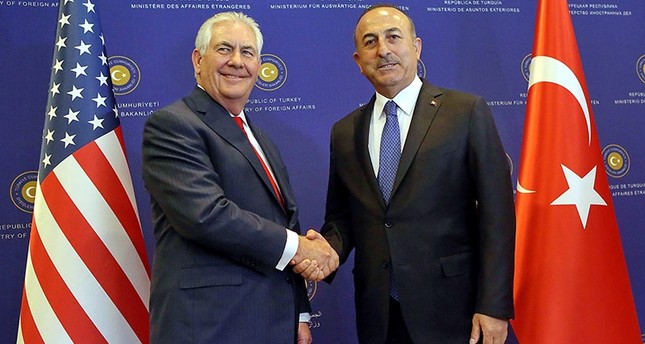 Speaking at a joint press conference with U.S. counterpart Secretary of State Rex Tillerson, Çavuşoğlu said that the U.S. administration and all relevant institutions recognize the fact that there is no difference between the PKK terrorists and the People's Protection Units (YPG).

"However, we unfortunately saw that the U.S. cooperates with the YPG" Çavuşoğlu said, adding that Turkey is worried about such support.

In response to a question about the arrest of Halkbank Deputy General Manager Mehmet Atilla, Çavuşoğlu said that it is a political decision and attorney Preet Bharara, who launched the investigation had close ties with supporters of the Gülenist Terror Group (FETÖ).

Regarding the call made by the U.S. Consulate in Istanbul to one of the masterminds of the coup, Çavuşoğlu said that Turkey would like to see concrete details behind the U.S. statement.

Share on Facebook Share on Twitter
Previous in Diplomacy Prime Minister Binali Yıldırım and other officials met U.S. Secretary... Next in Diplomacy Four Turkish citizens were injured after a fight broke out outside...
DAILY SABAH RECOMMENDS