Erdoğan: Nobody can massacre children under guise of fighting Daesh 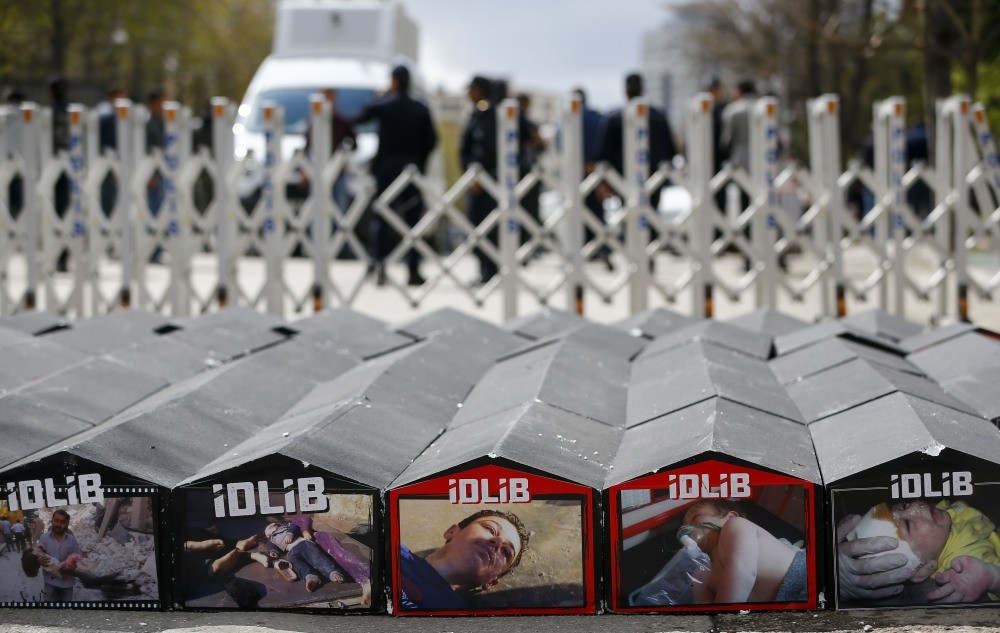 Mock-up coffin displayed during a protest on Friday in front of Iranian Embassy in Ankara against Assad regime's chemical attacks on Idlib (AA Photo)
by Daily Sabah Apr 08, 2017 12:00 am

President Erdoğan once again voiced Turkey's proposal for a safe zone in northern Syria in the wake of the Assad regime's chemical gas attack, saying that the regime's brutality is ‘too obvious to be ignored' under the guise of the anti-Daesh fight

The president said that the Assad regime's massacres "are way too obvious" to be covered and justified under the guise of anti-Daesh combat.

Touching upon the necessity of a safe zone which has been long mentioned by Turkey for the safety of civilians, Erdoğan said there must be "serious and concrete steps taken" to provide protection solely for those "oppressed Syrian civilians." He said that he hopes the U.S. strikes, as a result of the Idlib attack, "are a beginning to an active position [on the matter]."

Erdoğan said he will visit Syrian civilians wounded in the chemical attack who are being treated in Hatay hospitals, adding that, "In a world where children are being massacred, everyone has the right to feel safe and in peace. Everyone must reassess the position they are in."

The Foreign Ministry also released a statement, saying that it views the U.S. strike on the Assad air base "very positively" and pledged to support efforts to ensure accountability crimes committed by such actors.

"Such efforts will have Turkey's full support," the ministry said, adding that Turkey will continue to work with international actors to reach a political resolution in Syria.

Meanwhile, Foreign Minister Mevlüt Çavuşoğlu said that he has requested a meeting with his Russian counterpart Sergei Lavrov after the incident.

He noted that the U.S.-led anti-Daesh coalition was informed of the U.S. missile strike in Syria, while he highlighted that a transitional government without Assad must be established in Syria.

The main opposition Republican People's Party (CHP) leader has slammed the use of chemical weapons in Syria.

In remarks made during his meeting with the representatives of newspapers in Istanbul, Kemal Kılıçdaroğlu said: "The use of chemical weapons is a crime against humanity. It is the common duty of us all to determine the role of the Syrian regime on this issue."

The U.S. fired 59 Tomahawk missiles at a Sharyat military air base near Homs city that American officials believe had been used to carry out Tuesday's deadly chemical attack, according to the Pentagon.

The missiles were fired from two U.S. destroyers in the eastern Mediterranean. They struck the air base at approximately 3:45 a.m. local Syrian time Friday (00;45GMT).

The missile strike on an airbase in central Syria was "foolish and irresponsible," President Bashar al-Assad's office said.

"What America did is nothing but foolish and irresponsible behaviour, which only reveals its short-sightedness and political and military blindness to reality."

The Syrian military said that at least six people were killed and heavy damage was inflicted in the U.S. strike.

The Britain-based Syrian Observatory for Human Rights said Friday that the U.S. missile strike on a regime air base in response to this week's chemical attack destroyed "almost the entire" base.

"The base is no longer operational after the strikes," Rami Abdel-Rahman, the head of the Syrian Observatory for Human Rights said.

to take other action" in Syria.

The attack came after brutal chemical attack by the Assad regime, which has killed at least 100 civilians, including a great number of children. Before the attack, U.S. President Donald Trump said Assad "has crossed many lines" and that he would take action.

Meanwhile, Russian attacks continued today in Idlib after the chemical attacks, and at least 10 civilians were killed on Friday in an airstrike carried out in the town of Haish in northern Syria's Idlib countryside, according to local civil-defense sources.

Russia vowed on Friday to strengthen Syria's air defenses and suspended the agreement with the U.S. on military cooperation in Syria, following a U.S.missile strike on the regime-held Sharyat military air base.

Putin described the attack as "aggression against a sovereign country," according to comments his spokesman relayed to state media.

The missile strike is considered the first deliberate U.S. attack on Syrian state forces under U.S. President Donald Trump, who has previously said he would try to enhance cooperation with Russia in Syria.

In response, Russia has also decided to suspend an agreement with the U.S.on military cooperation in Syria.

The deal was designed to prevent possible military incidents between the two great powers.

Iran, another backer of the Assad regime, also condemned the U.S. strike.

"We condemn the missile attacks by U.S. warships on the Syrian air base and believe that such operations as retaliation of the still doubtful use of chemical weapons would only benefit the terrorists and further complicate the crisis in Syria and deteriorate perspectives for any political solutions," said Iran's Foreign Ministry.

"U.S. strikes show needed resolve against barbaric chemical attacks," tweeted Tusk, who represents the 28 EU member states, adding the bloc will work with the U.S. to "end brutality" in Syria.

Saudi Arabia hailed the U.S. missile attack and announced its "full support for the U.S. military operations against military targets in Syria," according to a statement published by the official Saudi Press Agency.

"We hail the courageous decision of U.S. President Donald Trump, which represents a response to the crimes of this [Assad] regime against his people in light of the failure of the international community to stop him," the news agency quoted a Saudi Foreign Ministry source as saying.Israeli Prime Minister Benjamin Netanyahu also praised Friday's U.S. missile strike on Syria's Shayrat Air Base. "In words and actions, President Trump sent a strong and clear response: The use of chemical weapons is unacceptable," Netanyahu said in a statement.
RELATED TOPICS