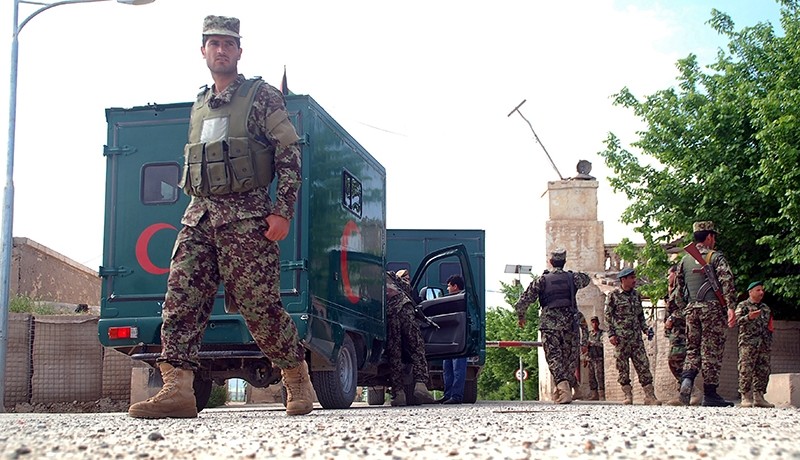 Afghan soldiers stand guard as military ambulances enter a military base a day after it was targeted by the militants in Balkh province, Afghanistan, 22 April 2017 (EPA Photo)
by Anadolu Agency Apr 22, 2017 12:00 am

The Foreign Ministry on Saturday condemned Friday's terror attack on the regional headquarters of an army base in northern Afghanistan that claimed the lives of dozens of soldiers and injured several others.

"We have learned with sorrow that a terror attack has taken place at the 209 corps headquarters of the Afghan National Army in Mazar-e Sharif city of Afghanistan," the ministry said in a statement.

"We strongly condemn this heinous terror attack. We wish Allah's mercy upon members of the Afghan National Army who lost their lives and wish speedy recovery to the wounded, and convey our condolences to the brotherly Afghan people and the government," it said, adding Turkey would continue to remain in solidarity with Afghanistan in its fight against terrorism.

There had been over 100 casualties among Afghan soldiers in the Taliban's attack on an army corps headquarters in northern Balkh province on Friday, according to the Afghan Ministry of Defense on Saturday.

While the Afghan military did not give an exact figure of the dead and injured, the Balkh Provincial Council in its statement said over 100 soldiers had been killed and more than 60 others were wounded in the incident.

The attack in the provincial capital Mazar-e-Sharif city is being billed as one of the deadliest ever assault on the Afghan army by Taliban militants.

A group of Taliban militants had stormed the army's 209-Shaheen Corps in the province at a time when soldiers were either having lunch or saying their Friday prayers in a mosque inside the heavily-guarded compound. The hours-long clash ended late in the evening, leaving dead bodies all over the mosque and the dining hall at the base.