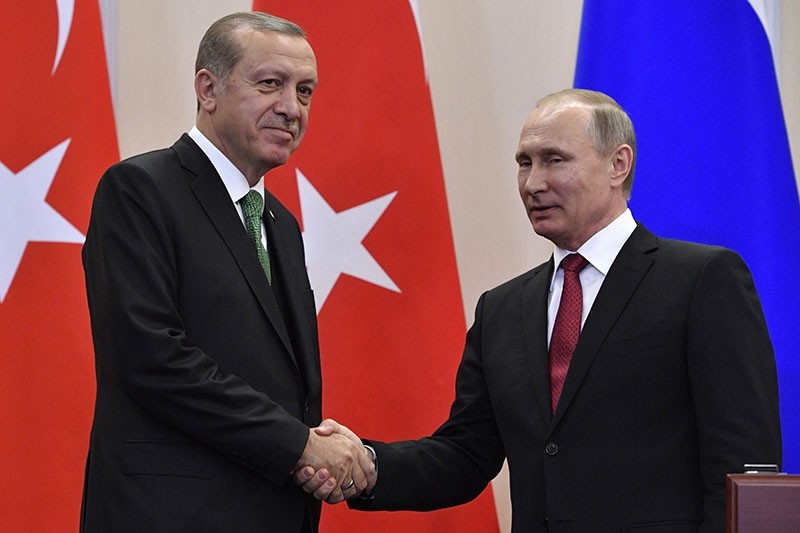 Russian President Vladimir Putin (R) shakes hands with his Turkish counterpart Recep Tayyip Erdou011fan after a joint press conference following their meeting at the Bocharov Ruchei state residence in Sochi on May 3, 2017. (AFP Photo)
by Daily Sabah May 03, 2017 12:00 am

Relations between Turkey and Russia have been fully restored, President Vladimir Putin said in a meeting with President Recep Tayyip Erdoğan in Sochi Wednesday.

Holding talks at the Russian president's residence in the Black Sea resort town of Sochi, the two leaders discussed the latest developments on bilatereal relations, particularly the Syrian crisis.

During a press conference after meeting, Erdoğan said the leaders agreed on establishing a "de-escalation" zone in Syria.

"I have always suggested the establishment of a no-fly zone. Now, there is a de-escalation zone in Idlib. People fled from Aleppo now to try to survive there. I hope this de-escalation zone will be maintained. We will discuss it with Mr. President [Putin]," he said.

"If there is a de-escalation zone, then planes will not fly there on condition that no military activity emanates from these zones. Yesterday, we discussed the issue with Trump in a telephone call. As I understand the U.S. administration also supports these ideas," Putin added on his part.

The two leader also agreed that "those responsible for the recent chemical attack in Syria must be punished."

Erdoğan went on to say that eliminating terrorist groups it the responsibility of both countries. He added that Turkey will take all necessary measures to prevent the establishment of "a hostile settlement" that threatens Turkey's border security.

"There is effective cooperation with Russia on Syria. Our main aim is to stop the bloodshed in Syria as soon as possible and reach a political solution while protecting the territorial integrity of the country," Erdoğan said.

"We cannot stay silent on baby killings and the massacre of people in hospitals any longer," he said. "We pay the utmost respect to fortify the cease-fire that was agreed on Astana talks."

Putin told Erdoğan that bilateral relations are proceeding as planned and that it is beneficial for both leaders to sit down and discuss important international issues, including the Syrian crisis.

Putin welcomed the Turkish delegation in Sochi and thanked President Erdoğan for accepting his invitation and coming to Sochi. He emphasized that bilateral relations are developing "as planned."

"Our mutual work indicates that Russian-Turkish relations have a special status and have been fully restored," Putin said.

The Russian leader also congratulated Erdoğan once again for the constitutional reform referendum win and said that he believes the improvement of the political situation in Turkey will enhance bilateral relations.

Turkish voters in the April 16 referendum were in favor of changes that envisage shifting from a parliamentary system to a presidential system. The changes will go into effect after the election in 2019.

"I am glad that we have a chance to meet and discuss key issues, including the Syrian crisis," Putin said, adding that meeting traffic shows that Russian-Turkish relations are of a special character and are being restored to a full format.

Erdoğan began by thanking Putin for his invitation and said that the meeting will be a good opportunity for the two leaders to discuss in detail both aspects of bilateral cooperation and regional issues.

"We are both countries that bear great responsibilities. I believe that the step taken by our two countries in the meeting will change the fate of the whole region," he said.

Relations between the two countries suffered a major blow on Nov. 24, 2015, when a Russian Su-24 bomber breached Turkey's airspace and was downed by the Turkish Air Forces near the Syrian border.

However, ties have been getting better since Erdoğan's visit to Russia in August last year. Turkey voiced regret over the unfortunate incident and the government has been taking steps to ease the tensions between the two neighbors.

Besides the recovery in economic relations, Moscow and Ankara have played a key role in stopping the bloodshed in the Syrian war by agreeing on the evacuation of Aleppo in late December of last year, which was described by Putin as "the biggest humanitarian operation in the world," and subsequently established a nationwide cease-fire in war-torn Syria. Along with Iran, the two countries also took the initiative to bring together the Assad regime and the Syrian opposition in Astana to sustain a cease-fire agreement and to negotiate for a political transition in the country.