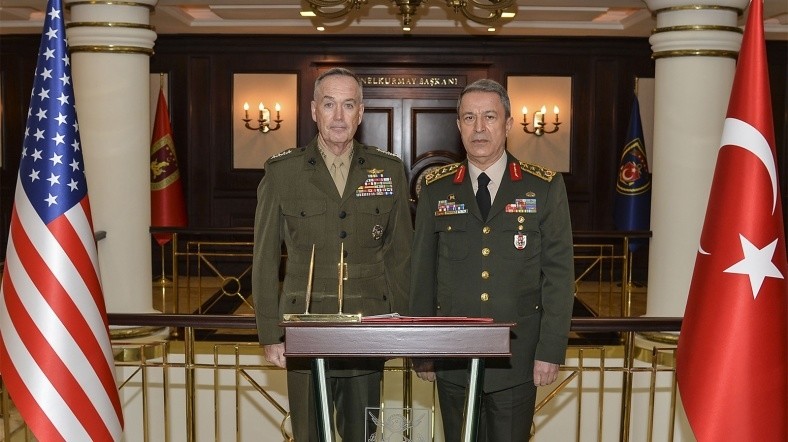 A spokesman for Gen. Dunford acknowledged that the meeting occurred. "They met yesterday and discussed issues of mutual concern as well as the current security situation in the Middle East, including the campaign to defeat [Daesh]," Navy Captain Greg Hicks said in an email.

The delegation's main aim is to convince U.S. officials not to partner with the People's Protection Units (YPG) in the upcoming Raqqa offensive due to its extensive ties with the PKK, a terror group designated by Turkey and the U.S.

Several media reports suggested that due to its military capabilities and technical advantages, the U.S. Central Command and Pentagon are in favor of YPG forces over the alternative liberation plan proposed by Turkey.

Turkish officials say they are concerned about the YPG's expansion from the north to the south in areas of Arab-majority. Turkish officials believe the YPG's presence in Raqqa would further legitimize their claims over Arab lands, and the PKK's role in the fight against Daesh.

Turkish Justice Minister Bekir Bozdağ is to join the Turkish delegation on Monday. Bozdağ told Turkish media on Saturday that he was scheduled to meet U.S. Attorney General Jeff Sessions on Monday to discuss the extradition dossier of Fethullah Gülen, a Pennslyvania-based radical cleric who has been accused of leading a terror group that coordinated an attempted coup in Turkey.

The delegation is expected to leave the town on Tuesday.
RELATED TOPICS