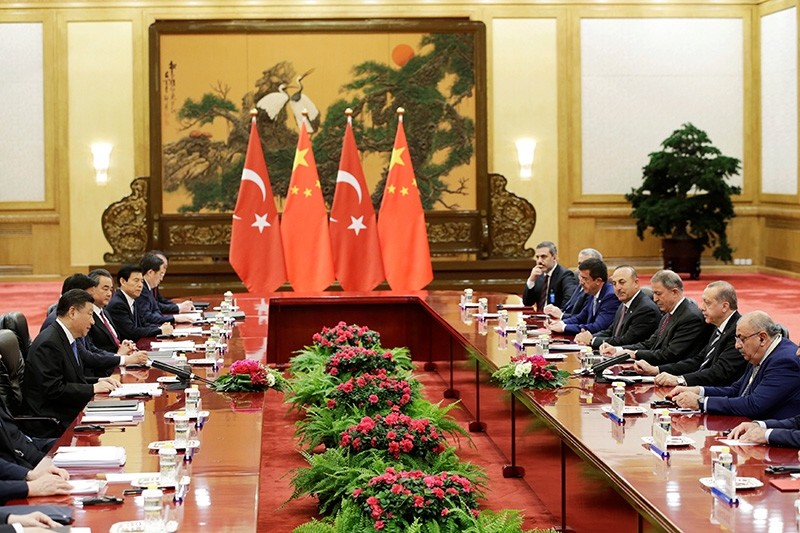 Turkish President Recep Tayyip Erdou011fan meets Chinese President Xi Jinping ahead of the Belt and Road Forum in Beijing, China May 13, 2017. (Reuters Photo)
by Daily Sabah May 13, 2017 12:00 am

President Recep Tayyip Erdoğan met with his Chinese counterpart Xi Jinping and leaders from different countries in Beijing, before the One Belt One Road (OBOR) international summit which will be held between May 14-15.

Upon his arrival at the Great Hall of the People for his meeting with Xi, Erdoğan was greeted with an official ceremony. The two leaders held a 45-minute-long meeting attended by the delegations of both countries.

Earlier in the day, Erdoğan first received Greek Prime Minister Alexis Tsipras, and the meeting between the two leaders lasted for around an hour. Erdoğan expressed Turkey's discontent with Greece's refusal to extradite eight putschist soldiers, who fled the country after the failed July 15 coup attempt. The president said that it is not right that they remain in Greece, and asked Tsipras to take necessary steps for their extradition.

Hungarian Prime Minister Viktor Orban was another leader received by Erdoğan, and the meeting lasted 40 minutes.

The president is expected to meet other leaders on Saturday and in the upcoming days of the summit.