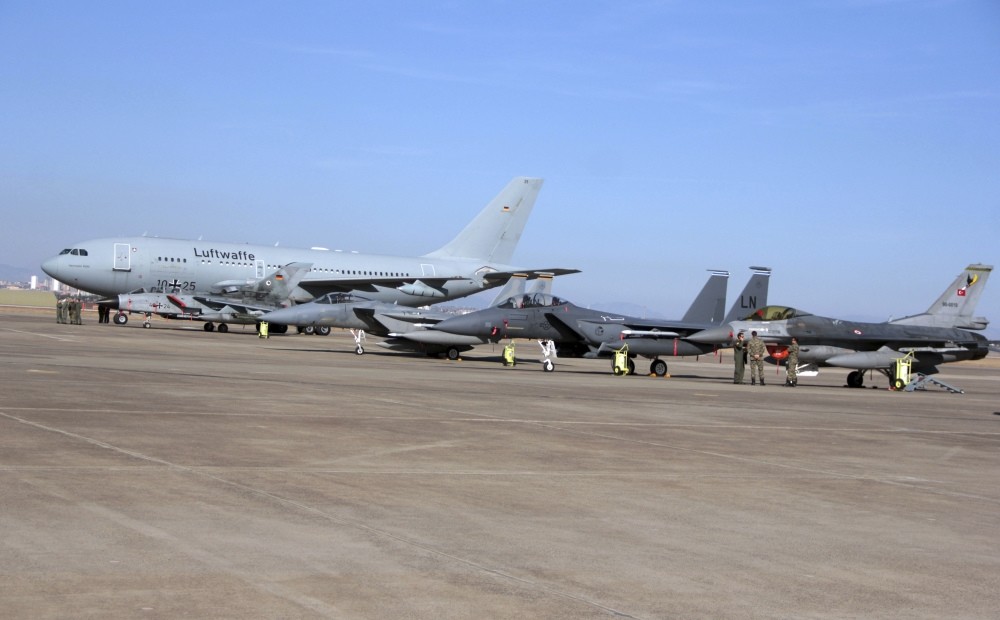 The German government hinted on Monday at the possibility of moving the personnel to Jordan after lawmakers were denied for a visit the Incirlik Air Base. However, experts wary on Berlin's possible move, saying that it now would not be rational

The German government lashed out at Ankara on Monday for preventing a parliamentary defense committee from visiting German troops currently stationed at the İncirlik Air Base, hinting at the possibility of moving the personnel to Jordan. However, the possibility of such a move remains questionable. Another crisis in already sour Turkish-German relations surfaced at the beginning of the week after it was confirmed that German lawmakers were denied a visit to the İncirlik Air Base. Diplomatic sources told Daily Sabah that the visit from the lawmakers was "considered inappropriate for the time being."

Daily Sabah reached out to the German government as well. Responding to a question of whether Berlin has already been in contact with the Jordanian government regarding the issue, the German Foreign Ministry pointed to a statement by the spokesperson for the German Defense Ministry, Jens Flosdorff.

Flosdorff said in a press conference on Monday that Berlin has already started to look for other options to replace the İncirlik Air Base by the end of 2017.

Stressing the fact that Jordan, the Greek Cypriot and Kuwait are the leading alternatives for Germany, Flosdorff said that Jordan is the most affordable option for the German government.

"Jordan cannot be compared to Turkey in this regard. Jordan is a fragile country in terms of security," Bora Bayraktar, an academic, at the International Relations Department of Istanbul Kültür University, that focuses on developments in the Middle East and North Africa region, said.

Bayraktar contended that Jordan cannot be an option for Germany, saying it was "irrational and unrealistic."

German Defense expert Markus Kaim, speaking to DW, expressed the same ideas. Despite confirming that moving troops to Jordan is technically possible, Kaim said that it was not the time for harsh reactions and strict attitudes.

"I do not think it is necessary to go that far," Kaim said, adding that it would deal a heavy blow to Turkish-German relations.

Germany has about 250 soldiers stationed at the base in southern Turkey, along with six Tornado reconnaissance jets, 180 to 200 containers and a refueling plane, all of which are used in the U.S.-led air campaign against Daesh militants in Iraq and Syria.

However, German jets do not actively participate in the bombardment of Daesh elements. The limited role of the German military at the air base leads to the question of whether the absence of the German jets would harm the anti-Daesh fight.

''The Tornado ECR is not a crucial factor for Turkey's defense. In other words, its absence will not have a negative impact on Turkey's air defense or operations against Daesh," Mevlütoğlu said.

The German government will have to deal with another obstacle if it decides to pull the troops out of İncirlik and transfer them to Jordan.

The German Defense Ministry spokesman, Flosdorff, said that it would take months rather than weeks to complete the whole transfer process.

"Even if you cannot dock the same infrastructure as in İncirlik, we would surely need more than a few weeks, rather a few months," he said.

Meanwhile, Bayraktar drew attention to the cost of such a move.

Stressing that moving all personnel and jets as well as other equipment to Jordan or Kuwait would be costly, the academic said, "It would be five or six times more costly than flying from the İncirlik Air Base. Germany cannot afford it."

German media outlets claim that the reason for the incident is related to the Gülenist Terror Group's (FETÖ) NATO military officers in Germany, who were granted asylum recently.

The Turkish officials seeking asylum are believed to be former officers who conducted NATO missions abroad and have links to Germany where they were previously assigned by the Turkish military.

Germany has been reportedly providing shelter to hundreds of fugitive diplomats and soldiers with suspected links to FETÖ who are accused of being involved in the July 15 coup attempt in Turkey.

Even though Ankara has repeatedly requested the extradition of FETÖ and PKK members taking shelter in Germany, the German government has so far failed to deliver a credible attitude of cooperation.