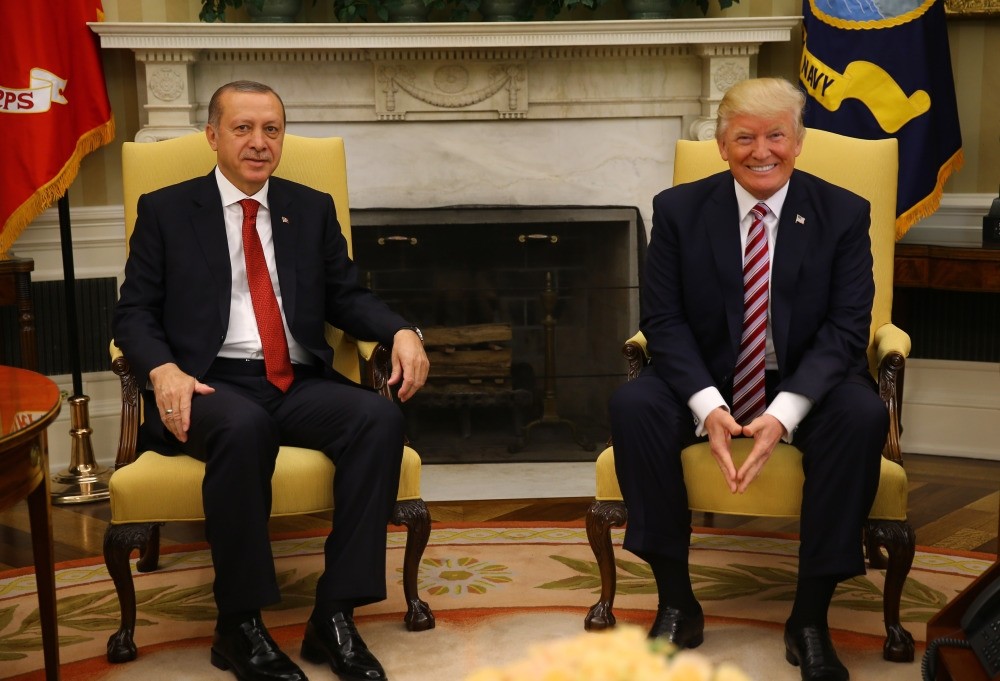 After his meeting with U.S. counterpart Donald Trump, President Erdoğan said that the relations between NATO allies is strong enough to survive temporary complications, such as different views on the YPG. He also said that Turkey won't allow the establishment of PKK a terror corridor near its southern borders

President Recep Tayyip Erdoğan, speaking to journalists at Turkey's embassy in Washington D.C. after his much-anticipated meeting with U.S. President Donald Trump, said there were definitely temporary complications in bilateral relations, the two NATO allies and strategic partners were determined to further strengthen ties in the near future. Erdoğan said he had the opportunity to discuss the PKK's Syrian affiliate People's Protection Units (YPG), the Gülenist Terror Group (FETÖ) and all issues affecting ties during his meetings with Trump.

Erdoğan told reporters that it was important for him to hear Trump's remarks pointing to his determination to fully cooperate with Turkey. When asked about Trump as a person, Erdoğan said: "As you know, Trump does not have a background in diplomacy. He is a businessman, and consequently seems like a practical person. He had a determined stance. He is a straightforward person who says what he thinks."

"I invited him and his family to Turkey. He said he would be glad to come, but, of course, there is no definite date yet."

When asked about Trump's attitude toward FETÖ, the group that carried out last year's deadly coup attempt on July 15, Erdoğan said: "Trump seems different from [Former President Barack] Obama. It is obvious that he has certain question marks about them. We agreed to keep in touch through a secure line, as well as allowing officials from both sides to discuss the FETÖ issue, in the future."

There were also discussions on Reza Zarrab and Halk Bank Deputy General Manager Hakan Atilla, Erdoğan said. Zarrab, a Turkish-Iranian gold trader, and Atilla are under arrest in the U.S. accused of conspiring to conduct illegal transactions through U.S. banks on behalf of Iran's government, violating U.S. sanctions, charges they deny. Erdoğan said Americans highlighted the fact that the judicial process was continuing, while he added that the Turkish foreign and justice ministers would be following the matter closely. The U.S. side raised the issue of American pastor Andrew Brunson, who is under arrest in İzmir on charges linked to FETÖ, Erdoğan said. "We told them the trial was continuing."

Erdoğan also said he had asked from the U.S. administration to order the FBI to establish a special investigation committee to analyze FETÖ activities. FETÖ leader Fetullah Gülen continues to reside in a compound located in Pennsylvania, while his charter school network across the country receives a significant amount of federal grants, believed to be used to finance its many subversive activities. When asked about the U.S. side's response, Erdoğan said: "They took note."

"What we are telling them is this: We cannot be a party to such a policy. We cannot support you. We find cooperation with a terrorist group to free Raqqa wrong," Erdoğan said.

"We openly told them that any attack by the YPG on Turkey will immediately trigger a response as per Turkey's rules of engagement and no one will be consulted prior to our action."

Turkey's counterterrorism efforts in the Syrian cities of Jarablus, al-Rai and al-Bab against Daesh demonstrated its effectiveness, argued Erdoğan. "We told them to ignore terrorist groups and join us to combat terrorism. Unfortunately, they failed to agree."

Erdoğan cited the sensitive ethnic composition of northern Syria, where the YPG's failure to vacate Manbij after pushing out Daesh was creating tension. The YPG is accused of carrying out ethnic cleansing of Arabs and extrajudicial murders of opponents across the region. When the YPG pushed out Daesh from Manbij, Turkey was told by Americans that the terrorist militants would soon vacate the Arab-majority city. "They [YPG] said they had withdrawn from Mabij, but no such thing happened. Who will move in when Daesh is pushed out of Raqqa? If you allow the Kurds in, you will trigger ethnic clashes between them and Arabs. I hope that the entire operation will end in an agreeable way."

"I believe we will eventually knock on our doors about Syria. Raqqa is now under siege. We will all see what happens. No matter what, Turkey will have presence in Syria and Iraq. Turkey cannot be kept out of any future resolution on the region's future. The NATO summit is coming up at the end of the month. Terrorism is on the agenda. These issues will also be raised there."

TURKEY WILL NOT ALLOW A PKK CORRIDOR

Since the beginning of the Syrian civil war, the PKK's Syrian wing, the YPG, has been on the offensive to create a contiguous corridor in the north from the borders of Iraq to Turkey. The YPG has established an enclave in Afrin in the northwest and another in the east consisting of the Afrin, Jazira and Kobani regions. Turkey's Operation Euphrates Shield pushed out Daesh from a huge track of land in northern Syria while preventing the YPG from connecting the two enclaves.

The U.S. continued to assure Turkey that the weapons given to the YPG will not be used against Turkey, said Erdoğan. "However, we all saw what happened in Afghanistan and Iraq. We would not want the repeat of such negative developments."

Erdoğan said Turkey will do its utmost to fight terrorist groups both within the country and abroad. "We will never allow the creation of a corridor. If any threat arises from that region, we will immediately take action."

If the assurances were proven false, Turkey will take the necessary steps to establish security, Erdoğan said. "However, it would not be right to comment on what kind of steps we may take as yet."

When asked about President Vladimir Putin's comment that Russia would continue to work with Kurds in northern Syria but will not give them weapons, Erdoğan said: "The matter is not working with Kurds or not. What's important is not to cooperate with terrorist groups. We tell our counterparts that they are giving these terrorists arms. We provide proof, show them the photos of missiles. They still deny it. And we will continue to present them with evidence."