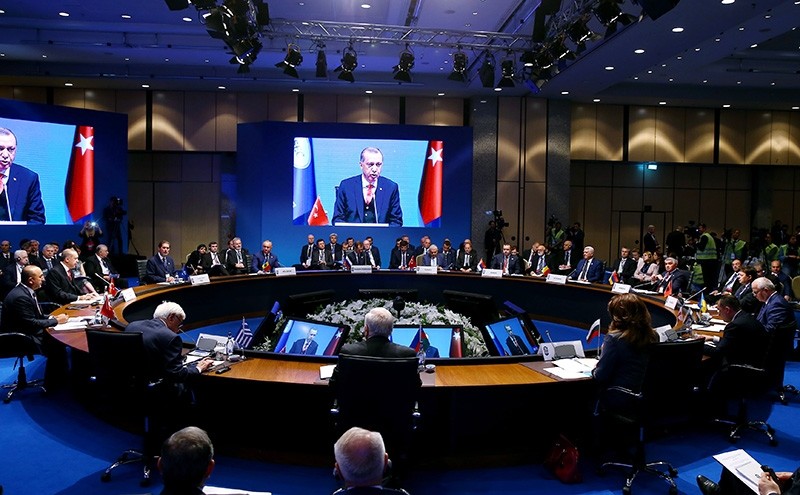 President Recep Tayyip Erdou011fan addresses delegation leaders during the opening session of BSEC Summit in Istanbul, May 22, 2017. (IHA Photo)
by Daily Sabah with AA May 22, 2017 12:00 am

Leaders from 12 member countries of the Organization of the Black Sea Economic Cooperation (BSEC) gathered in Istanbul Monday to discuss regional problems and to seek ways of enhancing economic cooperation.

Speaking during the opening session at the Lütfi Kirdar International Convention and Exhibition Center, President Recep Tayyip Erdoğan said that peace, stability and the welfare of the Black Sea region should be the common goals of all member countries.

Urging collaboration, Erdoğan continued, "I think we should move further to make this organization an effective tool to settle these problems. For this, we have to carry out our efforts with a focus on our common values, not differences, without entering into fruitless political discussions."

The president said the most important accomplishment of the organization was in bringing people and countries of the region together to meet their most pressing challenges.

"As member states, we may have different languages, cultures, political stances or economic levels. But at the end of the day, we have a common denominator that is the Black Sea, which brings us all together…," he said.

"The workers, who are working at the ports of Odessa, Novorossiysk, Varna, Constanta, Batumi, have common problems which are almost the same as those in Samsun, Trabzon and Zonguldak ports in Turkey," he said.

Erdoğan called on all member countries to follow a shared objective of rendering the region as a geography of peace, stability and welfare.

"It is up to us, the member states, to make efforts to reinforce our cooperation under this umbrella. Here in Anatolia, we have a saying: a neighbor needs even the ash of another neighbor," he said.

He said the current trade and investment volume among member states had not met its potential yet.

"We need to work more on projects that will make a difference in the daily lives of our people such as The Black Sea Ring Highway project -- Turkey completed its part in that project 10 years ago," he said.

"If other countries complete similar projects then we will have an established transportation network that can bring our people together around the Black Sea," he added.

The president also spoke about steps taken by Turkey to remove visa barriers in recent years, and urged for more measures to promote visa-free travel.

In his remarks at the day-long ceremony, Prime Minister Binali Yıldırım also called for further cooperation among member states of the organization.

Yıldırım focused on the importance of fostering economic cooperation and commercial ties and bringing the people of the region closer.

"The population of the Black Sea basin is 350 million. The region is getting stronger, its economy is growing," he said.

"The total gross domestic product of member states has reached $2.7 trillion today while it was $658 billion in 1992."

About the tourism potential, Yıldırım said visa-free facility with some member countries and an improved infrastructure had played an important role in the development of the region.

He said the number of Turkish tourists who visited member states was 3.5 million last year while 10.5 million tourists came to Turkey from these countries.

"There might be political problems among our countries from time to time. These are temporary problems that we should not get stuck in. Close cooperation should continue," he added.

He told the BSEC meeting that the group had created an "environment of trust".

Greater foreign investment would reverse declining levels of trade between member states, he said, and boasted of Russia's $1 million donation to promote overseas investments and enhance small- and medium-sized businesses.

Igor Dodon, president of Moldova, welcomed the success of Turkey's chairmanship and said Moldovan trade with BSEC members accounted for 48 percent of its total exports.

"The countries here constitute almost half of our foreign trade volume in both import and export," he said.

"Members of the BSEC must support each other for total development," he said. "Leaders must take the initiative and responsibility to establish links."

Serbian Foreign Minister Ivica Dacic said the organization should focus more on economic cooperation and less on political issues. The BSEC could "make a difference," he said.

Stepan Kubiv, Ukraine's deputy prime minister, said cooperation should be strengthened "in light of democratic values and ideals." He added that there could not be peace in the region while Ukraine remained territorially split.

During the summit, economic cooperation and institutional reforms are set to be discussed, additionally, a declaration for the 25th anniversary of the organization will be adopted.

The BSEC was established as a model of multilateral political and economic initiatives with the signing of the Istanbul Summit Declaration and the Bosporus Statement by the heads of state and government of the countries in the region, in June 1992.

The group consists of 12 members -- Albania, Armenia, Azerbaijan, Bulgaria, Georgia, Greece, Moldova, Romania, Russia, Serbia, Turkey and Ukraine. Turkey has been holding the BSEC's Chairmanship-in-Office since the beginning of 2017.

The organization aims to enhance interaction and harmony among its members, as well as to ensure peace, stability and prosperity, while encouraging friendly and good-neighborly relations in the Black Sea region.