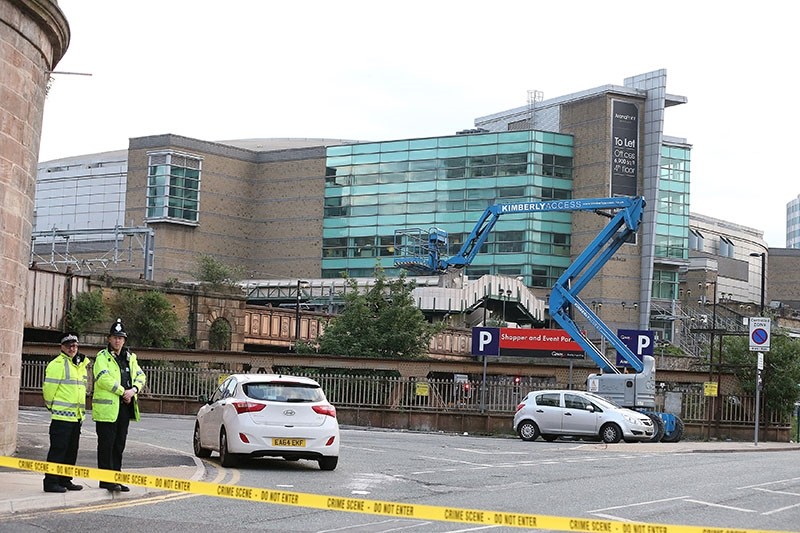 Turkish officials condemned the deadly terror attack at a pop concert in the U.K., which police say claimed 22 lives and injured dozens, including children.

Monday's blast at the 21,000-seat Manchester Arena took place shortly before 10.35 p.m. (2135GMT) local time. Police say 22 people died and 59 were injured. One man is thought to have detonated an explosive device, but died at the scene.

The arena had been hosting a concert by U.S. pop star Ariana Grande; thousands of children and young teenagers were among the crowd.

President Recep Tayyip Erdoğan condemned the deadly terror attack in Manchester during his speech at the graduation ceremony of Istanbul University, underlining that Turkey shared the sorrow of the British people.

"We share the grief of the British government and its people," Erdoğan said. "Like every country, I would like to stress that we stand with Britain in the fight against terrorism."

In a joint press conference with his Georgian counterpart Giorgi Kvirikashvili in Tbilisi, Prime Minister Binali Yıldırım said that as a country that has greatly suffered from terrorism, Turkey understands the suffering of Britain and condemns the attack in strongest terms. "We cannot make distinctions between terror groups, it only weakens our global efforts against terror," Yıldırım said.

"We offer our condolences to our ally the United Kingdom, the victims' families and we wish a speedy recovery to the injured," Yıldırım said.

I condemn the terrorist attack in Manchester. Sincere condolences to the British Government and the people.

1/We strongly condemn the terror attack in #Manchester and express our deep condolences.

2/Turkey and the United Kingdom will continue their joint and resolute fight against terrorism in all of its forms.

The Foreign Ministry said it offered "sincere condolences to the people of the United Kingdom" describing it as a country "which knows and feels the brutality of these inhumane and cowardly attacks".

It added: "We will continue our dedicated and efficient fight against terrorism, to eradicate this menace with our ally the United Kingdom.

"This will be the best answer to the cowardly attack in Manchester."

"Those who kill innocent people are the common enemy of humanity," Celik said. "Terror has no country, race, religion or language. We will continue to fight against this atrocity."