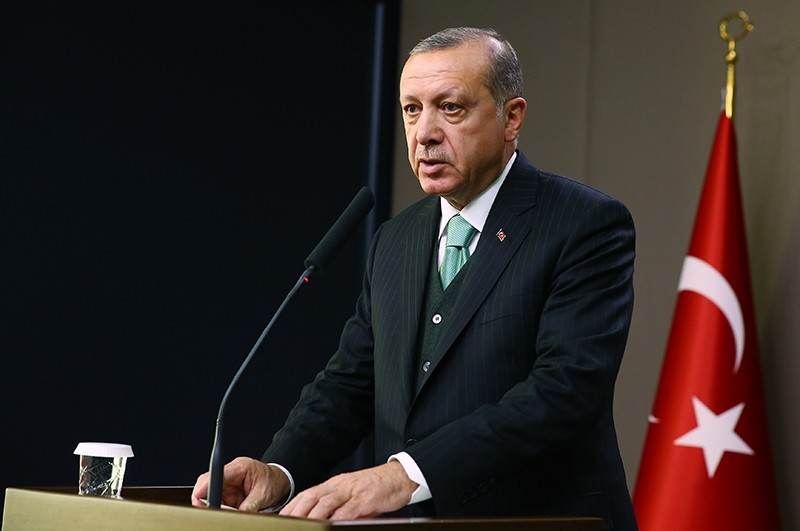 President Recep Tayyip Erdoğan will have a packed schedule during a visit to Brussels, where he will attend a NATO summit, and reiterate Turkey's determination to seek support and cooperation from allies in the fight against terrorism.

Speaking at Ankara Esenboğa Airport before his departure for Brussels, Erdoğan said terrorism is not the problem of a single country, but the entire world and highlighted that NATO needs to be more active, more supportive for allies in the fight against terrorism.

"NATO should reinforce its deterrence, needs to be more active, more supportive for allies in the fight against terrorism," Erdoğan told reporters.

Erdoğan said that the meeting was taking place in an era of "increased global uncertainties" and asymmetric menaces that are threatening the country's security.

"Terror is the primary threat among those menaces. NATO countries should be in full cooperation. The latest terror attacks have proven that terror is not a regional problem," said Erdoğan and offered his condolences to those who lost their lives in the recent terror attack in Manchester claimed by Daesh.

Erdoğan added that global threats could only be solved with global cooperation, adding NATO should give more support to member states in their fight against terrorism. "There is a differentiation such as "my" terrorist and "your" terrorist. We should take care of these problems at a global level. Instant intelligence sharing is a must. We will meet with several leaders to discuss the issue," he said.

Regarding reports of Germany evaluating a possible replacement for Incirlik Air Base located in Turkey's southern Adana province, Erdoğan said it is up to Germany to keep its troops in Incirlik.

"If Germany decides to pull out of Incirlik, we might as well say goodbye,in" Erdoğan said.

The president is expected to meet with representatives from the Union of the European-Turkish Democrats (UETD) Wednesday evening.

On Thursday, he will be meeting with newly elected French President Emmanuel Macron prior to his meeting with EU Council President Donald Tusk and EU Commission President Jean-Claude Juncker.

The president will then hold a meeting with President of the European Parliament Antonio Tajani Schulz and head to the NATO headquarters for the inauguration of a new building and attend a reception for state leaders.

At the NATO headquarters, President Erdoğan is expected to meet with British Prime Minister Theresa May and German Chancellor Angela Merkel.

Turkey-EU relations have also soured in recent years as Ankara accuses the bloc of turning a blind eye to terrorist groups, such as the PKK, the Revolutionary People's Liberation Party-Front (DHKP-C) and the Gülenist Terror Group (FETÖ). Meanwhile, Ankara also argues that EU states have been utilizing anti-Turkey rhetoric to gain an advantage in domestic politics.

During the press conference, Erdoğan said that Turkey has no intention to entirely end the accession talks with the EU, adding that however, the bloc can take such a decision if it is considering such.

"We have no such thing as breaking off ties with the EU [on our agenda.] What do they want from Turkey? It has been 54 years [since the beginning of accession talks]. They want us to be the ones to decide to withdraw. But we are saying that they if this is what they have in mind, then they should take action," Erdoğan said.

Previously, regarding the accession talks, he said Turkey no longer has the patience to wait "at the EU's door" as only 16 policy chapters have been opened out of a total of 35 since the negotiations began 54 years ago.

The association agreement between the EU and Turkey began in 1963 when Turkey and the European Economic Community signed the Ankara Agreement, also known as the Agreement Creating an Association. It is an agreement that aimed at Turkey's accession to the EEC and later paved the way for accession talks with the EU.

Ankara applied for EEC membership in 1987 and accession talks began in 2005. However, negotiations hit a stalemate in 2007 because of disagreements on the Cyprus issue. Also, the German and French governments opposed the country's full EU membership.

He is expected to finish off the visit by attending a working dinner at the NATO headquarters in Brussels, where the implementation of the previous Wales and Warsaw summits will be discussed.

The president made official visits to India, Russia and China and the U.S. shortly after the constitutional reform referendum.