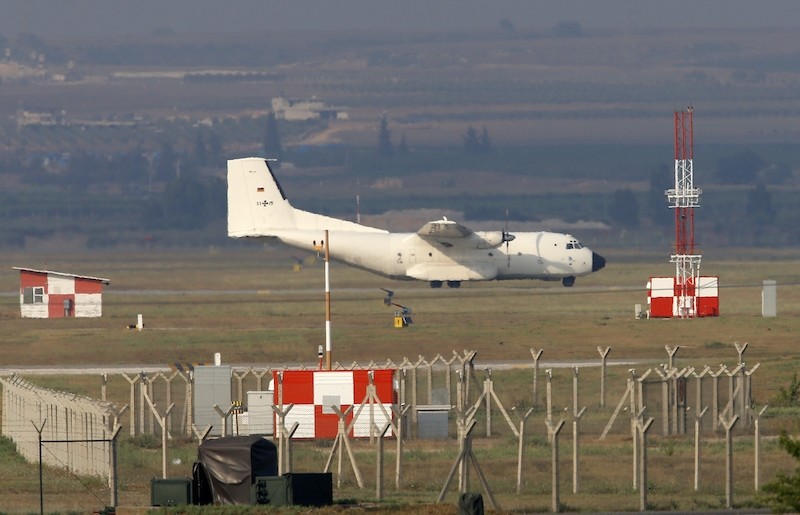 A German Air Force cargo plane maneuvers on the runway after it landed at the Incirlik Air Base, in the outskirts of the city of Adana, southern Turkey. AP Photo
by Daily Sabah with Agencies Jun 07, 2017 12:00 am

Amid a recent diplomatic row with Ankara, the German government Wednesday approved a plan to remove its troop reconnaissance aircraft from Incirlik Air Base in the southeastern province of Adana.

Berlin has decided to withdraw troops from Incirlik and relocate them to an air base in Jordan, Defense Minister Ursula von der Leyen told reporters Wednesday.

"Given that Turkey is currently not in a position to allow German parliamentarians the right to visit Incirlik, the cabinet today agreed to move the [German troops] from Incirlik to Jordan."

Von der Leyen added that the relocation would be carried out in stages in order to avoid an interruption in Germany's support for the global coalition fighting Daesh. The relocation of troops is likely to take place later this month, but von der Leyen has yet to make arrangements for how their absence will be handled in the context of the U.S.-led military coalition against Daesh.

Meanwhile, German Chancellor Angela Merkel said yesterday that talks with Turkey must continue even after the troop removal.

"We have a huge range of common interests with Turkey and also close economic relations, so discussions are very necessary," Merkel told reporters after her cabinet backed the withdrawal of troops from the base.

The relocation would mean that Germany no longer has to argue constantly with Turkey over lawmaker visits to troops, Merkel told reporters in Berlin.

"We can then concentrate in our talks on other issues," she said. "There are enough difficult things, but I don't see in this step a situation in which things have worsened."

German Foreign Minister Sigmar Gabriel visited Ankara on Monday and met with Foreign Minister Mevlüt Çavuşoğlu and President Recep Tayyip Erdoğan in an effort to overcome differences on several issues, including a visit by German lawmakers to troops at Incirlik.

Tensions between Ankara and Berlin escalated with Germany's ban on Turkish politicians' rallies prior to the April 16 referendum and Germany's stance regarding terrorist groups, including the PKK and the Gülenist Terror Group (FETÖ). PKK sympathizers have long used Germany as a safe haven for activities, including recruitment and collecting financial support, despite the group being listed as a terrorist organization by the EU, U.S. and Turkey. In addition, after the July 15 coup attempt in Turkey, suspected FETÖ members have sought asylum in Germany despite being sought by Ankara for their alleged involvement in the coup attempt. PKK followers have openly held rallies in German cities, which Ankara finds to be contradictory to it being an ally. With the recent dispute, Ankara's ban on a German parliamentary delegation visiting Incirlik Air Base has also fueled tensions.

Both foreign ministers expressed willingness to overcome differences at a joint press conference in Ankara, but the talks failed to resolve differences between the two NATO allies, as Ankara offered the German lawmakers to visit troops at a NATO military base in central Konya province instead. Gabriel said such visits have been very important, as the German armed forces were controlled by parliament, not by the executive, according to the constitution.

The Turkish government said earlier in the week that Germany's decision is not an issue they want to be part of. Prime Minister Yıldırım said on Tuesday that Ankara has not taken any decision regarding the withdrawal of German troops from Incirlik. Meanwhile, opposition Nationalist Movement Party (MHP) Chairman Devlet Bahçeli also criticized what he called Germany turning a blind eye to the PKK and FETÖ terrorist groups and that they should remove troops from Incirlik.

Since 2015, Germany has stationed six Tornado surveillance jets and a tanker aircraft at Incirlik, along with around 260 personnel, providing intelligence and logistics support to anti-Daesh operations.