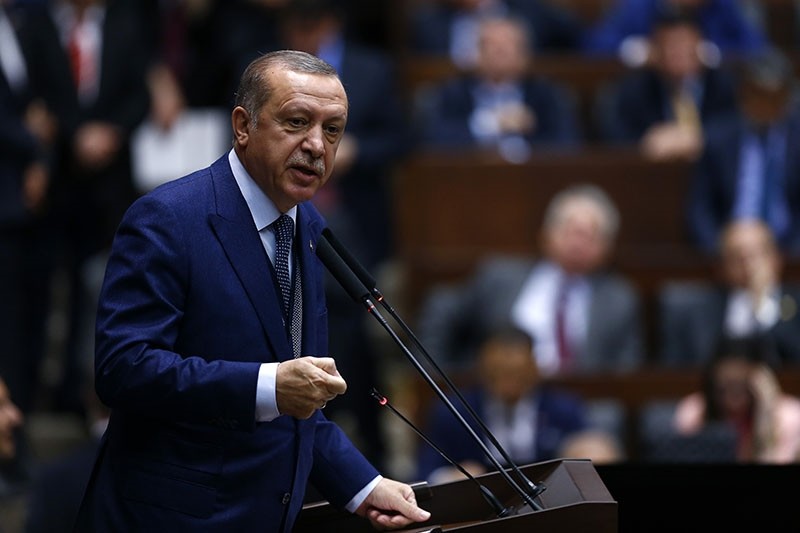 President Recep Tayyip Erdoğan criticized Monday the sanctions imposed against Qatar, describing them as inhumane and non-Islamic, and calling on Gulf and Arab countries to solve the issue.

Erdoğan likened the sanctions to a "death penalty" sentence for Qatar, which he deemed unacceptable.

"Qatar along with Turkey is a country that took the most determined stand against the terrorist organization, Daesh," said Erdoğan.

Calling on Saudi Arabia to solve the recent crisis between Qatar and several other Gulf countries, Erdoğan said, "The king of Saudi Arabia, as leader of the Gulf, should resolve this issue. I think that he should lead the way in resolving this crisis."

He is also expected to discuss the issue with U.S. President Donald Trump in the upcoming days.

In a joint statement, Saudi Arabia, Bahrain, Egypt and the UAE last week also accused 59 individuals and 12 charity organizations in Qatar of having links to terrorists, local media reported.

The list included the International Union of Muslim Scholars' Egyptian chairman, Yousef el-Qaradawi, and Abdullah bin Khalid, a former Interior Minister of Qatar. The declaration was rejected by Qatari authorities.

Turkey is one of the few countries actively taking on Daesh on the ground in Syria. Having launched Operation Euphrates Shield in Syria on Aug. 24, 2016, to battle Daesh on the ground, the Turkish military liberated more than 2,000-square-kilometers from the terrorist group. The army took full control of areas that used to be recognized as Daesh strongholds such as Jarablous, Dabiq and al-Bab.

Ankara's fight against Daesh is not only limited to the operations in Syria. Since Daesh has emerged as a terrorist group in war-torn Syria. Turkey has so far detained over 5,000 Daesh suspects and deported over 3,290 foreign terrorist fighters from 95 countries, and denied more than 38,269 individuals entry to Turkey.

Qatar has also been effective in the fight against Daesh. Home to one of the biggest U.S. military bases in the region, Qatar is a significant hub in the fight against Daesh. The base has one of the longest runways in the Persian Gulf measuring at 12,500 feet. It is also an important facility that can accommodate up to 120 aircraft and can host up to 10,000 U.S. soldiers.

The Pentagon has been content with Qatar's role in the fight against terrorism as well. Pentagon spokesman Navy Captain Jeff Davis said last week that the U.S. "continues to be grateful to the Qataris for their longstanding support for our presence and their enduring commitment to regional security," adding the U.S. had no plans to alter its presence in Qatar.

The Turkish Armed Forces said in a statement on Tuesday that a three-member delegation was sent to Qatar to carry out preparation for the troop deployment.

The Parliament approved on June 7 two military deals signed with Qatar in December 2015, allowing Turkish troops to be stationed in the Gulf nation and Turkish gendarmarie to train Qatari units.

During his address, Erdoğan also criticized the independence referendum decision by the Kurdistan Regional Government (KRG).

"The Northern Iraqi regional government seeking a referendum is upsetting; this is a threat against Iraq's territorial integrity and is a wrong step," Erdoğan said, noting that the decision benefited no one during a critical process.

The president added that Turkey wished the referendum had be brought up after dialogue with other actors in northern Iraq as the KRG shares the region with Arabs and Turkmens.