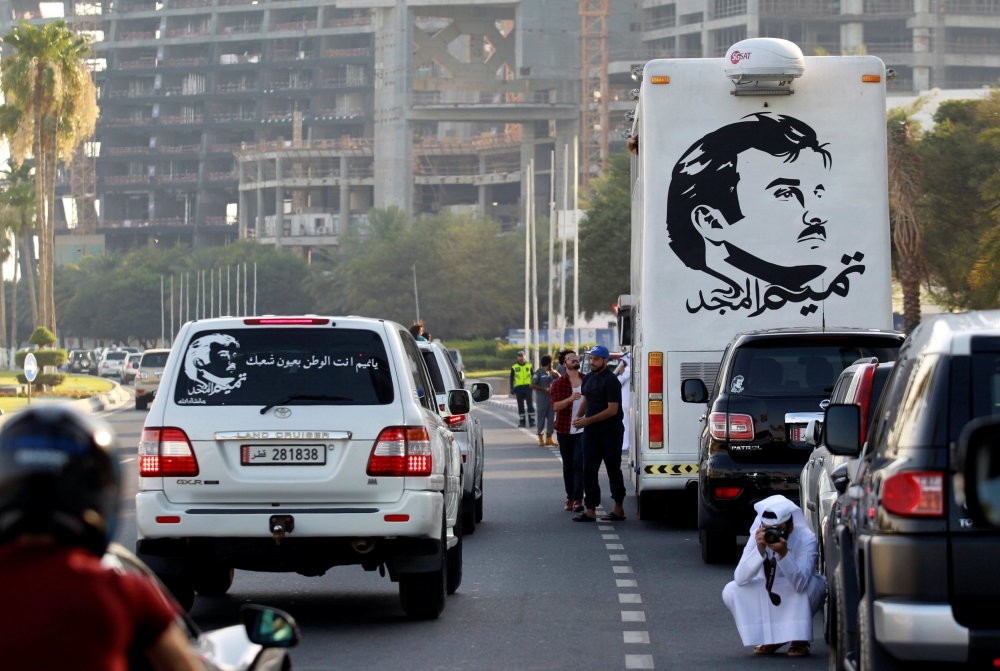 A painting depicting Qatari Emir Sheikh Tamim bin Hamad al-Thani on a bus during a demonstration against the imposed blockade by several Gulf states and in support of him in Doha, June 11.
by Daily Sabah Jun 13, 2017 12:00 am

An intensified Gulf crisis will fuel regional tensions along with already existing conflicts, Ankara said yesterday, adding that all countries in the region would pay a heavy price if the recent row further escalates

As part of its efforts to ease tension in the Gulf region, Ankara has called on all parties to come to a common solution and overcome differences to avoid a sectarian crisis in the region, which would put all countries in danger. "With all the already existing problems in the region, and particularly at a time when there is an apparent tendency to trigger a sectarian conflict, the Gulf states, which are very close to each other in their culture and traditions, should overcome differences with sincere efforts and deliberateness," the government spokesman, Deputy Prime Minister Numan Kurtulmuş, said at a press conference in Ankara after the Cabinet meeting Monday.

Foreign Minister Mevlüt Çavuşoğlu said on Saturday at a joint press conference with his Bahraini counterpart Shaikh Khalid bin Ahmed bin Mohammed al-Khalifa in Istanbul that President Recep Tayyip Erdoğan told Khalifa that the Qatar dispute should be resolved by the end of the Islamic holy month of Ramadan.

"We give the same advice to all countries. Ultimately, it is apparent that the furthering of the crisis would bring a heavy price for all countries in the region. You do not have to be an oracle to predict that," Kurtulmuş said, adding that regional developments have shown that previously.

The escalation came two weeks after the website of Qatar's official news agency was allegedly hacked by unknown individuals who reportedly published statements attributed to the country's emir.

Qatar has vehemently denied the accusations, describing the moves to diplomatically isolate the country as unjustified.

Meanwhile, Qatar has said it is willing to listen to the concerns of the Gulf countries, Kuwait, one of the countries making efforts as a mediator to find a solution in the crisis, said on Sunday, according to Reuters.

Çavuşoğlu met with the ambassadors from Saudi Arabia and the UAE, and Bahrain's charge d'affaires in Ankara to discuss the ongoing Qatar row. Earlier Saturday, Khalifa also visited Ankara.

During the meeting, Çavuşoğlu told the diplomats of Turkey and the international community's expectations, including his talks with officials from other countries regarding the crisis in the Gulf region.