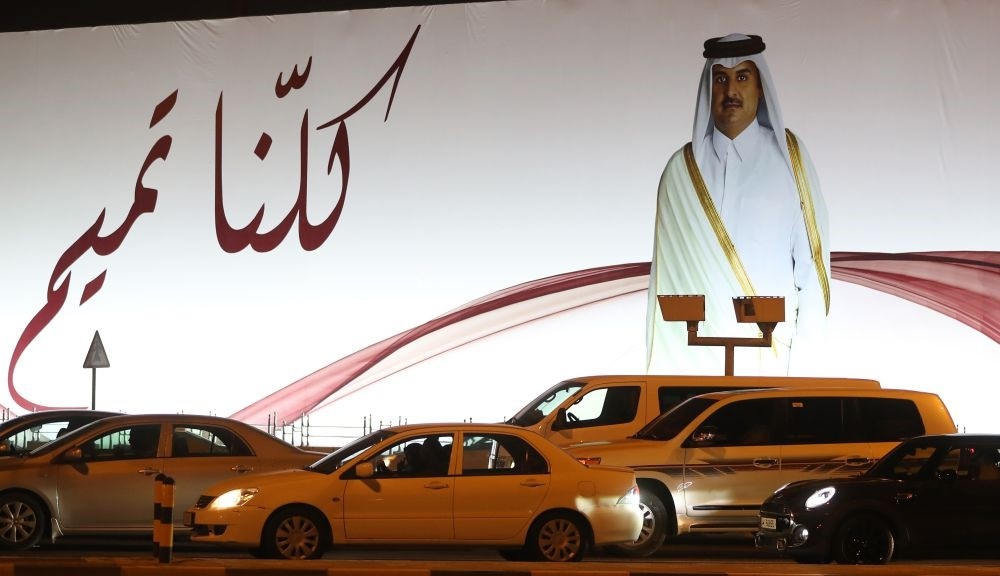 Photo shows a portrait of Qatar's Emir and text reading in Arabic: ,We are all Tamim, on a billboard outside the Qatar Sports club in Doha after the diplomatic crisis between Qatar and several other Gulf countries, June 11.
by Daily Sabah Jun 15, 2017 12:00 am

Turkey has reiterated its aim of solving the rift between the Gulf states through diplomatic channels, urging Saudi Arabia to lead the dialogue efforts and solve the Qatar issue peacefully

PresIdentIal spokesman İbrahim Kalın said Wednesday that Turkey considers Saudi Arabia to be the most sensible and mediatory country in the region that can potentially help solve the crisis between Qatar and the Gulf countries. Speaking during a press conference at the Presidential Palace in Ankara, Kalın stressed that Saudi Arabia plays an important role in the crisis-solving process, noting: "I must express that Saudi Arabia has a very special place in the context of this issue. Saudi Arabia has the resources and the ability to solve this crisis as the sensible state in the region," he added.

"The king of Saudi Arabia, as the leader of the Gulf [region], should solve this issue." Previously on Tuesday, President Recep Tayyip Erdoğan said, "I especially think that [King Salman] should lead the way towards resolving this crisis."

Kalın said that Ankara wants to involve all actors in the process for reconciliation. "Our president will have a phone conversation with [U.S. President Donald] Trump. We are working very closely with all these countries multiple times on a daily basis to minimize the crisis," he added.

The presidential spokesman also said that Ankara has been exerting efforts to solve the crisis between Qatar and several Gulf counties and will continue to do its best in this regard.

Kalın said that diplomatic efforts over the phone will continue this week as well, adding that Turkey's Foreign Minister Mevlüt Çavuşoğlu and Economy Minister Nihat Zeybekci will spend time in Qatar to help find a solution to the strife.

"Our aim is that this issue will be solved through negotiations and that this crisis will not escalate," Kalın stressed.

Underscoring that Turkish nongovernmental organizations (NGOs) and state institutions have mobilized in order to prevent Qatar from being adversely affected by the blockade on the country, Kalın said that the process of deploying Turkish troops to Qatar has been approved.

"The aim of [deployment to] this air base [in Qatar] is to provide security for all states in the region," the presidential spokesman asserted. Meanwhile, Minister Çavuşoğlu flew to Qatar yesterday amid the tensions between Doha and the Gulf states, the Ministry said in a statement.

Saudi Arabia, Egypt, the United Arab Emirates (UAE), Bahrain and Yemen abruptly cut diplomatic relations with Qatar on June 5, accusing Doha of supporting terrorism. Mauritania followed suit shortly thereafter, while Jordan downgraded its diplomatic relations with Qatar. Doha vigorously denies the accusations, characterizing the allegations as an "unjustified" attempt to isolate the country diplomatically. Turkey has said that it stands with Qatar against the imposed sanctions and has urged Saudi Arabia to take the lead in finding a solution to the crisis.

Also, Saudi Arabia, Bahrain, Egypt and the UAE last week accused 59 individuals and 12 charity organizations in Qatar of having links to terrorists, according to local media reports.

Turkish Prime Minister Binalı Yıldırım recently warned that the Qatar dispute could become a global problem due to the geostrategic nature of the region if tensions rise, calling on all parties involved in the dispute to "act responsibly and work to reduce tension rather than increase it."