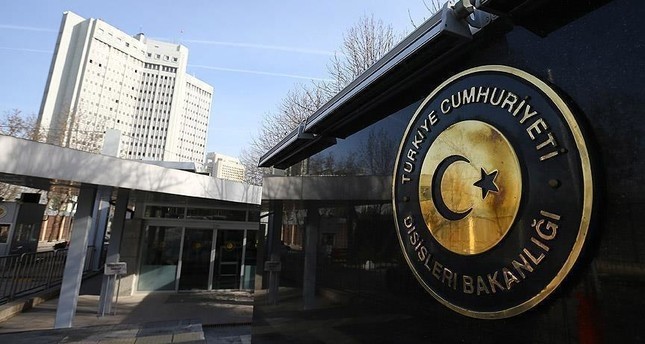 The Turkish Foreign Ministry summoned U.S. envoy to Ankara, John Bass over the U.S.' decision to issue arrest warrants against President Recep Tayyip Erdoğan's security guards and some Turkish citizens after the incident which took place in Washington.

The U.S. authorities' decision to issue arrest warrants for Turkish security guards is not independent or objective, the foreign ministry said in a statement published late Thursday.

The foreign ministry noted that the U.S. ambassador was told that the decision made by U.S. authorities is wrong, biased and lacks legal basis and that the brawl in front of the Turkish ambassador's residence in Washington took place as a result of the failure of U.S. security officials to take necessary measures.

The ministry also noted that such an incident would not have occurred had U.S. authorities taken the proper measures they take during similar high level visits.

"The Ambassador of the United States of America in Ankara has also been informed that the tolerance of the U.S. authorities towards the so-called protesters to approach as close as a few meters to the Turkish Residence with flags and symbols of terrorist organization and their assault to innocent citizens, as well as the lack of any action taken against the U.S. security personnel who assaulted the security guards of our Minister in front of the Chancery run counter to any understanding of justice," the statement read, adding that the decision is unacceptable.

During Erdoğan's meeting with U.S. President Donald Trump at around 12:30 p.m. local time, PKK supporters, as well as some protesters carrying Armenian flags, started shouting slogans against Turkey and Erdoğan at Lafayette Square park, just north of the White House.

A group of Turkish citizens, who were also there to support Erdoğan and Turkey, started to respond to the group's verbal harassment.

The first fight reportedly broke out at the Turkish Embassy when supporters of the terrorist group threw water bottles at Turkish citizens, triggering a 10-15 second fist fight in the middle of the road.

Only two police officers interceded in the fight, and it was clear the police were not ready for this scene, as there were only around 10 police officers outside the embassy.

Later when Erdoğan arrived at the embassy building, protesters continued their grave insults, shouted slogans and threw water bottles. Some Turkish citizens and the head of the president's security detail stepped in.

After security interceded, the group dispersed.