Time to get on same page, Turkey and Greece agree with a nod to past 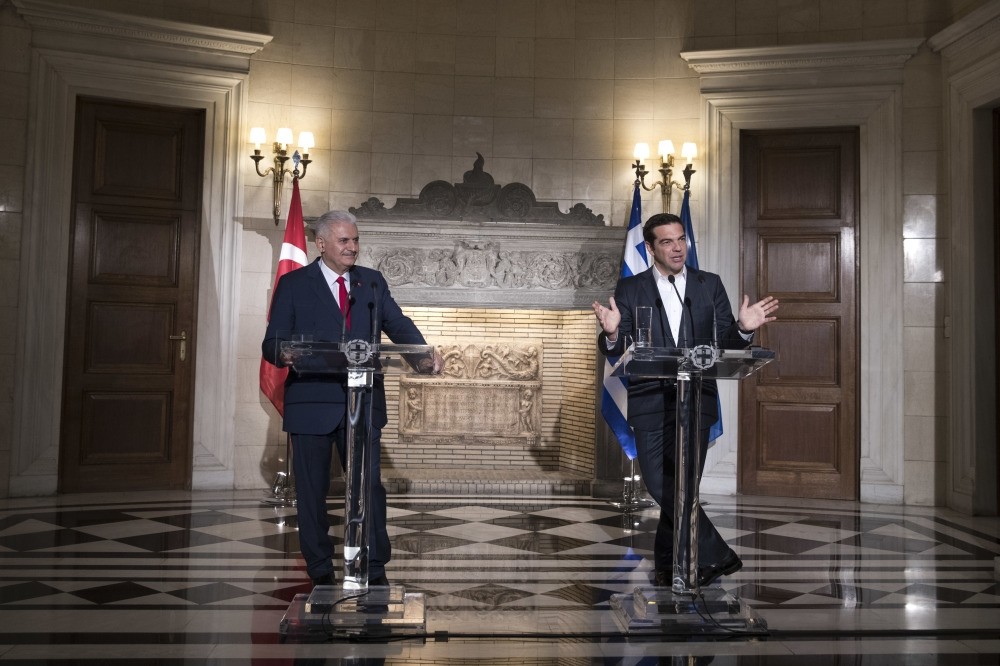 Despite a significant difference on the extradition of putschits soldiers from Greece to Turkey, Prime Minister Yıldırım's meeting with his Greek counterpart in Athens is expected to help rebuild bilateral ties as both leaders expressed the need for further dialogue and solidarity

Prime Minister Binalı Yıldırım paid a one-day working visit to Greece on Monday to break the ice regarding bilateral relations. Yıldırım met with his Greek counterpart Alexis Tsipras and was received by Greek President Prokopis Pavlopoulos in Athens. Accompanied by four Turkish ministers, Binali Yıldırım's visit took place during a time of tense relations between the two countries. Turkish relations with Greece have soured in recent months, mainly in response to a controversial Greek supreme court decision regarding fugitive Gülenist Terror Group (FETÖ) coup plotters and negative messages conveyed from the Greek side about the Aegean Sea conflict.

However, after the meeting, which lasted about one-and-a-half hours, both the Turkish and Greek prime minister expressed their willingness to move forward, emphasizing solidarity and mutual dialogue in solving issues in the region. Speaking at a joint press conference after the meeting, Yıldırım emphasized that Turkey respects the Greek court's decision regarding fugitive Gülenist Terror Group (FETÖ) coup plotters. "We respect the judiciary's decision but we do not want [the situation surrounding these] coup plotters to strike a blow to Turkish-Greek relations," Yıldırım told reporters. Meanwhile, Prime Minister Tsipras said that solving challenges in a constructive manner remains a top priority, asserting prior to the meeting that Athens "wishes to maintain this good relationship."

Yıldırım said, "We are neighbors. …we share the same geography and we share the same destiny. We have problems from time to time but a solution can be reached through mutual dialogue." Touching on the difficulties in the region; namely, security issues affecting Turkey's southern borders as well as the violence in Syria and Iraq, Yıldırım said, "I believe that we can overcome these challenges with good faith, mutual understanding and solidarity." Tsipras said that he believes the visit marked an important step for both bilateral and regional developments, emphasizing that Greece wishes to continue on a path of good relations with Turkey. "As neighboring countries, instead of trying to exploit each other's hardships, we should try to help each other. I hope we will continue to do this," Tsipras said.

Regarding the Cyprus issue, both leaders agreed that it is imperative to reach a solution that will "safeguard the future and security of both Turkish and Greek Cypriots," Yıldırım said. Regarding Turkish-EU relations, Yıldırım told reporters that Turkey aims to embark on a "new beginning" with the EU. "Unfortunately, the EU adopted a negative stance in the aftermath of the [July 15, 2016] coup attempt and during Turkey's process of constitutional change [referring to the April 16 referendum]. …However, all of these issues are behind us. Now, the EU and Turkey want to turn over a new leaf with a new vision," Yıldırım said.

The prime minister went on to say that the Turkey-EU migrant deal signed in 2015 has helped to curb the refugee flow remarkably, despite the fact that Europe had not yet fulfilled its part of the deal. "Visa liberalization for the Turkish people and financial support for Turkey's hosting of refugees have not yet been properly addressed," the Turkish leader added. Greece supports Turkey's EU accession course, which could help resolve issues in the region and stimulate further cooperation, Tsipras said.

Following the meeting, Yıldırım was received by Greek President Pavlopoulos. Speaking ahead of private talks, Pavlopoulos stressed that Greece and Turkey have more in common than appearances might suggest. "There are more things that unite us than divide us," Pavlopoulos said, adding that "Greece is Turkey's door and window to the EU." Yıldırım, on the other hand, said that Turkish President Recep Tayyip Erdoğan is also looking forward to paying a visit to Greece before the end of this year.

İlhan Tahsin, a journalist from Komotini in Western Thrace, cast doubts upon whether the visit would have a considerable impact on bilateral relations. "Turkey and Greece have been going through a tense time for one year. I think that Prime Minister Yıldırım's visit will not really help either country in deescalating tensions," he contended.

Stressing that the problems in Turkish-Greek ties will linger in the upcoming period, Tahsin said that Tsipras had a negative approach to the joint press conference. Pointing to tensions stemming from the Aegean Sea issue and the Cypriot issue, the journalist said: "It will not be surprising to me if we see tensions escalate; especially due to the problems in the Aegean. Greece is not a big country but it is a source of major problems for Turkey and will remain so."

However, Greek journalist Stelyo Berberakis believes that Yıldırım's visit came at a very appropriate time. "Bilateral relations will have a better agenda in the upcoming period compared to last year. The visit certainly made a significant contribution to attempts to break the ice between the two countries," Berberakis said, adding that Tsipras' words at the press conference showed that both sides have intentions to "start over."

"Both prime ministers generated a consensus on keeping channels of dialogue open between the countries' military organizations as well as among politicians, in order to prevent possible tensions in the Aegean," the Greek journalist said. He also underscored that the two prime ministers signaled that both sides are making the necessary preparations for successful Cypriot negotiations.

Berberakis said that Yıldırım's indication that President Erdoğan would be pleased to pay a visit to Greece by the end of 2017 is a positive sign, noting: "If this visit were to take place, Erdoğan would be the first Turkish president to visit Greece in 70 years. Such a visit would accelerate bilateral relations," he said.

After completing their meetings in Athens, the Turkish delegation led by Prime Minister Yıldırım went to Komotini in Western Thrace and attended an iftar (fast-breaking) dinner organized by the Turkish minority in Greece.