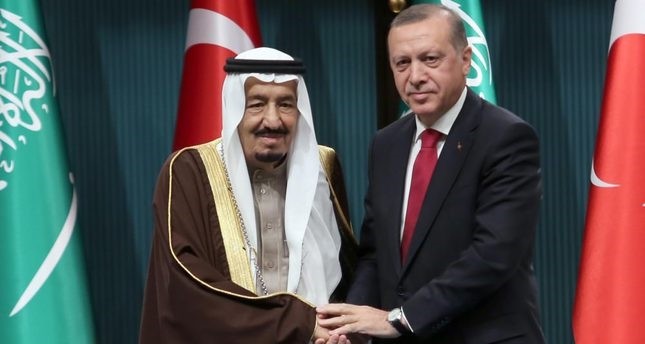 President Recep Tayyip Erdoğan spoke on the phone with Saudi Arabia's King Salman and newly appointed Crown Prince Mohamed bin Salman early Thursday, during which they agreed "to increase the efforts to end the tension in the axis of Qatar."

President Erdoğan congratulated Mohamed bin Salman on being named crown prince and they both expressed a desire for stronger ties between their countries, presidential sources said.

Ankara has carried out shuttle diplomacy between Qatar and the Gulf countries imposing a blockade on Qatar in efforts to speed up reconciliation through diplomatic channels.

On June 5, Saudi Arabia, the United Arab Emirates, Bahrain, Egypt and Yemen cut ties with Qatar, accusing Doha of supporting terrorism. Qatar has denied the accusations, saying the move to diplomatically isolate it was unjustified.

Erdoğan has repeatedly voiced concern over the blockade on Qatar, calling on the Gulf states to resolv

e the situation before the end of the Islamic holy month of Ramadan.

Speaking to reporters early yesterday in Ankara, Kalın added that going forward, Turkey-Saudi relations will continue to strengthen and that Ankara already has a strong relationship with the newly appointed crown prince.

"Of course, as the strongest country in the Gulf and one of the biggest countries in the Islamic world, Saudi Arabia will play a big role for overcoming the tensions with Qatar and in finding a peaceful solution. During the meeting [between Erdoğan and Salman] this was also underlined," he said.

Kalın also said the Gulf states are important partners for Turkey, and that Ankara does not want any sort of tension. "We also do not want them to be in any crises among themselves. This has been our approach from the beginning," he affirmed.

In addition, Foreign Minister Mevlüt Çavuşoğlu paid an official visit to Qatar, Kuwait and Saudi Arabia as part of Ankara's efforts. After the economic blockade on Qatar, Turkey sent 105 cargo planes of food to Qatar.

The first batch of 25 Turkish soldiers who left for Qatar to be stationed at the Turkish military base arrived in the country early yesterday. Turkey will also send five armored vehicles as part of the first unit of deployment.

The deal that would allow the troop deployment to Qatar to improve the country's armed forces and boost military cooperation was signed in April 2016, in Doha.

Under the legislation, the military forces of both countries will also be able to carry out joint exercises. Officials from both Qatar and Turkey have said the move is to contribute to regional and world peace.

Ankara has emphasized that it has strong strategic relations with Qatar, but that it is not taking sides in the Gulf dispute.

Meanwhile, Washington has also toned down its approach to the crisis. Although U.S. President Donald Trump initially supported the anti-Qatar move, there has been a shift in approach to the situation in which the U.S. has called on the Saudi-led group of countries to present their demands to Qatar.

The United States hopes Arab countries involved in the diplomatic split with Qatar will soon present Doha a list of "reasonable and actionable" demands to move the crisis toward a resolution, U.S. Secretary of State Rex Tillerson said on Wednesday.

Tillerson's comments came in a short statement a day after the U.S. State Department bluntly questioned Saudi Arabia and the UAE's motives for announcing their boycott of Qatar on June 5, saying it was "mystified" the Gulf states had not released their grievances.

Erdoğan and King Salman will have a face-to-face meeting at the G20 summit on July 7-8 in Hamburg, Germany.

In a royal decree early Wednesday, Salman placed his son, Mohammed bin Salman, 31, first in line to the throne. He also relieved Prince Mohammed bin Nayef, 57, from his position as the deputy prime minister and interior minister.