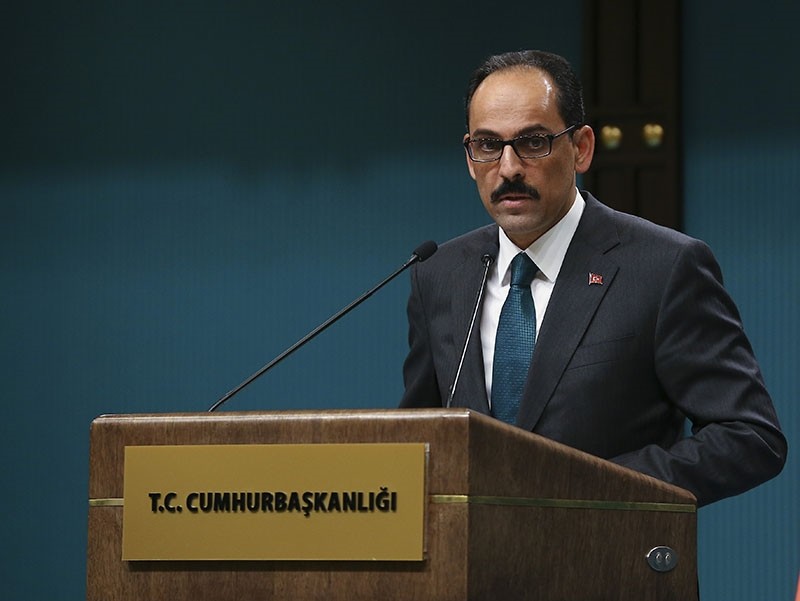 Turkey, Russia and Iran are working on a mechanism on de-escalation zones in Syria involving the U.S. and respective zones assigned to each country, Presidential Spokesperson İbrahim Kalın said, adding that the Astana and Geneva processes will continue in order to establish permanent peace in Syria.

Speaking to reporters at the sahur meal on early Thursday at the Beştepe Presidential Complex in Ankara, Kalın said that as part of the mechanism, Turkey and Russia could jointly deploy forces to Syria's northwestern Idlib area, which is currently controlled by opposition groups.

Kalın stated that Russia and Iran would also deploy forces to the Damascus area, controlled by the Assad regime, whereas Jordan and the U.S. would deploy troops to Daraa area in the south as a part of a de-escalation zone plan Ankara, Moscow and Tehran formulated in May.

"Russians have a proposal: Maybe the Kyrgyz, or Kazaks would deploy a number of troops. They could also be involved in this task force," Kalın said.

Noting that the primary aim of the mechanism is to give structure to the truce, Kalın said that a detailed plan is being carried out to determine which country would take over a specified area or the number of troops to be deployed in that particular assigned zone.

"As you know, dec-escalation zones were established in four main locations in Syria after President [Recep Tayyip] Erdoğan's meeting with Russian President [Vladimir] Putin in Sochi on May 3. The negotiations between Turkish, Russian and Iranian officials are ongoing on technical work, including whose troops will be stationed in those de-escalation zones, how security will be maintained and who will observe the process," he said.

Turkey, Iran and Russia previously agreed on the decision on the establishment of de-escalation zones in Idlib, parts of Aleppo, Latakia and Homs, Damascus/Eastern Ghouta and parts of Daraa and Quneitra.

He added tangible results have been obtained in the Syrian peace process over the last six months and, despite some violations, conflicts have been minimalized with the cease-fire agreement, which was implemented in December 2016.

Turkey and Russia have played a key role in establishing a nationwide cease-fire in the war-torn country and later agreed on the evacuation of Aleppo in late December 2016. After that, along with Iran, three countries took the initiative to bring together the Syrian regime and opposition in Astana to sustain a cease-fire agreement and to negotiate a political transition in the country.

Emphasizing that the Geneva and Astana talks complement each other on the road to establishing permanent peace in Syria, Kalın said the continuation of the two talks together will contribute to the cessation of conflicts, providing humanitarian aid and accelerating a political solution in the country.