US to retrieve weapons from YPG when Daesh defeated 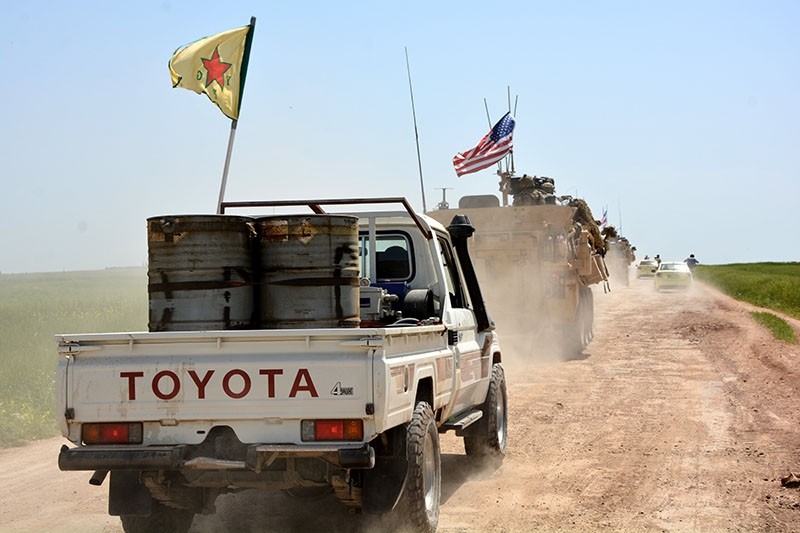 A convoy of US army troops and militants from PKK's Syrian offshoot the People's Protection Units (YPG) patrol near al-Ghanamya village, al-Darbasiyah town at the Syrian-Turkish border, Syria, April 29, 2017. (EPA Photo)
by daily sabah Jun 22, 2017 12:00 am

The United States will retrieve the weapons it sent to the PKK affiliate YPG in Syria's Raqqa when the Daesh terror group is defeated, U.S. Secretary of Defense James Mattis has said in a letter to his Turkish counterpart Fikri Işık.

According to Turkish Ministry of Defense sources, Mattis sent a letter to Işık, in which he gave detailed information about the military materials and equipment provided to the YPG for the fight against Daesh in Raqqa.

In the letter, Mattis said that the U.S. was in a tactical cooperation with the PKK-affiliated YPG dominated Syrian Democratic Forces (SDF), underlining that the U.S. was guaranteeing transparency in this relationship.

The U.S. secretary of defense stressed that Turkey-U.S. relations were based upon a strategic partnership before the common aim of fighting Daesh.

Mattis also ensured that the U.S. would share a list of materials given to the YPG each month with Turkey, adding that the first inventory report was sent this month.

Mattis emphasized that the distributed weapons would only be used within Syria and that U.S. experts were employed in the field to observe the operations, assuring that the weapons would not cross the borders.

The U.S. secretary of defense said that the units to recapture Raqqa would consist 80 percent of Arabs, adding that Arabs would have control over the city.

The letter ended with Mattis' wish to hold a bilateral meeting with Işık next week in Brussels.