US tones down rhetoric on Gulf crisis, calls on both sides to lay all cards on table 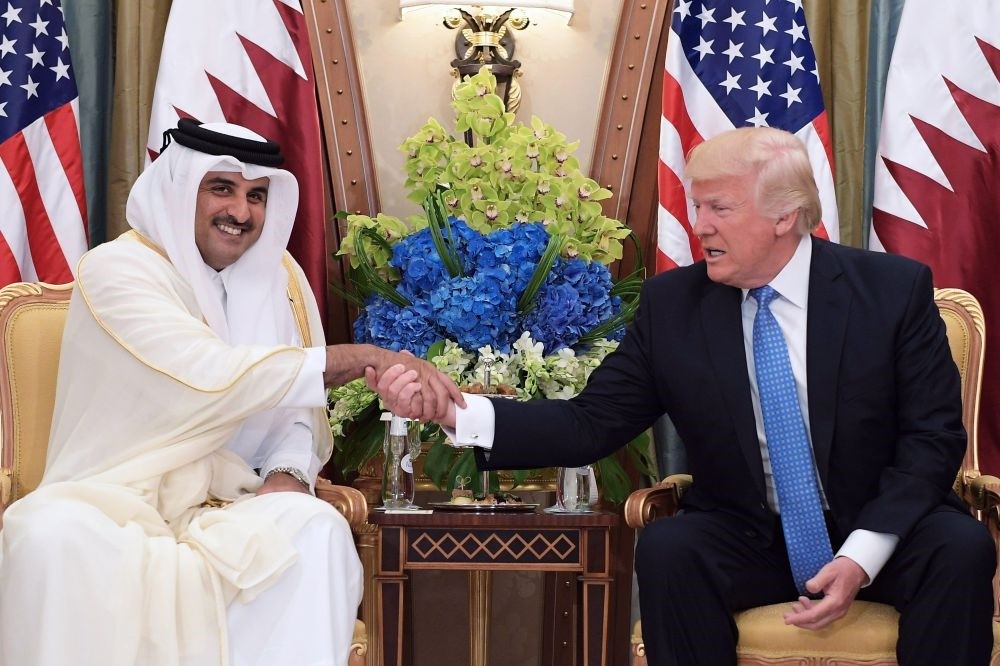 This file photo taken on May 21, shows U.S. President Donald Trump shaking hands with Qatar's Emir Sheikh Tamim Bin Hamad Al-Thani, during a bilateral meeting at a hotel in the Saudi capital Riyadh.
by Daily Sabah with Agencies Jun 22, 2017 12:00 am

Trump administration has said that the anti-Qatar Gulf states should specify their terror related demands from Qatar to avoid it from lingering, easing the tone on the crisis and seeking a diplomatic solution

The United States has toned down its approach to the Gulf crisis, signaling an increase in efforts to ease tensions between Qatar and its Arab neighbors by calling for Saudi Arabia and its partners to produce a list of demands for Qatar to consider. In comments Tuesday that suggested U.S. Secretary of State Rex Tillerson is losing patience in his mediation attempt, the U.S. State Department said it was "mystified" that Saudi Arabia, Bahrain, Egypt and the United Arab Emirates had not yet made clear what they want to end their blockade on Qatar. Turkey has also voiced its concern over the escalation of the crisis, calling for all sides to reach a solution.

Ankara is also communicating with all sides as part of its diplomatic efforts to speed up reconciliation. Spokeswoman Heather Nauert also questioned if the blockade is a response to Qatari support for extremism, as the Saudis and others claim, or results from long-simmering tensions. "The more the time goes by, the more doubt is raised about the actions taken by Saudi Arabia and the UAE. At this point, we are left with one simple question: Were the actions really about their concerns regarding Qatar's alleged support for terrorism or were they about the long-simmering grievances between and among the (Gulf Cooperation Council) unties GCC countries," Nauert said.

She said Tillerson had held more than 20 phone calls and meetings on the crisis. Qatar welcomed the U.S. position questioning the motives of Gulf allies for their blockade on Doha.

In a statement, Ahmed al-Rumaihi, a spokesman for the Qatari Foreign Ministry, welcomed the U.S. position regarding the Gulf crisis.

Nauert's statement was in contrast to the position of U.S. President Donald Trump, who accused Doha of supporting terrorism.

Qatar has a vital U.S. military airbase, Al-Udeid, where more than 11,000 U.S. and coalition forces are deployed.

On June 5, Saudi Arabia, the UAE, Bahrain, Egypt and Yemen cut ties with Qatar, accusing Doha of supporting terrorism. Qatar has denied the accusations, saying the move to diplomatically isolate it is "unjustified".

Trump had previously supported the anti-Qatar axis verbally, saying that his move to pressure Arab nations to confront terrorism was "paying off" as Gulf nations isolated Qatar.

"So good to see the Saudi Arabia visit with the King and 50 countries already paying off," Trump wrote in a series of tweets. "They said they would take a hard line on funding extremism, and all reference was pointing to Qatar. Perhaps this will be the beginning of the end to the horror of terrorism!"

Last week, Qatar's defense ministry announced that Doha signed an agreement with Washington to buy $12 billion worth of F-15 jets. The contract was also considered part of the mixed messages from the U.S. as it attempts to navigate the Gulf diplomatic crisis.

Meanwhile, Ankara yesterday once again criticized the Gulf countries' measures taken against Qatar, saying the sanctions are not helping to solve the crisis.

"The measures taken against Qatar are indeed disproportionate and do not contribute to the resolution of the crisis," İbrahim Kalın, Turkey's presidential spokesman, wrote in a column for Daily Sabah, "The Qatar crisis, Turks and Arabs."

President Recep Tayyip Erdoğan has repeatedly voiced concern over the blockade on Qatar, calling the Gulf states to resolve the situation before the end of the Islamic holy month of Ramadan.

In addition, Foreign Minister Mevlüt Çavuşoğlu paid and official visit to Qatar, Kuwait, and Saudi Arabia as part of Ankara's efforts to solve the crisis through diplomatic dialogue and act as a mediator. After the economic blockade on Qatar, Turkey has also sent large amounts food to Qatar.

Economy Minister Nihat Zeybekci said yesterday that Turkey has sent 105 aircraft carrying food so far, and that its first vessel carrying food will be sent on Wednesday as the logistics are not sustainable to continue with planes alone.

Ankara has emphasized that it has strong strategic relations with Qatar, but that it is not taking sides in the dispute.