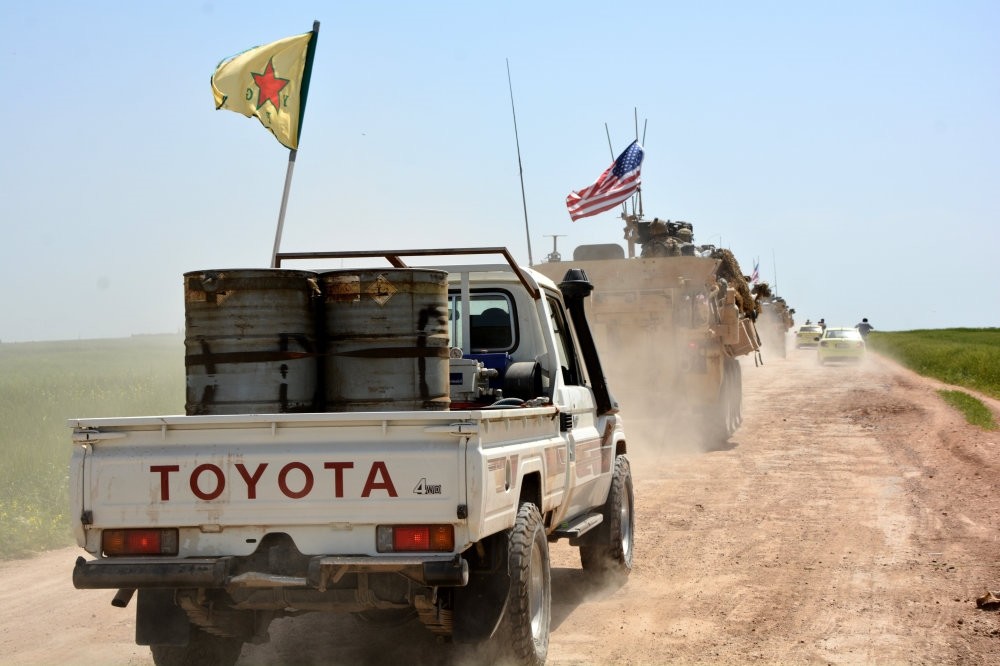 A convoy of U.S. army troops and militants from the PKK's Syrian affiliate the YPG patrol near al-Ghanamya, al-Darbasiyah along the Syrian-Turkish border, Syria, April 29.
by Şeyma Nazlı Gürbüz Jun 23, 2017 12:00 am

Although the U.S. makes promises to Turkey regarding its security against terrorist organizations, the Turkish public has been further losing confidence in the country since the last year's July 15 coup attempt

The Turkish public does not trust the U.S. as statement to Turkey that the weapons given to the People's Protection Units (YPG) will be retrieved after the end of operations and not used against Turkey, analysts suggest.

According to Bora Bayraktar, an academic in the International Relations Department at Istanbul Kültür University, there is a huge distrust of the U.S. among the Turkish public.

"Turkish society would rather focus on what the U.S. does rather than what it says," Bayraktar said, referring to the recent U.S. arming of the PKK Syrian affiliate, the Democratic Union Party's (PYD) YPG militia.

Defense Ministry sources said yesterday that U.S. Secretary of Defense James Mattis sent a letter to his Turkish counterpart, Fikri Işık, indicating that the U.S. will retrieve the weapons it sent to the YPG in Syria's Raqqa when Daesh is defeated.

The president of the A&G research company, Adil Gür, said that every statement from the U.S. that supports the YPG, results in an increase in anti-U.S. sentiment in Turkey. "Our studies show that the 90 percent of Turkish society does not see the U.S. as their ally or friend. In the past, this percentage was around 60 to 70 percent," Gür said, adding that the percentage rose especially after the failed July 15 coup attempt.

In the letter, Mattis emphasized that the distributed weapons would only be used within Syria and that U.S. experts were deployed in the field to observe the operations, giving assurances that the weapons would not cross the borders.

"There are two topics regarding U.S. relations with Turkey: the support of the YPG and the extradition of the FETÖ leader. Both have to be dealt with before Turkish public opinion can change in favor of the U.S.," Gür said, referring to the lack of cooperation of the U.S. with Ankara's request for the extradition of the leader of the Gülenist Terror Group (FETÖ), Fetullah Gülen, which created a lack of confidence in the U.S. in Turkey. Gülen has been charged by Turkish prosecutors with forming an armed terrorist organization and orchestrating the abortive coup. Gülen and his FETÖ network are accused of being behind a long-running campaign to overthrow the state through infiltration of state institutions, particularly the military, police and judiciary.

"Unless the U.S. does something about FETÖ, it does not matter for Turkish society whether the U.S. retrieves its weapons from the YPG or not. Turkish public opinion is against every terrorist-supporting statement from the U.S., not only the ones relating to the YPG," Gür added.

Mattis also ensured that the U.S. would share a list of materials given to the YPG each month with Ankara, adding that the first inventory report was sent this month.

"Politically and practically, it is not possible for the U.S. to retrieve the weapons that were given to the YPG," claimed Abdullah Ağar, a military veteran and security expert, claiming that it is only possible for heavy vehicles, since they have trackers on them. Ağar also said that he believes these weapons will probably show up in Turkey in the hands of the PKK.

Speaking yesterday at a press conference in Ankara, presidential spokesman İbrahim Kalın said on their recent visit to the U.S., they were assured that the weapons would not be used against Turkey, yet, this is not enough for Ankara to accept the situation. "From the beginning, we expressed clearly that it is not OK for us to arm and support the YPG. We want to participate in any operation as long as the YPG is not involved. The U.S. can do whatever it wants, but in case of a threat against Turkey, we would take any steps to protect our interests," Kalın said, adding that this U.S. policy does not only bear a risk for Turkey, but also the future of Syria.

On Monday, U.S. Gen. Joseph Dunford, chairman of the Joint Chiefs of Staff, acknowledged that the U.S. was very focused on maintaining its relationship with Turkey despite tense remarks from Ankara about the U.S.'s decision to arm the YPG to liberate Raqqa from Daesh.

Ağar said that in his opinion, this letter fools both Turkey and the PKK. "The U.S. claimed that it has no other option than to cooperate with the YPG [in Syria against Daesh]. However, it had the chance to act together with Turkey, yet it did not choose to," he said, adding that the cost of this is highest for Turkey, as it radicalizes Syrian Kurds while becoming sympathizers of the PKK.

The letter also said that the U.S. is in a tactical cooperation with the YPG-dominated Syrian Democratic Forces (SDF), underlining that the U.S. is guaranteeing transparency in this relationship. The U.S. secretary of defense further stressed that Turkish-U.S. relations have long been based on a strategic partnership before the common aim of fighting Daesh.

Bayraktar pointed to the importance of questioning whether U.S. cooperation with the YPG is tactical or strategic, saying that in contrast to what is written in the letter, he believes that this cooperation is for a long-term project rather than a short-term, tactical move. "In the future, the U.S. wants a Kurdish autonomous state in the region, which is why I don't believe that the weapons will be retrieved, not that they could have been retrieved even if it were desired," Bayraktar said.

"Kurds will pay a heavy price for trusting the Americans," he said, adding that the current U.S. administration is using them only to fight Daesh. The former U.S. ambassador also contended that Washington will not propose an independent Kurdish state in the future of Syria.

Yet, according to Bayraktar, including such a promise in the letter is still a goodwill gesture. "It shows the U.S. does not want to lose Turkey's alliance," Bayraktar said, although it is unlikely that the U.S. would keep its promise.

U.S. support for the SDF has caused tension between Washington and Ankara, as the YPG forms the backbone of SDF forces. The U.S. says that supporting the SDF is the only option for defeating Daesh, while Ankara says an alternative would be to work with local Arab tribes backed by countries in the region instead of supporting a "terrorist group."

Turkey considers the PYD and YPG militia to be the Syrian affiliates of the PKK, a proscribed terrorist organization according to the U.S., Turkey and the EU.