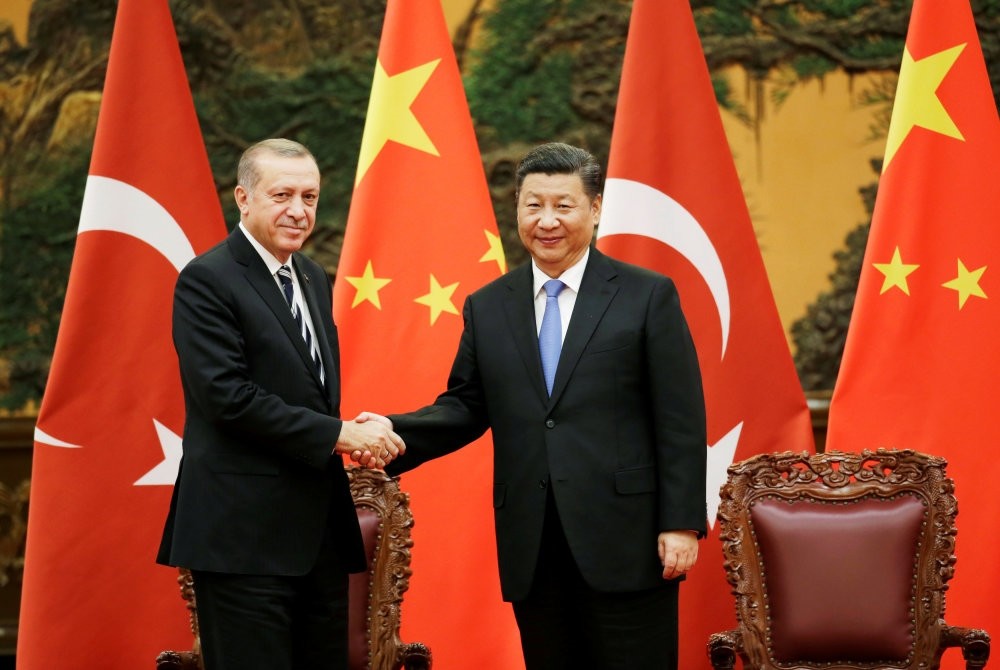 President Recep Tayyip Erdou011fan and Chinese President Xi Jinping attend a signing ceremony ahead of the Belt and Road Forum in Beijing, China May 13.
by Mehmet Çelik Jun 25, 2017 12:00 am

The One Belt, One Road project which will significantly contribute to Sino-Turkish economic and trade ties, is also expected to set foundations for enhancing diplomatic ties between Beijing and Ankara, analysts suggest

As part of Turkey's new approach to foreign policy after the April 16 referendum and a series of official visits abroad, President Recep Tayyip Erdoğan visited the Chinese capital of Beijing to attend the One Belt, One Road (OBOR) forum, an initiative proposed by Chinese President Xi Jinping in 2013. Turkey's active support for the project, which aims to increase the connectivity of trade routes between Asia and the European continent through 65 countries, will also enhance Sino-Turkish political relations and mutual cooperation in social and cultural areas, analysts suggest.

"Sino-Turkish cooperation in the Belt and Road initiative would probably help to overcome the current political stalemate between the two countries. From the Syrian civil war to the Uyghur issue, neither country has a consultation mechanism that would provide a peaceful solution in a serious political crisis. With the establishment of the Belt and Road initiative, Sino-Turkish relations could reach a genuine strategic partnership that was announced in 2010."

Although geographically distant from each other, there are two contending issues between Turkey and China that have affected their diplomatic ties. This is China's position on the Syrian issue, which aligns with Russia's support to Bashar Assad in Syria, and China's policies on Muslim Uyghur minorities.

Temiz underlines that although Sino-Turkish ties have not had significant problems since the early 1970s, with China's economic growth in the 2000s, its foreign policy priorities have also changed around the world. "Central Asia and the Middle East became the most critical regions creating anxieties in both countries, especially since the Arab Spring in 2011. The Uyghur issue and the Syrian civil war are the most critical examples that show divergences between the two countries. China's Xinjiang Uyghur Autonomous Region, which is referred to as East Turkestan by many in Turkey, is inhabited by Turkic Uighur people, which make up about 45 per cent, among other minorities. The Turkish public often raises concerns over and attempts to shape their government's position on China's policies that reportedly repress the Uyghur minority's religious, social and cultural activities. Adding that a diplomatic mechanism must be established to overcome differences, Temiz added: "Economic relations and Turkey's stable political order could be considered another opportunity to overcome the current political stalemate."

As part of its emerging foreign policy strategy, Turkey said its approach to the East, whether an increase in diplomatic ties with Russia or China, is not an alternative to its historic alliance with the West in general and its partnership with the United States and the EU, in particular.

The possibility of Turkey's membership in the Shanghai Cooperation Organization (SCO) has also been supported by China. Chinese officials have voiced a willingness to consider an application from Turkey to join a Russian and Chinese-led security bloc. Ankara has indicated that it is weighing the option. The SCO was formed by China, Russia, Kazakhstan, Kyrgyzstan, Tajikistan and Uzbekistan in 2001 to fight terror threats.

The new initiative, launched on May 15, will act as a modern-day Silk Road, which will decrease travel time between China and Turkey for trade transport from 30 days to 10 days, through newly established and modernized routes, and it is expected to create a $21-trillion trade cycle.

Chinese journalist Jiankun Tang, the China Radio International's Turkey director, underlined that the OBOR initiative is an opportunity to diversify economic and trade relations, which would create the opportunity to establish mutual trust between the countries that is necessary for expanding social and political relations.

Turkey has also built significant projects to integrate itself into the route, including the EuroAsia tunnel, Yavuz Sultan Selim Bridge, Baku-Tbilisi-Kars and the Edirne-Kars railway projects.

"We have seen many great projects in investment, transportation and financial areas, as a result of the One Belt, One Road project. These steps help both countries get to know each other better. The number of tourists coming to Turkey and number of students studying in either country have been rapidly increasing," Tang said.

"Mutual understanding increases trust, and trust is the base of all kinds of cooperation," he added.

Turkey's expanding political influence and China's economic influence in the intersecting region also creates an opportunity for both counties to go beyond their current capacities in cooperation and move relations beyond mere economic ties.

According to Tang, Turkey and China are the two countries that want the Silk Road project to work the most. "Such willingness would spread cooperation to other areas. Be it in Central Asia or Africa, Turkey and China have great potential to cooperate and take mutual steps."

In addition to improvements in economic and political ties, Sino-Turkish relations can be further developed through the exchange of social and cultural ties, which the OBOR project will enable. "In terms of social and cultural ties, China and Turkey are two giant cultural entities of Eurasian land at the western and the eastern frontiers. Turkey has serious advantages to cultivate the multicultural structure of Eurasia with its long historical experiences and geographical features that connect Europe, the Eastern Mediterranean, the Black Sea, the Middle East and Central Asia. Thus, Turkey could be considered the natural hub of the Belt and Road Initiative."

Commenting on areas of opportunity for Sino-Turkish cultural ties, Chinese journalist Tang said in a recent interview with Daily Sabah: "Collaboration between Turkish and Chinese media outlets should be strengthened. For example, TV series, movies and documentaries could be made jointly. Various art groups should be encouraged to perform in each other's countries."