US expects transparency over possible Turkish incursions into Syria’s Afrin 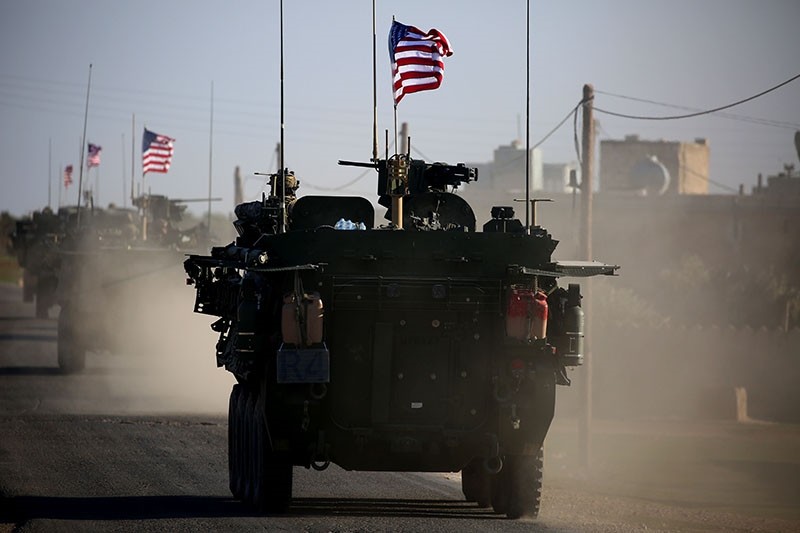 A convoy of US forces armored vehicles drives near the village of Yalanli, on the western outskirts of the northern Syrian city of Manbij, on March 5, 2017. (AFP Photo)
by Ragıp Soylu Jul 06, 2017 12:00 am

A senior U.S. official urged the Turkish government to act in full transparency with its coalition partners about its moves in Syria. The official was responding to a question regarding Turkish military build-up near the Syrian border town of Afrin, where the PKK terrorist group's Syrian military wing is in control.

The American official, who spoke on condition of anonymity due to government protocols, was briefing the media about U.S. Secretary of State Rex Tillerson's upcoming visit to Istanbul on July 9. Tillerson will attend the World Petroleum Congress to receive an award, and he will deliver a speech on energy security and its importance to U.S. National Security.

U.S. officials said they anticipate that Tillerson would speak with senior Turkish leaders about Turkish contributions to the fight against Daesh. Several Washington insiders last week speculated that both sides have been negotiating on post-Raqqa settlement, specifically about what kind of body would take control of the city following the liberation and to what extent the People's Protection Units (YPG) would have influence over the civilian administration.

Despite the U.S.'s guarantees on the independence of the so-called Raqqa Civil Council, the YPG-led Syrian Democratic Forces already appointed Layla Mohammed, a well-known Kurdish figure with ties to the YPG, as co-chair for the council. It is not clear how U.S. would suffice Turkey's demands in this regard.

Turkey also ramped up its military activities near Afrin located north western corner of the country. Reports in Turkish media suggested that Turkish-backed Free Syrian Army (FSA) would try to clear the YPG out of Tal Rifat and then link the Azaz area to opposition stronghold Idlib. YPG commanders lashed out at this scenario on Wednesday and thousands of people with YPG flags protested against an FSA move in Afrin.

Deputy Prime Minister Numan Kurtulmuş initially dismissed the expectations on an imminent Turkish-backed military operation on Afrin, and said Turkey was increasing its military presence as a precaution against cross border fire coming out of the YPG-held enclave.

Meanwhile the U.S. official said, "We want to stay in close touch with Turks on developments on the ground and reinforce our message to them that any action that they take or we take needs to be done in full transparency with the rest of the coalition, to make sure that there are no surprises and that we're working towards the same goal."

Last year Turkey cleared Daesh out of the border town of Jarablus with a surprise operation that caught Washington off guard. Ankara was impatient about the U.S.'s silence over the YPG's further moves toward the Daesh-held city in a bid to link SDF-held territories along the Turkish border.